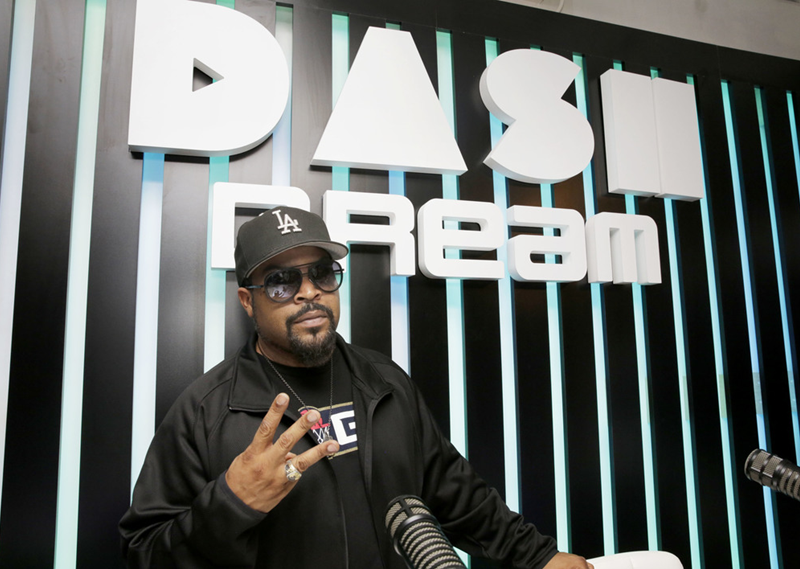 On the night before his 49th birthday, Ice Cube celebrated the opening of Big3Radio — a collaboration between Dash Radio and his BIG3 basketball league. The pop-up event, set in the bustling Hollywood hot-spot Dream Hotel, was lively and packed. Though the three-on-three basketball league has been buried in salacious lawsuits involving a Qatari billionaire and former White House advisor Steve Bannon, the rap legend was in good spirits.

Immediately after arriving at the Dream Hotel, Ice Cube sat down at a storefront studio for an interview with host Tattoo to promote the station, the upcoming second season of BIG3, and his new single “That Funkadelic.” The league boasts of retired NBA players like Metta World Peace, Baron Davis, and Jermaine O’Neal. In a candid chat with Tattoo, Ice Cube explained how the BIG3 league provides basketball fans with entertainment during the off-season. Instead of having to watch off-season games or replays, they have compelling live content.

“What are you going to do, watch fucking baseball?” he joked. The former N.W.A star views his league as building off the familiarity of three-on-three basketball, claiming that its the “most played” form of the sport in the entire world.

Midway through the interview, Compton City Council member Isaac Galvan awarded Ice Cube with a “Celebration of Life” plaque and said that similarly to Kendrick Lamar, he will soon be given the keys to his native city. Galvan told HipHopDX that he gave Ice Cube the award because he is a “guy that came from our community, championed our city around the world, and has been a positive role model.”

DJ Skee, the founder of Dash Radio and co-founder of Big3Radio, explained how he started his collaboration with Ice Cube during the first season of Big3. Following a successful broadcast at one of the games, he decided to team up with the Los Angeles legend. He remarked. “Getting text-messages from him is still a trip because growing up I was such a big fan.” When asked about the numerous high-profile lawsuits revolving around the BIG3, he deflected and said. “I stay in the music side of things. Hopefully, everything gets worked out.”

Scandals aside, the BIG3 league is certainly expanding into an entertainment juggernaut that has cemented streaming deals with Fox Sports and Facebook and now, a radio station.

As he approaches 50-years-young, the entrepreneur is fusing his passions of sports and music while using his platform to shine a light on new artists.

The second season of the BIG3 starts Friday, June 22nd at the Toyota Center in Houston, Texas.

And you — yes YOU — can start streaming BIG3 radio today on Dash Radio.