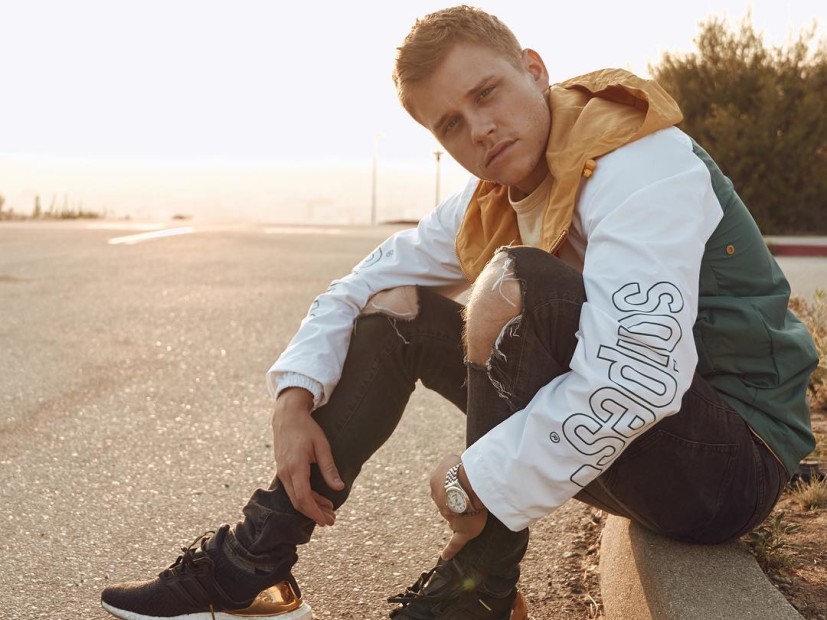 Cal Scruby Is Honest About White Privilege In Hip Hop

It’s not so much that the 28-year-old is ashamed to be a rapper who happens to be white. The assumption of how the context of his music should play out is what really irks him. Never mind, there’s the constant struggle to remain in the good graces of his supporters.

Best known for his fan-favorite cut “Keanu Reeves,” Scruby opens up with HipHopDX on the concept of white privilege in Hip Hop and also gives his perspective on what it really means to be that dreaded term, “white rapper.”

Once upon a time, he deemed it to be a compliment when fans told him he was the only rapper they liked but didn’t actually like rap music.

“I thought I was opening people’s minds about the genre,” he admits during our interview at the Riveting Entertainment offices. “What I think that means often is, ‘I like Cal Scruby because he’s white.’ Maybe that’s not a conscious decision to these people but that’s where it ends up at. How can you like rap, which is a pillar of black culture but only like white rappers? You tend to like people who look more like you and they don’t try to fight that concept.”

Although he says he hasn’t been accused of cultural appropriation yet, he makes fun of his whiteness in his music video for his Redman-featured song “Do or Die.” In the music video, comedic actor Michael Rapaport sits in the director’s chair next to New Girl‘s Lamorne Morris while ranting about not wanting to do a visual for a white rapper. Rapaport insists there is nothing fascinating about another white rapper wearing a grill, while Morris tries to convince him otherwise.

“Why the fuck are we here Lamorne!?” Michael yells into a megaphone.

The clever music video, which features Cal and Redman dying before coming back to life in spirit form, was put together by Riveting Entertainment, where Cal holds a partnership with the production company’s owner, Andrew Listermann.

Listermann’s now-business partner Scott Sheridan, who owned a bar in Cincinnati at the time, told him he should check Cal out at a concert being held downtown, which is how he got discovered. Although Andrew never made it to the show that day, happenstance would have the two meet at Sheridan’s bar later that evening and they exchanged contact info. Already familiar with Riveting’s visual work (for artists like Chris Brown, Tyga, Justin Bieber and Big Sean), Cal hoped he’d at least get an email or something from him one day. It wasn’t even a week later Cal was flown to Los Angeles to work with Listermann.

That’s when he began to take rap seriously, although he admits he got a late start.

“I was about 22 years old when I started rapping,” he says. “It was right after I broke up with this girl who didn’t want me to be a rapper. I was like, ‘I’m going to be everything you don’t want me to be.’ I was a junior in college and I was an engineering student at Ohio State, but I had no passion in it. My passion had always been writing. I wanted to be a journalist for most of my life but because I was a good writer I took it for granted. Anything that’s easy for you is not that important. I took a bunch of math courses and things that were hard for me and shit I wasn’t good at or cared about.”

Taking the route less traveled seems to be something Cal naturally gravitates toward. He enjoys the challenge of being a rapper and says it’s not easy. Where he’s from it’s expected for people to work a corporate job, buy a house and raise a family — not become an artist, rapper, dancer or anything else in the creative realm.

“Rapping makes me happy, it’s a struggle and I don’t think there are any other struggles that I would enjoy more than this,” he reveals. Being at someone else’s mercy isn’t Cal’s style, which is why his partnership with Listermann works so well.

Since moving away to Los Angeles from his hometown of Lebanon, Ohio, he’s recorded music with a lot of big names and has embraced an opportunity that he wouldn’t otherwise get living at home. One of his more popular songs, “Ain’t Shit Changed,” features Chris Brown and has more than 6 million YouTube views. Brown is someone Cal has known for quite some time. He’s consistently shown Cal mad love, including posting one of his freestyles for his 43 million followers on Instagram to witness.

“For the first 10 minutes I was like ‘Damn, this didn’t pop off how I thought it would,’” he says about what happened after Brown posted his freestyle video during the middle of the NBA Finals. “Then all of a sudden my Instagram started exploding. I probably picked up about 20,000 or 25,000 followers. I didn’t expect it at all.”

Nevertheless, Cal acknowledges he’s successful in part due to his large conservative fanbase. He also suggests it’s the same fanbase that abandoned Eminem after his 2017 BET Hip Hop Awards Cypher that lyrically ripped Donald Trump to shreds. Cal publicly condemns Trump as well and is over the threats of so-called-fans who brag about listening to him since the beginning but threatening to abandon him over his political views.

“There is definitely a privilege to being a white rapper, or just in life. I think because I have a conservative fanbase and I know this because since Donald Trump got elected and I’ve spoken out against Trump I’ve received backlash from people who are like I’ve been listening to you for four years and you’re too political so I will no longer listen to you,” Cal confers. “I have come to accept that. That’s their perspective. I didn’t recruit them as a fan so if you don’t like me or what I talk about then you can go listen to whoever.”

As we spoke about his experience of being part of culture that was born from the pain and struggle of black people, without asking, he expresses how eager he is to contribute to the culture in a positive way and insists he doesn’t want to be one of those white rappers who doesn’t acknowledge black people but still benefits financially from Hip Hop.

Cal names Drake, Big Sean, Kendrick Lamar and J. Cole as his biggest influences and doesn’t care for the G-Eazy and Eminem comparisons. He’s actually inspired by Cole’s album-making process, which mirrors the current approach for his next project. All he does is record when he feels like it, so he can build a hefty music collection he feels confident enough to pull music from that will accurately tell his story. Connecting with producers and artists from Ohio is a must and will be what his next project will consist of (including fellow Ohio rapper Insomniac Lambs, who was with Cal at Riveting Entertainment discussing a collaboration and sifting through beats when I arrived).