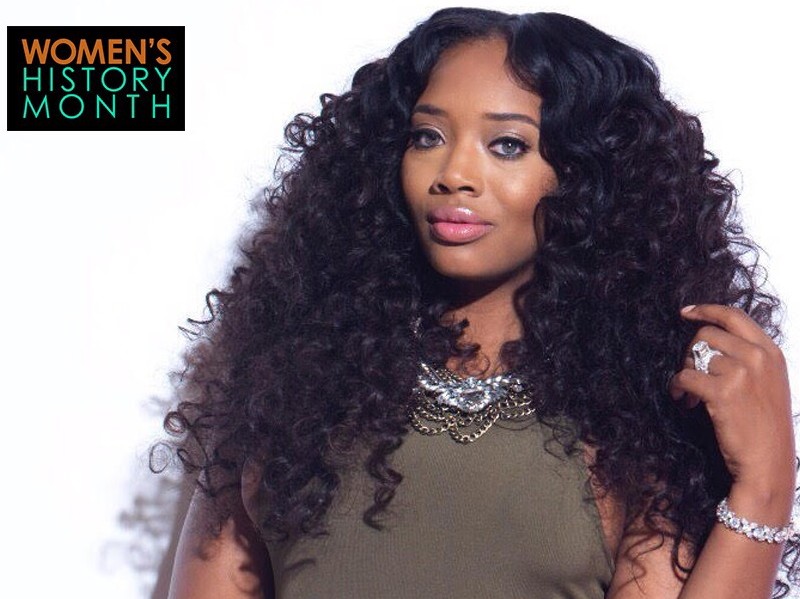 To close out women’s history month, HipHopDX wants to take the time to highlight undoubtedly one of the most dominating women in the rap business: Yandy Smith.

To many, Yandy Smith is known as cast member and co-creator of the television franchise Love & Hip Hop, but take a look beyond the screen and on to her extensive professional resume that spans over a decade, and you can understand why she was named in 2008 by Billboard Magazine as one of the “Top 30 Executives Under 30”, well before her days in front of the camera.

“I always had dreams of being that 1% that did it on her own, that stayed up a little later, that went the extra mile, that researched a little more, that took the tough road, and made it. And I did.” she comments on her milestone accomplishment.

Before she became a prominent television personality, Yandy was already making big moves within the Hip Hop game with managing talents like Missy Elliott, Jim Jones and Busta Rhymes. For Yandy, having a career in the music industry was something that she says happened out of the clear blue sky. Before graduating from Howard University, she had a long-standing internship at The Gap corporate office and was determined to start a career in merchandising. After encountering a career setback, Yandy left behind her internship at The Gap to work for Violator, the multimedia management company founded by the late industry giant Chris Lighty, a company that has been responsible for managing the careers of rap legends such as Fat Joe, 50 Cent, LL Cool J and Nas.

Yandy recalls her early days at Violator, working as an intern to Mona Scott-Young, one of the powerful women that would eventually be responsible for helping produce the reality television franchise Love & Hip Hop. Yandy explained how her responsibilities started out small.

Mona taught me… So many power moves, income generating moves, conducting business moves, staying above par moves, never settling for status quo moves, never compromising my morals or integrity moves, balance owning businesses and managing family moves…I can go on for days but I’ll say it’s now time for me to teach those moves. My goal is to help build up 5 six figure earners this year. My personal mission is to pour into a few because someone poured into me. Hopefully, one day someone will say Yandy taught me…@monascottyoung I love you birthday girl. (We celebrating the whole month) #EGLWIN

Under Mona’s wing, Yandy proved herself to be a highly valuable asset to the management company by consistently going above and beyond the expected responsibilities of a typical intern. By the time she was ready to move on from Violator Management, she had been touring as the only manager among 30 people, traveling with Missy Elliott, her staff, and her dancers. After leaving Violator, Yandy began working as Jim Jones’ manager, a gig that lasted a little over seven years. Having learned much about the music business from her time at Violator, Yandy was able to secure a joint-venture deal with Columbia Records for her client, a deal she describes as one of the biggest deals she’s ever gotten for a client.

When Yandy first became a cast member for Love & Hip Hop, she knew that as a business women that this was the perfect opportunity to further establish and market her personal brand.

“I knew that this was an opportunity to have free marketing of whatever I wanted to market,” she says. “I knew that one thing I wanted to market was the Yandy brand, which is all things Yandy.” From there, her women’s lifestyle brand Everything Girls Love, which got its start as an accessory company in order for Yandy to market and capitalize off of something tangible came to be. After her first season on the show, Yandy realized that she had a talent at giving advice to the younger female cast members about their careers and their love lives. When her accessory line email began blowing up with questions from regular women about how to improve their own career and love lives, that’s when Yandy knew that she had something great to work with.

After her first season on the show, Yandy realized that she had a talent at giving advice to the younger female cast members about their careers and their love lives. When her accessory line email began blowing up with questions from regular women about how to improve their own career and love lives, that’s when Yandy knew that she had something great to work with.

“I was like, oh my god.” she recalls  “Something that I need to do with this is create a blog that tells women everything they’d love to know. And that’s kind of where the birth of Everything Girls Love the lifestyle brand came about.” she explains.

In addition to the lifestyle brand, Yandy also owns Yelle Beauty, a beauty brand that sells hair and skin care products to women internationally. She also has authored a children’s book titled My Blended Family,a book that was inspired by the circumstances of Yandy’s own family.

Adding to her long list of successful business ventures, Yandy has begun a new production company that currently has seven shows in the works that are either in the development or pre-production stages. One of the shows under this new production company includes a show that deals with the dynamic between police officers and the common man.

Being able to start this all natural plan based skin care line @yelleskincare has been such a huge learning experience. Never knew how much it would cost to formulate, test, mass produce and now market a successful line. All you new emerging entrepreneurs…Protect your finances!!! Build your credit and leverage it to start your business. If you need to know how DM @modern_domestic and Simply put credit. One more thing! What you put out there you get back. Support other small businesses and the universe will have others support you. I know your favorites might be some expensive Sephora brand, or a brand on the shelves at Target but those brands once started out right where I am. So come out and support me at the show (Essence, Bronner, IBS), go to my website, then click and order. Give it a try???

“I don’t want to tell too much about the show,” she says “We are actually going out and shooting. But it’s going to be something that we hope will change the face of the interaction between civilians and police officers.”

Yandy is undeniably a black woman of great accomplishment and ambition. To women and men alike who see her as a powerful role model and may one day want to follow in her footsteps, she gives this advice: “Know what you want, know your purpose, know what drives you. Always remember that first no is not enough. The first ten no’s are not enough. Always keep it pushing”.