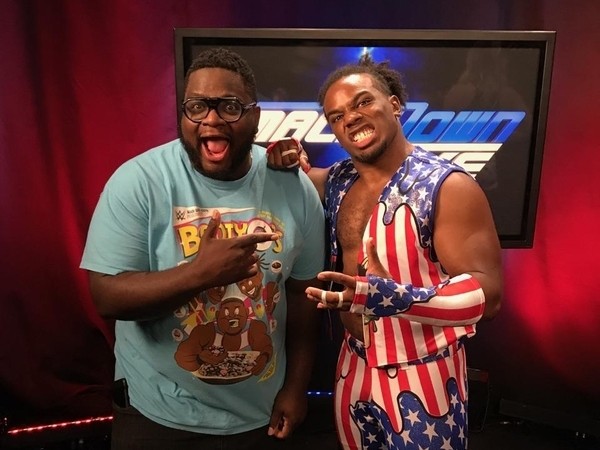 Mega Ran Explains How WWE's Rap Battle Came To Be

WWE Smackdown received lots of social media buzz for a different type of clash in the squared circle on Tuesday (July 4). Instead of wrestling, the company staged a rap battle between two of their biggest tag teams: The New Day and The Usos. The battle was hosted by Wale and featured plenty of references to battle culture such as the “Don Demarco” drop and Loaded Lux’s famous “you gon’ get this work” line.

Wale wasn’t the only rapper involved in the popular segment though. Mega Ran, a longtime friend of The New Day’s Xavier Woods, was part of his buddy’s entourage in the ring and actually helped the group prepare for the battle.

Two weeks ago, Woods told Ran about a rap battle idea he pitched to WWE’s creative team and his desire to get the veteran MC involved. By Sunday (July 2), WWE had contacted him about being on Smackdown.

The day of the show, Ran arrived at Phoenix’s Talking Stick Resort Arena with Woods, and met an assortment of wrestlers and crew members. The New Day were given their script for the show, which originally had Wale set to kick off the battle with his own rhymes. Big E, a member of The New Day, said it wouldn’t work. The other members and Ran agreed, which led to a change. Soon after, the trio began practicing their raps, which Ran swears he didn’t write.

“For everybody who’s asking me, I did not write rhymes,” Ran tells HipHopDX. “I just kinda sat and listened. I helped them with their deliveries and getting down the cadence and stuff.”

Although the producers of the segment requested both teams send in their rhymes for the script, only The New Day obliged. The Usos showed theirs to one producer, but made a point to not let The New Day see their bars, which referenced a salacious story involving Woods.

“[The Usos] were able to write rebuttal lines,” Ran revealed. “I felt it gave them an advantage. They might’ve gotten a little better crowd response, but they went a little below the belt to get it.”

Although Ran is used to performing in front of big crowds, the MC said being in a WWE ring was nerve-racking. While hanging out with Wale backstage, Ran admitted to jitters about his role. Wale tried to play it cool, but Smoke DZA, who was also in attendance, egged the D.C. rapper on in an attempt to make him cop to some anxiety.

“Luckily, we had a walkthrough,” Ran said. “We got to come up on the ramp and see what it’s like before we went live. It went great though. The producers were going crazy and saying it was awesome when we got to the back. It was like we won the Super Bowl.”

Ran, a lifelong wrestling fan, is excited about the possibility of more opportunities with WWE. With Ran’s reach in the video game industry, it’s easy to see why Vince McMahon could view him as a potential asset to the company.

“Hopefully, this is just the beginning of a relationship with the WWE,” Ran said. “I would love to work on music projects with them and this could be a great start.”