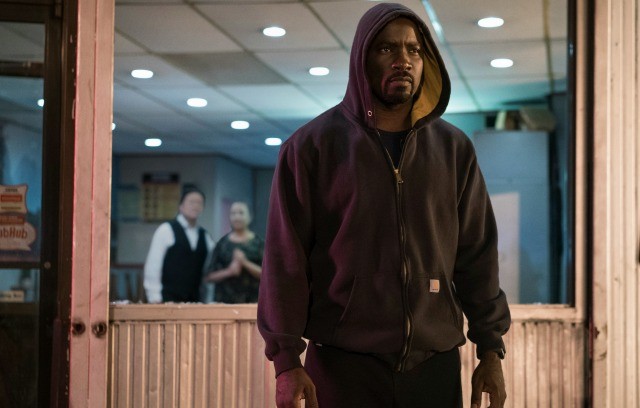 Today, September 30, Netflix has birthed a diamond in their new series, Marvel’s Luke Cage. The lesser-known superhero of the world’s most popular comic book lineage has brought more to the pop culture than most people realize. The NYC “Power Man” is among one of the first African-American superheroes to maintain longevity and Hollywood A-lister Nicholas Cage (born Nicolas Kim Coppola) actually adopted the moniker to avoid being accused of getting favoritism by being related to the great Francis Ford Coppola.

Yes, for many comic fans, Cage is much more important than being the hubby of Jessica Jones and series showrunner Cheo Hodari Coker is well aware of this. After two long years of plotting, strategizing and anticipating, em>Marvel’s Luke Cage is already garnering rave reviews and a second season is all but inevitable.

Coker, 43, is no stranger to engaging Hollywood cinema that speaks to the hearts of Hip Hop fans. Having created the Biggie biopic, Notorious in 2009 which appears to a direct inspiration for the upcoming Tupac film All Eyez on Me, he has gone on to spearhead several documentaries on rap legends and even co-executive produced Showtime network’s bread and butter drama, Ray Donovan.

Aside from the score, Marvel’s Luke Cage is rooted in classic Hip Hop for each episode has been famously named after a Gang Starr record. While speaking to Coker, HipHopDX got the scoop on why Guru and DJ Premier’s iconic brand was chosen to represent Luke Cage’s noble conquest through the streets of Harlem and how usage of the n-word affects the show’s semblance.

HipHopDX: I want to dig deep in the whole Gang Starr episode setting. You used music from Wu-Tang Clan to build up pivotal scenes and the show is set on the East Coast. We could have went with Public Enemy for the political angle or M.O.P. for the kick-in-your-door titles. Even Cam’ron on the Harlem tip. Why Gang Starr?

Cheo Hodari Coker Well, Gang Starr for me, it wasn’t about the content of music as much as it was about the song titles. One of the old tricks we used to use back in the day in music journalism is we used to pick a song for cover line. No matter what group you’re talking about. If there’s a cool cover line you can do that and then simultaneously as a huge fan of Shonda Rhimes, she also names a lot of her shows. Original episodes of Grey’s Anatomy after different songs. So it was really just a combination of just like finding songs titles that resonate and then seeing how you can build cinematic resonance with your story and your characters. What I noticed in going through my iTunes is that Gang Starr songs always had that kind of presence and so it just worked basically picking those song titles and making it into something. The first episode is really about that moment of truth that Genghis Khan is when Luke Cage decides to become a hero. And then “Code of the Streets” is about the ramifications of stepping up and finding out that there is a code that they just violated. The third one in “Who’s Going To Take the Weight?” is really about Luke now stepping up and doing something that from which there is no going back, so he’s going to take the weight of taking down Cottonmouth and put it on his shoulders.

All the different titles reflect on the character in an interesting way. But then at the same time on top of everything else, it’s a great playlist. So it’s funny a lot of people actually listened to all those songs, thinking ‘Hey, maybe I’ll get some insights into the show’ but there wasn’t a real invest in the show from the songs but what they did get was an education on real Hip Hop so I think it served a double purpose.

DX: How do you elaborate and explain to a lot of Marvel Fans, typical comic book readers, they’re going to be thrusting for this pseudo-urban, Hip Hop world, and really get a crash course of the n-word outside of the music?

Cheo Hodari Coker My whole thing is like when you listen to Hip Hop they use “nigga” for rhythmic presence. It’s just business. Like it has no meaning. Every single time you hear that word, it should bother you, on some level. Or at the very least in using it you’re not amongst mixed company, You should have some feeling about it one way or the other. Because honestly within Hip Hop we’ve been talking about that forever. My whole thing was like, it’s not about the use of the word, it’s when and how. It shows from a character standpoint your perspective on the world. In some cases when that word is used, the people that are using this word are clearly ignorant and from their perspective, in real life they wouldn’t care what you think of them in using that word. On the other end, when Luke hears the word, in that pivotal scene and then flips it, it’s his frustration building in what he’s trying to preserve and protect and what he’s tasked with now that his pop is gone, and that he has to really step up. My thing with that I want to give it a certain meaning. And yes there are people that say, ‘you can’t use that word’ but I never hear anybody tell Quentin Tarantino that. So my whole thing is like, it’s more offensive to tell me that I can’t use the word, than me to actually use the word. When creatively I felt as the show, it was necessary.

DX: I think it gives the show a dynamic that we’ve haven’t seen. Not only in just the Marvel Universe but television theory. The first time since The Wire.

Cheo Hodari Coker Anytime anyone brings up the W-Word, I’m honored. The most you can inspire with this kind of show is to try to walk in those footsteps. David Simon laid such an incredible template to tell a fictional story that still has cultural and political relevance.

DX: What do you think Gang Starr’s best album is?

Cheo Hodari Coker I loved Hard to Earn, my favorite record from them is probably Step in the Arena. But then Daily Operation is also another great one. Those two records back to back to back I think were great records and still resonates to this day. I don’t think people talk about Gang Starr’s relevance enough. Thing is, is that even though they split up, what DJ Premier did with Biggie and other artists he produced, their sound in deeply into Hip Hop. I think it was Guru’s passing, people really now have a much appreciation for him as an MC. I think when he was alive, they thought that he was intelligent, that he was important. They thought his rhyming was more serviceable and artistic. And I think now in retrospect when you hear him, now you really understand what a great MC he was.

“I never hear anybody tell Quentin Tarantino [you can’t use the n-word].” — Cheo Coker on Luke Cage’s character dialogue

DX: Would you rate any of those albums a DX perfect rating?

Cheo Hodari Coker No, because I think there’s so few records that rate the perfect rating. Enter the 36 Chambers, Only Built 4 Cuban Linx, Midnight Marauders, The Chronic 2001, there are very few record that are just perfect.

Marvel’s Luke Cage is streaming on Netflix right this second. Stay out of trouble and binge watch by clicking here.