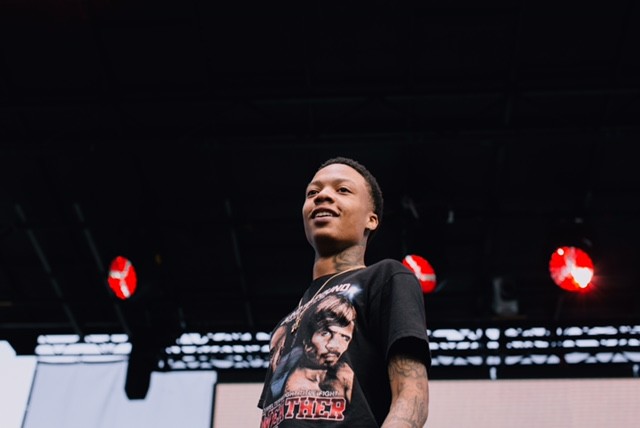 “I need a lint brush,” Levi Carter, a Roc Nation signee, said in a stream of self-consciousness to his manager Law in the lobby of Philadelphia’s Logan Hotel. Hours ahead of his Made In America debut, the Virginia by-way-of-the Bronx rapper had a confident air, but part of him understands that he’s largely considered an unknown to this year’s festival attendees. So having a slight case of the jitters, and a desire to make a great impression as well as look his best, in that moment, is definitely understandable.

“My manager gave me this white sweatshirt [to wear] over my shirt.” We’d share few words outside of these, other than a brief introduction just before, until moments after he stepped off of the MIA TIDAL stage later that afternoon.

However his manager Law, who also serves in a management role for the oft-recluse, yet outspoken rhymeslinger Jay Electronica, spoke rather highly of the rising spitter. “He’s so smart,” Law said, “and he can rap. Artists like that deserve a chance.”

Reconvening at the TIDAL stage, Carter, 22, clad in a now lint-free black Floyd Mayweather-Manny Pacquiao promotional t-shirt from their 2015 bout, black denim and a pair of shadow grey Air Jordan 1s, sat laser focused in anticipation of his big moment. His friends (including his DJ and photographer) seemed more anxious than he. But one moment broke his gaze.

“Yo, ScHoolboy [Q] came out,” a constituent alerted Carter. TDE’s resident Hoover Crip was a surprise guest during SZA’s set, performing his infectious single “THat Part.” And in that moment, Levi, an aspirant star in his own right, became a fan just like the thousands of people in attendance.

Fresh off of the release of his Presence of a Lord project, and an EP titled A N T I S O C I A L released in February, Carter was well prepared for his 30-minute set with songs like “You Not Gang” and “Finessed.” He’d go on to make the best of the time he was given on the TIDAL stage, which was positioned near the main entrance on the Ben Franklin Parkway. Although the stage stood a great distance from where lauded acts of the day like Rihanna, Lil Wayne and 2 Chainz as Collegrove, and more would perform, Carter showed his ability to capture and retain his audience.

On stage, Carter’s bravado oozes New York City’s spirit, but he proudly claims his Virginia roots, a move that shaped the rapper into the artist and man he’s grown to become. “It just made me anti-social, if anything,” he said of his relocation to the portion of the 757 area coined with the infamous nickname of “Pistol City.”

“I don’t fuck with a lot people, because it’s too many people getting killed. There’s too much shit going on.”

Carter’s music is rooted very much in present times, an amalgam of the ever-shifting prism of Internet culture and the spirit of the streets. Therefore, navigating his peer group doesn’t appear to be a problem. But the Internet’s influence on rap music, which accompanied a changing of the guard, shifted music sonically, and broke identity barriers previously bound by proximity, is a major contributing factor in the rift between elder and younger Hip Hop fans; the former have deem this generation unoriginal, a belief the Roc Nation artist doesn’t subscribe to.

When asked what his era of rappers will stand for in the end, Carter replied, “The truth.”

Carter speaks with candor, but shows respect towards the topics he discusses like someone twice his age. This showed in how tactfully he gives his opinion on the divisive topic of Lil Yachty admittedly not being a fan of Tupac Shakur or The Notorious B.I.G.’s music.

“My moms was brought up on Biggie and Pac,” Carter said, affirming his personal knowledge of the legends.

“I don’t even think Yachty was saying he doesn’t know who you they are, he just saying he never listened to their music,” he continued. “You like what you like. That’s that man’s opinion.

Younger Carter: Levi rocks the Made In America TIDAL stage on September 3, 2016

“You’re supposed to know the legends, but that doesn’t mean you have to listen to them.”

In taking a moment during Carter’s set to ask Law how he decides to manage acts while holding such a talented roster, he simply said, “Dope music.”

“I get my co-sign from Hov and Jay Elect. I rock with artists who could do it on their own, with or without Roc Nation’s help.”

After alerting Carter of his manager’s endearing words, he confidently replied, “I was moving before I met him.” That is the tale of a hustler in the Internet age.