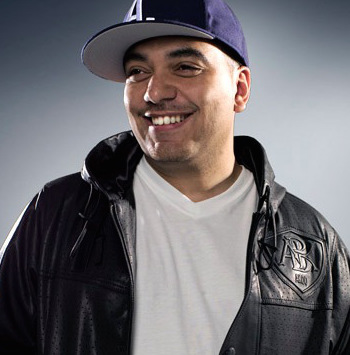 Cipha Sounds feels better than ever at this point. Despite leaving Hot 97 last year in a fairly dramatic and highly publicized fashion, he has essentially been on a roll. Alongside signing with Roc Nation in February he’s still been making rounds as a comedian. However, he’s still been putting on for New York Hip Hop through Queens collective, Dem Boyz From The Wood. Taking time to speak with DX, Cipha talks discovering the Latino rap group, his relationship with Roc Nation and upcoming television plans.

Cipha Explains Involvement With Dem Boyz From The Wood

DX: You’ve been doing a lot lately. Let’s talk about your relationship with Dem Boyz From The Wood for a moment.

Cipha Sounds: I met their manager Eric; great guy. I actually met him in the airport when I was going to LA. He told me he had a group and I mean, people approach me about it every single day. I just “yessed” him to death like I do everybody else and he managed to get my email address because it’s all about your approach. His approach was real cool and real professional. He sent me their music and I didn’t listen to it for like probably a month or two later. I was going through my emails and I was like, “what’s this?” Then I listened to it and I was like awwww shit, this is a gold mine. From there, I just called them and linked them up with my team. We’ve just been working ever since.

DX: How do you make a group like that pop today considering your history in radio along with understanding the difficulty of breaking New York artist? What’s your approach?

Cipha Sounds: There’s no right formula. It’s all case by case so, I try to start with their core and go outward from there. Back in the day, I use to definitely use the radio as a means of promoting a group. Nowadays, there’s a lot of groups that pop without even being on the radio. They just can put their stuff online. I just do what I know and my expertise is to get them over the right music, get them in front of the right people and let it grow from there. It’s like you just do the work and when you see something seems to be working, you do more of that.

DX: Anything specifically you’ve taken from your time in radio or time being around so many legendary artist?

Cipha Sounds: Ah yes, everything. I’ve always listened to them because I don’t want a group that only makes radio songs but, I also do want songs that work on radio. So, I think I have an ear for that. I’m like a sponge. Anytime any artist or successful person says anything, I eat it up and just keep it in a memory bank for use later. My goal is to put something out and see if it works or not then go from there.

DX: What’s the “it” factor about them from your perspective?

Cipha Sounds: There’s a lot. They’re a whole bunch of Spanish Kids are good looking kids that are all the same height. Like I would call them, they look to me almost like a boy band. You just expect them to spit fire when they rap. The energy is crazy and they got a real wavvy feel to them. They’re like this young crazy energy but they really rap. Like, I know a lot of people who have energy but they don’t rap that well. They just sell their personalities but these kids really can fucking rap. They’re Spanish kids but they’re not like overly Spanish rappers. They’re not trying to be Spanish rappers. They just happen to be Latino.

Cipha Sounds:  I mean, I don’t know. I’ve been down with Roc for a long time. I use to work at Roc-A-Fella. Me and OG Warren real cool with Jay. So, it’s just family. Like they manage me and I am working on some other technology stuff with them along with some comedy stuff. Roc Nation is like you can’t go there, just kick your feet up and tell them to do the work. Like, you gotta have a plan and they’ll fit the pieces to your plan. Roc Nation is great. I know so many people that work there from back in the day from the music industry and these new sports people. It’s a great place for like a place; place for the most exceptional people. Like Hov is one of my biggest inspirations. Not just music wise of course. He’s the illest rapper but, how he changes and takes something new ; takes risks and makes it big.

DX: How does it feel seeing Hov go from Roc-A-Fella to Roc nation? Must have been something momentous to witness firsthand.

Cipha Sounds: Yeah I mean, I was with the team like literally from the beginning. Like literally from nothing into this huge organization but, I always was like an outside cousin but now I feel like in the family. I’ve been invited now, I feel like I’m a made man. Jay doesn’t do anything that a lot of people can’t do. He just really works hard at it, has great ideas, great staff and a great team. He’s never like a lazy rapper which I can’t stand lazy rappers. When you gotta opportunity to do something and they don’t do, it like that pisses me off.  I plan on bringing the kids to at least present them to Roc Nation.

DX: Let’s scan the radio, like I said it’s been awhile since you’ve been on radio on HOT 97. What do you think about the state of radio as it is now?

Cipha Sounds: I honestly don’t even listen to radio anymore. I can’t even say.

DX:The biggest news of the last couple of weeks was when they had the launch of Apple Music and the Beats1 Radio. Do you see that as the future of radio?

Cipha Sounds: Yeah, I mean it’s not the future but just a different rampant of it. Like radio, it was one thing and then it evolved. Radio has always evolved, it’s just now evolving into the digital era. Back in the day, radio was just for like news and then they use to have entertainment programs and then it turned to music. It’s always evolving. Broadcasting has always been there.

DX: Do you even see a time where internet radio eclipses terrestrial radio?

Cipha Sounds: I don’t know, it could but, it’s all about the technology. It’s not that internet radio is better or one is better than the other. It’’s just literally the technology. It’s not any different, it’s the same thing, it’s just the way it gets out there. If the internet becomes bigger then it’s a hard issues to deal with because we’re broadcasters not a just a receiver so there’s not a enough data. So price wise holding a radio station, terrestrial radio is way more business friendly.

DX: Let’s get to your comedy man. What’s comedy like now for you right now ?

Cipha Sounds: I always did comedy. I was always funny because you know the morning show was a comedy show that was just surrounded by music. So now, I stepped away from the music part and focused on the comedy more. I’m working on two TV shows, I got a web series I am about to put out but, it’s all music related. I always have different music artists in my shows and in my improv shows that I do on Fridays. Like to me, it’s all put together, the only difference is I’m not on the radio anymore so people look at me like I just do comedy now but, I already was doing it. I was always working on TV stuff. The reason why I stayed at HOT97 for so long is because we had that VH1 TV show and I was hoping that was going to spark off. It wasn’t as big as we wanted it to be but that was my intro to the TV world.

DX: What did you learn from the HOT 97 television show exactly?

Cipha Sounds:  The most I learned about that was like all the behind the scene stuff. The show-runner basically took me under his wing and I use to be part of every aspect not just being on the show. I learned about shooting, producing and how to run a show from evey angle of it. Editing, scheduling, wardrobe all that shit. I just use to be be around there every day learning  because that’s the world I wanted to get into. The politics, the politics are crazy.

DX: With everything you got going, how do you keep everything compacted and streamlined ? You seem to be doing a lot at the moment.

Cipha Sounds: Yeah that’s the whole team. I learn that back listening to old interviews back in the day. If you listen to successful people like Dr. Dre or even fucking Steve Jobs, it’s all about the team. I can’t do everything, Drewsky handles a lot of the music, the Djing, the Radio. Jamal our other partner handles the marketing, scheduling and management. Now we hooked up with Eric with Dem Boyz but, Eric is super on point. I like Eric because he has his own opinions and he also listens to veterans in the game. So they’ll be like, yeah I’ll let you do this and he’ll give his opinion and we’ll always meet in the middle. Then we got our Godfather of the whole operation this guy Christian Cappazola. He’s like a old school legend.