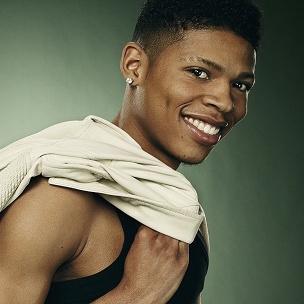 This week, DX chats with rapper/actor Bryshere Gray a.k.a. Yazz about his role as Empire Enterprise’s prince Hakeem Lyon. Besides his role as one of Lucious’ potential heirs, the Philly native breaks down life before and after Empire, working with Timbaland and “Drip Drop.”

From Bryshere to Yazz to Hakeem

DX: How’d you get the nickname Yazz?

Yazz: Yazz was something I created while trying to form a rap flow and it just turned into that. I didn’t want something that sounded now, just something different.

DX: Before we talk about Empire, how’d exactly you got into Hip Hop?

Yazz: I got into the Hip Hop world after breaking my arm playing football in high school. This is when I got into my craft of rapping. I was 16-years-old and I just fell in love with music. I was so eager for the world to hear me. At the time I was broke, my mom needed bill money and I was trying to figure out changing my life’s situation. This is when I started hitting the streets of downtown Philly, started performing with two back-up dancers and we started performing like it was Madison Square Garden. We would do that for like five hours on Fridays and Saturdays where we made somewhere from $200 to $1,000 a day. I stumbled across my manager Charlie Mack and he’s been my right hand man since. We were working with each other for about a year and he eventually got me an audition for Empire. I sent the audition video to Lee Daniels and Danny Strong then they flew me to L.A. and the rest was history.

DX: How exactly did you end up getting gigs on Made in America Festival and The Roots Picnic along with opening up for Fabolous and 2 Chainz?

Yazz: I actually started putting together a free school tour around my neighborhood in Philly. It was a powerpoint, free program for someone to go to various schools where I looked cute for the girls and the dudes thought I was fly. Plus, I was old enough to where they would listen to me in terms of performing. This is when my fanbase grew a lot. This is when all the festivals like Made in America and The Roots Picnic started to pay attention. From there, things got bigger and bigger.

DX: When did acting come into the picture and why Empire in particular?

Yazz: I originally didn’t look into acting at first. My manager was like look, I got this opportunity that may change your life. Once he gave it to me, I was like this is what you’re talking about? I took the experience, got the make-up done with the black eye and really got into character. I had to do the scene where Terrence said, “I seen you’ve met your momma” from the first episode. When they flew me to L.A., I auditioned with both Terrence and Taraji.  They loved it and that was literally my first time acting, it was all instinct. Now I’m professionally trained by the best but before I was just raw.

DX: They could have chosen someone else. What was it like auditioning with them let alone acting besides them?

Yazz: Surprised man. I was so surprised to be auditioning next to two people I highly respect. I’ve been inspired by both of their works and now I’m auditioning right in front of them. That blew my mind and made me go harder.

DX: Was there anyone within music that you drew from in terms of inspiration for the role?

Yazz: I just basically made Hakeem my own. I wanted to make sure to be 100 percent honest with the character. I had to make people uncomfortable and make people hate me in certain situations. I packaged rappers who are out today and tried to be honest. How does this rapper feel about this situation? What do they go through? What kind of distractions do they deal with? That’s why I keep Hakeem honest.

DX: What separates Yazz from Hakeem?

Yazz: Well with Hakeem, he doesn’t want to work. He doesn’t want to do anything that’s really going to get him where he wants to be. You have to understand that his whole life, he was a millionaire; spoiled kid. He’s really never had to work for anything so he’s a product of his habitat. I think it’s great for Hip Hop and Hakeem brings a new perspective to the industry but Yazz is different because he’s more ambitious. You know Yazz has had to struggle to get where he is now.

DX: From your perspective, is Empire a true representation of how some aspects of  the music industry really operate?

Yazz: I think they’re very true in terms of storyline and characters as far as situations go. Lee Daniels and Danny Strong are very hard on the writers to bring truth.

DX: Talk about “Drip Drop” for a second. It was featured on yesterday’s episode right?

Yazz: It’s a wonderful record featuring Tiana Brown [Serayah McNeill] and it’s very sexy. Ladies are going to get hot flashes when they hear it.

DX: Talk about what goes into the making of music from your standpoint for Empire. Do you work directly with Timbaland?

Yazz: Well I’ll be on set filming in the studios for 14 or 15 hours. Once it cuts, I’ll get a call to hit the studio and record with Timbaland. Most of the time, the song will be written already. We go in and vibe. If we need to add or take something out we do it there. We just have fun. Working with Timbaland is great, you know he’s worked with a lot of great artists. I feel like I’m playing with Michael Jordan.

DX: WIll the world eventually see a collaboration between Yazz and Timbaland?