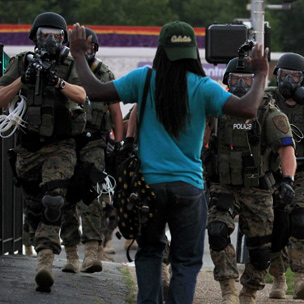 “I already know the deal but what the fuck do I tell my son / I want him living right living good, respect the rules / He’s five years old, and he still thinking cops is cool / How do I break the news that when he gets some size / He’ll be perceived as a threat, or see the fear in they eyes / It’s in they job description to terminate the threat / So 41 shots to the body is what he can expect…” -Talib Kweli, “The Proud.”

Each week, we can usually count on at least one rapper doing something that ranks between idiotic, inspiring or incredible. That’s what we hope makes Stray Shots work. Events happen and due to industry politics or just straight up cowardice, they seldom get a candid dialogue. We try to provide such a dialogue in both an informed and timely manner. This week, we’re taking a bit of a detour from the usual Stray Shots because it appears a member of America’s law enforcement community might get away with killing another young, unarmed person of color. And so the usual cycle we’ve witnessed with Sean Bell, Amadou Diallo, Oscar Grant, Trayvon Martin (killed by a civilian under the same premise), John Crawford, Eric Garner, Ezell Ford, and countless others is playing itself out. This is way beyond the scope of Hip Hop, but there’s also a direct correlation if you’re a fan of Hip Hop. So what do we do before the cycle of what appear to be innocent people getting shot by law enforcement officials with no repercussions repeats itself in the form of t-shirts, protests/candlelight vigils and the inevitable “(insert victim’s name here) freestyle?”

It’s complicated, right? These virtual spaces that we frequent have the power to make real change only when it spills over into the actual world. No one deserves to die because a police officer—allegedly—got upset that two brown people treated him like an equal and told him they were going to be at their destination soon. And the only way to impact that is real-life activism.

Omar: I agree. A few days before our country’s own citizens were getting gassed and shot with rubber bullets, we started asking artists about Michael Brown, who was the latest victim in a long line of young, unarmed people of color to die during what seemed like a normal run in with the police.

“I think it’s unacceptable,” Lecrae offered, in an interview with Emily Berkey that DX has yet to publish. “I think the government was created to serve the people, not to run the people. I think we’ve forgotten that the government works for us. They’re not in charge of us, we’re in charge of them and I think we’ve forgotten that. Some of us are under educated and we don’t know that. They work for us, we vote them in, we put them in their position, we create these laws, rules, and legislations and we have the power. I think we’ve forgotten that, it’s that slave mentality of, ‘Yes, sir. You win. You rule.’ Because of that authority we’ve given over, we’ve been taken advantage of. I don’t think that calls for street justice, I think it just calls for us asking for what already belongs to us. We’re law-abiding citizens.”

Andre: It proves there isn’t such a thing as a “normal” run in with police for people of color and police. And this is where Rap and/or Hip Hop comes in. African-Americans have always been outsiders in America. Hip Hop has been, in part, the voice that pushes back. It’s so interesting that, after the African-American civil rights era, we’ve come far enough to think of ourselves as ‘insiders.’ While there are no words to describe how people fought and died so we could participate in the democratic process, we are not necessarily (if you let history tell it) ‘of’ the democratic process, and these incidences serve as a reminder of the class of citizenship still occupied by black folks. Still, theoretically, he’s right, right? But it doesn’t feel like it. Remember when Kanye did this:

Tell me it doesn’t feel this way right now?

Omar: Ah, yes. I remember that moment very well. The thing is, as much as the police and other sectors of our government make me feel like they give less than three-fifths of a fuck about me as a black man, this isn’t limited to a black issue. At its best, we assume Hip Hop speaks for oppressed, marginalized members of society, but that’s only one of its many functions. And I think it’s serving in that function to a much lesser degree for a variety of reasons. This is a societal illness. To Lecrae’s point, when the adults we pay to protect us are killing teenagers, we have a serious problem. Education is definitely one key factor. I’d prefer if people research all the details of each case before blindly hitting Instagram, Twitter and Facebook with knee-jerk reactions. I’m fairly well-versed in some of California’s laws, and I still get visibly shook when a policeman follows my car for a couple blocks, because I feel I can still be beaten, killed or wrongfully cited even if I know my rights. The latter has happened to me before. And when you’re sitting there on the curb or in your car dealing with a mix of rage and remnants of fear, you realize just how powerless you can sometimes be. I think the solution starts with education and political mobilization. Where does Hip Hop fit into that equation? We asked Crooked I Wednesday, August 13.

“I’ve seen it,” Crooked explained. “Back when they were doing “We’re All In The Same Gang,” I was a baby. My bigger brothers was all gangbanging [along with] with my uncles, cousins, and all that. They were with that movement, like, ‘You know what? This is some shit that needs to change.’

“Hip Hop sparked that. With “Self Destruction,” Kris did that. Now, what can you do when the top men is only talking about twerking? Motherfuckers don’t really have it in their mind, and they don’t care about Michael Brown until it’s them. It can be you. We really need to organize and do something about that. I wish Russell was out there. When Russell [Simmons] was out there doing the Hip Hop Summit, I did about two of those. I was there. I’m not gonna say any names, but he was approaching rappers to speak on certain things on a panel, and they were like, ‘Nah, I’m not doing that, dog. I don’t get into politics or community stuff.’

“These were certain rappers that niggas respect and love right now. I’ve seen with my own eyes how everybody’s not willing to take action.”

Andre: Rappers can’t make certain decisions because they’re severely limited by structures they have fealty to. This is what it is to be an adult—for the most of us, at least. You’ve got a series of obligations that often conflict and tangle you in ways you had no idea you’d have to encounter. That said, people often think there are probably obligations to a sense of justice that overcomes those other obligations. I don’t know which one is correct. It’s really, really unfair for me to go tell someone to risk their career making comments that could alienate a certain segment of their fanbase. But being a POC has a kind of asterisk against it for that reason. It precludes a certain set of responsibilities separate from pure personal survival. It’s the idea that I’m not safe until we all are. So while I can’t think of Hip Hop consistently leading to political change, there’s no doubt that it’s an important tool in the arsenal. That’s what makes Kanye’s previous actions against old George so powerful, and that’s why probably only he can be a megastar and make a song called “Blood On The Leaves.” So while the desire to make these people we look up to because of their prodigious musical talents into ambassadors for social change is great, it hasn’t really been done right since It Takes A Nation of Millions To Hold Us Back, and that was some 26 years ago.

Omar: Some people will look to so-called conscious or militant emcees to articulate what we’re feeling because they have before. And there’s some merit in that. I’m not ashamed to admit I learned who Oliver North was because of listening to “Black Steel In The Hour Of Chaos.” But I also found out who Yusef Hawkins was by listening to Chubb Rock. I never paid attention to who C. Delores Tucker was until Tupac began dissing her. So I guess I’m saying these kind of events will let you know what side your favorite emcees stand on merely by their actions or lack thereof. And when the police are firing tear gas on media outlets and allegedly drawing weapons on credentialed reporters, you might not have the option of being picky about the source of the commentary. Those are moments when Hip Hop can be such a powerful tool. But much like school or church, Hip Hop can only provide so much, and the rest is up to us as individuals and members in our respective communities. I hope people are taking badge numbers, learning specific laws about how to assemble, stage peaceful protests and staying angry through midterm elections.