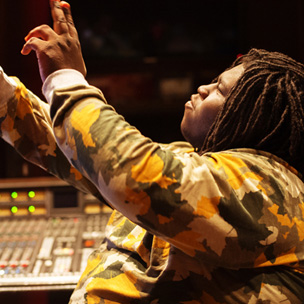 Young Chop Says, "I Don't Even Know What Drill Music Is"

The city of Chicago has a rich musical history. The third largest city in America has produced some of popular music’s most original musicians. From Muddy Waters, Herbie Hancock, and Curtis Mayfield, to R. Kelly, Twista, and Kanye West, Chicagoans have left an indelible mark on the music business. These artists crafted songs that painted a picture of joy and pain that comes from living in Chi-Town’s inner city.

Chicago also has a long history of gang violence dating back to the turn of the Twentieth Century and the Chicago Outfit. The middle of the century saw black street gangs form that still exist today. An infusion of guns and drugs coupled with single-parent households and an inferior school system has made the west and south sides of the city a virtual war zone and Chicago the murder capital of America.

Emerging from the creativity of its musical fathers and the chaos of the current streets is a movement of young Rap artists that rhyme about the violence that they see. Coined the “Drill” scene, these young men and women have found homes in Hip Hop. While they may rap about the streets, for many of these emcees the street life is a thing of the past.

The soundtrack to Chicago’s burgeoning Rap scene is provided by Tyree Pittman, aka, Young Chop. Chop’s cinematic synths and booming 808s are the backdrop to songs from artists like Chief Keef, Lil Bibby, King L, Lil Durk, and Lil Reese. Young Chop is to Chicago’s Drill scene what Dr. Dre was to G-Funk in the early ‘90s, and his movement is expanding.

Young Chop Explains His Reluctant Rapping Debut, “All I Got”

HipHopDX: What inspired the new single “All I Got?”

Young Chop: [Laughs] That’s crazy for you to come off and say that. My deejay, DJ Victoriouz inspired me to do it. He was like, “Do a song or something,” so I started recording. I picked a beat—one of my producers did the beat, and I recorded the song.

DX: Why’d you decide to try your hand at rapping?

Young Chop: Just to see how it feels when you’re a rapper. I’m a producer, so it’s different fan bases for that. I just tried it, and they like it though. I don’t know why. I feel like it’s weak.

Young Chop: Because I’m not a rapper. I ain’t choose to be no rapper. It ain’t for me.

DX: Are you going to keep doing it?

Young Chop: We shall see. I might. You never know.

DX: How’d you get into production?

Young Chop: I got into production a long time ago. I was always into music anyway. I always liked the beats and shit. I was like 11-years-old, and I told my cousin I wanted to make beats. He said, “It’s this program me and my friends be using.” He downloaded it on my computer—it was FL Studio [formerly named Fruity Loops]. I think I had the demo version at first. He showed me the little basics of it, and then I started learning myself after that.

DX: There was a time when people used to look down on producers that use FL Studio and now a lot of major cats are using it.

Young Chop: Aw yeah, most definitely after the hits started being made on it.

DX: Where did you initially get your drums?

Young Chop: A sound kit off of the Internet.

DX: Did you play an instrument when you were younger?

Young Chop: Naw, never. I never played an instrument, none of that. I just always had an ear for it, period. I was just playing with it every day until I learned keys and all that…what went right with each other, different sounds and stuff. That’s about it. That’s how it came about.

DX: Where’d the “Young Chop on the beat” signature come from?

Young Chop: My little cousin said it, and I recorded him.

DX: How’d the Puff and Meek Mill single “I Want the Love” come about?

Young Chop: Really it’s actually funny though. I gave the beat to French Montana a minute ago. I told him to try something different with it, and he so happened to give it to Meek Mill. Puff took it from Meek, and the rest is history after that.

DX: How does it feel to work with New York cats being a Chicago guy?

Young Chop: Not basically as far as New York people. I did stuff with a lot of Down South people, too. As far as working with people period, it’s actually fun though to see what people do in the studio with ‘em.

DX: When Kanye originally dropped the remix to “Don’t Like” you had an issue with it, and then you ended up working on Yeezus. How’d that transition happen and what was it like working with Kanye?

Young Chop: He reached out to me, flew me out to Paris and the rest is history after that. With the [“Don’t Like”] remix, I hated that shit at first; I ain’t gonna lie. But you know you gotta go through stuff just to win. They didn’t confirm it with me first. I owned everything—the whole song, I owned it. Keef wasn’t a signed artist then, so it was my song basically. I told them, “Before y’all even drop it, can I hear it?” and they just dropped it anyway.

DX: But you ended up liking it in the end?

Young Chop: It’s cool. I don’t hate it. I’ve moved on from that.

DX: What’s your relationship like with Chief Keef right now?

Young Chop: That’s my brother. Always will be my brother. That’s how it is. What you hear different?

DX: Nah, I haven’t heard anything. It just seemed like you were doing your thing and he was kind of doing his own thing for a minute.

Young Chop: Yeah, you got to. You gotta do that one time. You can’t just be stuck with one person for a long period of time like that. That’s what people expect you to be focused on. I’m a signed producer, so I have to venture off and do different things. He’s a signed artist and he gotta work with different producers, so it’s the same way. That’s how it works. We can’t just be labeled as one thing where I just work with him and nobody else.

DX: What do you say to the critics that think Drill music contributes to the violence we see in Chicago?

Young Chop: I don’t even know what Drill music is, but whatever they think it is we just telling the truth. Everything that’s in the raps is the truth of what’s going on in the streets of Chicago right now. Whatever they portray it is, that’s what it is to them. I can’t change nobody way of thinking.

DX: When are we going to hear the follow-up to Precious?

DX: You signed an artist named Johnny May Cash. How did you find him?

DX: Did you always know he was talented?

Young Chop: Aw, most definitely. We come from the same womb, so we all came out like this. I’m trying to keep him different from everybody else a little bit.

DX: What’s coming up for Young Chop and Chop Squad?