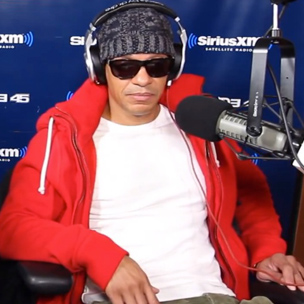 Talk about a comeback. Peter Gunz gained national attention alongside Lord Tariq in the late ‘90s with “Déjà Vu (Uptown Baby),”—an ode to his hometown, the Bronx, New York. While he’s collaborated with artists like Big Pun, Fat Joe, Mariah Carey and KRS-One, he hasn’t been a household name in over a decade. Nowadays, the platinum-selling artist is busy juggling a wife (and a wifey), dishing drama on VH1’s “Love & Hip New York,” and managing the careers of Amina (the wife, not wifey), Jibreel and his son, Cory Gunz.

While he’s discovered newfound relevance within the realm of Hip Hop, he’s not necessarily trying to find his way back to the top of the charts in 2013. And he’s fine with that.

“I know I can stand toe to toe with some of hottest dudes out, but not I’m not out here for that,” the elder Gunz said, during a stop at Cipha Sounds’ “Take It Personal” Improv showcase. “I would make music if there was nothing involved. It’s a hobby. I write rhymes, I make music, and I’m a musician. I play guitar, keys. I was a musician before Hip Hop.”

HipHopDX caught up with the Grammy-nominated and trained musician to discuss the state of New York Hip Hop, Cory’s career and what’s next for him. Uptown Baby!

HipHopDX: So what’s going on with Cory?

Peter Gunz: Cory’s signed to Young Money, but he got caught with a firearm in the Bronx. He was facing a three to nine [year sentence], but the judge came down to a two-and-a half [years]. It was Cory’s first offense. He’s never been in trouble, so I was trying to get them to move that off the table. But you know, when you’re a rapper, black and… They’re just hard on guns in the city. So, Young Money put up a lot of money, we fought and I kept Cory quiet. He didn’t put out a lot of music. We smoldered him. When you making noise and you’re popping, that’s when they make an example of you. So we either had to keep him hot and he got his ass in jail or cool him off and try to get him hot again. But now that he’s got probation, he’s out in Miami trying to work on records and get himself up again.

HipHopDX: How did he feel about you on “Love & Hip Hop?”

Peter Gunz: He wasn’t really happy, and he didn’t know about all my shenanigans. Cory’s a junior so it affects him. What I do affects him. I’ve seen him arguing with people on Twitter, Instagram, the blogs and stuff. I was like, “Man, let ‘em talk.”

HipHopDX: Where do you see him going?

Peter Gunz: Cory’s just a lyricist, and he won’t bend. If he went in the studio and did a “1,2,3, ABC / I’m down with Young Money,” who fucking knows? He’d probably be a star by now. But he won’t bend from being a lyricist. We have to hope that people go back to wanting to hear from spitters, and not need to hear a hot, finger snap record. Cory’s sticking to his guns—no pun intended—and trying to be a lyricist. He deserves it. He’s been doing this for a long time. He’s in my top five favorite lyricists and not just because he’s my son. He can stand next to the best of them. I’m going to die trying to make sure he gets his shot.

HipHopDX: What do you feel about state of New York Rap?

Peter Gunz: New York rappers got to stop crying. My mom use to say, “That rapping and stuff you all doing now is not do-wop,” but now we sound like them. Ah, the stuff they’re doing is not good. Go recreate, reinvent. Don’t try and bring the ‘90s back. Try to find a new sound. Try something new.

HipHopDX: What about you?

Peter Gunz: I have a few things to say. I have a few things left in the tank that I’m going to release. The difference between me and the average rapper is that if you like it, you like it and if you don’t, you don’t. I know I can stand toe-to-toe with some of hottest dudes out, but not I’m not out here for that. I would make music if there was nothing involved. It’s a hobby. I write rhymes, I make music, and I’m a musician. I play guitar, keys. I was a musician before Hip Hop.