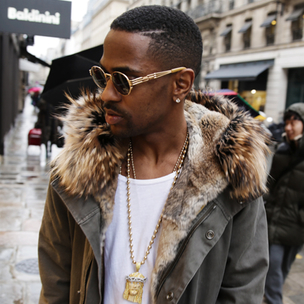 Big Sean is on stage running through a gaggle of hit records, performing in front of a packed warehouse somewhere near downtown Los Angeles, California. He’s headlining the second leg of adidas’ string of “secret” pop-up concerts in promotion of the sneaker and apparel company’s “Unite Originals” campaign. Hundreds, maybe a thousand fans are exclaiming, “Ass! Ass! Ass! Ass! Ass! Ass!” in rhythm to his raucous smash “Dance (A$$),” while the Detroit-emcee bounces up and down along the catwalk extending into the audience. Even the socialites sipping complimentary white wine in the posh VIP section aren’t immune to his tune. Two weeks ago, MTV named him the 6th “hottest” emcee in Hip Hop—one spot ahead of his G.O.O.D. Music label head honcho, Kanye West. Two songs ago, his black T-shirt vacated stage back. Everyone’s partying. No part of this scene screams promotional event.

Someone must have forgotten to tell Big Sean that rappers don’t go all-in for corporate sponsored concerts.

“It feels like it’s been a long time coming, but it ain’t been a long time, man,” Sean tells HipHopDX exclusively following his set, visibly drained from his performance. He’s under the weather, but still took time to greet friends and fans in and outside of his artist trailer located behind the cavernous venue. His handlers do their best to manage the fawning masses. After all, Big Sean sits on the cusp of superstardom now. And superstars aren’t required to do press or politick with real people anymore. A meager “Like” or “ReTweet” is enough to meet social expectations. Personalization is the currency of the Internet-era, even if it doesn’t include actual personal interaction.

But Sean seems eager to overextend himself. He flashes a fatigued smile while talking to what appears to be a group of friends of a friend. He takes a watery-eyed soon-to-be Instagram pic with a separate pack of teenagers and even invites this publication into his trailer for a twenty-two minute sit-down conversation—family and confidants all around—while he figures out how to cut his Adidas Shell-Toe-shaped birthday cake since his born day is four days away.

It’s an unexpected scenario. Someone must have forgotten to tell Big Sean that superstars don’t do press anymore.

Maybe he flexes his humanity so earnestly because, despite the success of his 2011 release, Finally Famous, and all the accolades that arrived soon after, there’s a part of him that doesn’t quite feel finally famous. Coming from Detroit—a city so muddied in economic disorder that Michigan Governor Rick Snyder appointed Kevyn Orr as Emergency City Manager, charged with restoring balance to the budget—maybe it’s difficult to party when the home front is rapt in plight.

“It sucks that the D is in such crazy economic turmoil right now,” he says. “I was in Berlin looking at the news and in Berlin, they was like, talking about Detroit. It was crazy!”

He continues: “That was heartbreaking because I had looked at it right before I had to go on stage and that shit is just depressing. That’s where my whole family is and that’s where I’m from and where we all live. It’s just fucked up to see. It sucks because I was sitting with my grandma, talking to her and she was there when [times were better]. She ended up there with her family because of how banging the economy was and how booming it was, how many jobs there was, how promising it was. She’s still alive. Think about seeing it go from there to here all in the same lifetime. That’s crazy as fuck, but I feel like everything that hits the bottom, you can’t go nowhere else when you hit the bottom. It’s gonna bounce back.

“I did a show in Detroit at the Palace of Auburn Hills, even though how fucked up it is, it showed me how the city can come out and support each other because that shit was packed. It was like 15,00 to 20,000 people or however many. It showed me that no matter how fucked up it is or how bad economically things are, people can come together for a certain event. When you can come together and show each other love, that’s when you can bounce back for sure.”

Maybe Big Sean is leading by example, laying the subtle principles of a would be empire. His November 2012 feature in GQ signaled his fashion industry aspirations three months before the launch of his clothing line, Finally Famous in February 2013. There’s more. Key Wane—the G.O.O.D. Music artist’s longtime friend and collaborator, who has garnered his own notoriety after producing Meek Mill’s infectious single, “Amen” as well as Sean’s “Guap”—is the first of what looks to be several acts he plans to usher into the industry. “It’s just the beginning,” Sean says of Key Wane’s success. “I’ve got people I’ma put on like artists and producers. Just being a businessman. It’s a business. That’s what it is.”

Or maybe Big Sean is merely in the middle of the ride he’s worked for his entire life. Maybe after, as he describes, sitting in his momma’s house “wishing and praying” to make a mark in Hip Hop, he’s simply happy to be in a position where his raps clock revenue and can’t help but spread love. Arguably, Finally Famous was more critically and commercially successful than predicted, raising expectations for his 2013 release, Hall Of Fame.

Someone must have shown Big Sean how to embody audacity and humility all at once.