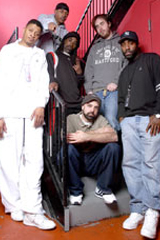 One listen to J5’s Power In Numbers and you understand why the Earthquake State is rocking. Hot like fever and funky like stank, their latest represents the grit and grime of the underground while sweetly embracing the overground. As Nu-Mark boasts, “We have one of best, if not the best records out this year.” Don’t sleep. Flashes of Pharcyde, Public Enemy and De La Soul collide with streaks of Common, Q-Tip and Shock-G. Take a trip down their track listing.

1. This Is
“Sound-wise and production-wise the new record is a bigger record. We caught up on a lot of things that we needed to do better. Put more bass in it. It’s more mature and focused. We recorded a lot of it at Nu-Mark’s studio. It was a more friendly, relaxed environment. That’s why we got the quality of work that we got out of this record.”–Marc 7 “We wanted to make a more dynamic record, more hills and valleys, different tempos, different topics. Everybody revealed more of who they are. I really honed in on what I wanted to do and captured the feel that I wanted for the group. 90% of the album was recorded at my house. There was a positive vibe in studio. We could take a break, chill out, rag on each other, goof off and go back to it with a fresh slate ever time. We didn’t have to worry about an hourly studio rate. Worrying about business in the studio, it doesn’t mix. Your mind needs to be clear and thinking on that level only.”–Nu-Mark

2. Freedom
“We’re going to Europe in March and Tokyo in a month. Touring opens you up as a musician, as a producer. You come to grips with how universal your sound is. We’ve augmented our sound because of our travels.”–Nu-Mark “It’s about being inventive. Not trying to give people the okey doke. Quality Control. Controlling your shit.”–Marc 7

3. If You Only Knew
“LA is one of most creative hip-hop cities on planet.”–Marc 7 “Every journalist in the world is sleeping on DJ Premier. He should be on the covers of The Source, Vibe, anything that can pimp the word hip-hop.”–Nu-Mark

4. Break
“J5 has always ignored people. Our life long motto is ‘Do what’s right for us at the right time.’ In ’96, we put out our EP independently and went Gold. Then when we signed to Interscope, people said independent is the way, it’s hip, you’re selling out. We paved the way for our own careers.”–Nu-Mark “Our lives are not too much different now that we’re on Interscope. Right when we put out our EP, we blew up. In Europe, we were in the Top 40 and so we saw that type of lifestyle at an early time in our career. That tutored us on the game early.”–Marc 7

5. React
“People just want regular old beans and rice. They adore listening to music that degrades women and violent shit. I don’t feel people want a change. They’re comfortable in their zone. This year, I didn’t listen to one album without fast forwarding.”–Nu-Mark “It’s wack that I can be on the West Coast and hear songs from East, South and Midwest but when I go to NY I don’t hear the same. I hear everything but West Coast wherever I go.”–Marc 7

6. A Day At The Races
Posse cut with Big Daddy Kane and Percy P. No hook, just rhymes. Both J5 members rank it a favorite. ‘Nuff said.

8. What’s Golden
“Radio love is hard to get. We have a hard time getting airplay in our own backyard. KROQ gave us more love than a lot of these stations. How are you not going to support a group with a story like ours? It’s not like we’re coming with wack shit. You can’t tell me you can’t play ‘What’s Golden.'”–Marc 7 “As a collective, we filled in the empty holes on Power In Numbers. We hadn’t talked about raw issues, hadn’t had a beat that sounded like “What’s Golden” with a real rugged feel to it. It’s definitely part of who we were. We just never got around to it on Quality Control.”–Nu-Mark

10. After School Special
Mastercard and J5 are promoting a writing contest. The kid who can write the best essay will win an internship working at Interscope Records.

12. Sum Of Us
“What glues us together is our knowledge of old school hip-hop. When I first met Soup, he’d quote some of the rarest 12 inches that most emcees I’d talked to definitely did not know. It sounded like a conversation between 2 DJs. They all acted like DJs. DJs buy everything humanly possible. We’re all encyclopedias of hip-hop and have a deep appreciation for the creative art of hip-hop.”–Nu-Mark “Being honest with each other. The ego thing is not relevant. It gets squashed quickly. We take criticism well and are open to try new things. We strive to do something different with our shows and music. That’s how we get down.”–Marc 7

14. One Of Them
Featuring and produced by JuJu of The Beatnuts. (Yeah, he’s still mad ’cause J.Lo jacked his beat.)

15. Hey
“At the end of the day, you’re going to have to look at your body of work for a long time and live with it. We have no problem with that. I think we’re deserving of Platinum status. We would prove that a group doing what they’ve done from the beginning, not bending to what’s going on and what’s popular, can go Platinum. It would say to labels that this type of music does sell.”–Marc 7 “I’d like J5 to be steady. I’d like us to model ourselves after Gang Starr. They stay consistent in the community but are still innovative and still give you the heat that you want.”–Nu-Mark

16. I Am Somebody
“I’m doing an instrumental beat project titled Blend Crafters. It’s a six-song EP.”–Nu-Mark “I want to do a solo record. We could pull a Wu-Tang. It’d help build J5 up bigger. Jurassic 5 comes first. But as an artist, there are things I want to get off my chest that I can’t say with Jurassic 5. What I’m about and what I’ve been through I can’t really explain through J5.”–Marc 7

17. Acetate Prophets
“Cut and I worked hard and this song came out a lot better than I thought. It’s one of my favorites.”–Nu-Mark “Check out Jurassic5.com.”–Marc 7