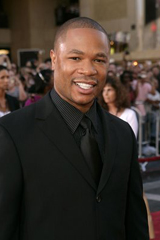 Xzibit: The Hunger For More

Few artists as lyrically capable as Xzibit have made it to household status. Although Pimp My Ride, acting and Sprite endorsements may have led to Alvin Joiner becoming a celebrity to older generations and non-Hip Hop listeners, Mr. X-to-the-Z‘s formula for rhymes, not cars is “putting paint where there ain’t.”

A relatively quiet first half of 2009 has found Xzibit touring throughout Europe. The California-based emcee credits Germany with giving him first plaque 13 years ago, and the Likwit Crew standout used the opportunity, touring with Tash and brethren, to remind everybody – including perhaps himself, that he’s still emersed in the culture that built him.

In a brief but powerful discussion with HipHopDX, Xzibit explains why he’s plotting a return to the Rap of his roots. After the longest delay in his career between albums, read how reaching the fans has touched the rapper’s heart and his hunger for more.

HipHopDX: You premiered your Euro > Dollar webisodes with HipHopDX. Let’s start there: what made you want to focus on the European market so much in 2009?
Xzibit: Man, I’ve been going over there since ’96. My first gold record came from Germany. So, you know, I’ve got a lot of love for the European audience, period. On top of that, if you’re not interested in being a worldwide artist…in 2009, it’s important. Everything is regional, everything is shutting down. It’s just to have the regular audience that I’m used to, I have to go worldwide.

DX: Right. As an artist, you’ve had such a dynamic career that’s evolved in so many different ways. I’m curious to know, when you’re over there, in that world, how does it shape your role as an artist differently? Or how you look at your career?
Xzibit: Being overseas? I think overseas, they’re really into the hop. I don’t think they really [care about the same media and celebrity-driven stuff that we are] into over here, domestically. They’re really interested in people that really love the music, and love the hop. That’s the essence of what Hip Hop represents and what it is and how it’s created. They really love the effort that I put into my music. That’s different.

[On the other hand], you can try it all day, but if you’re connected to the people here or get the pecking order, or get the nod from this person, then it really doesn’t register with the audience [in the United States], which is kind of weird.

DX: That was my next question too. In the east coast, especially in New York, I know an artist like a Jadakiss or say a Cam’ron might have to walk down the street and hear everybody’s feedback, whether good or bad. Artists are also getting this now on Twitter. Over there, is the relationship between fan and artist different?
Xzibit: I’m not listenin’ to nobody that ain’t sold more records than me, first of all. [Laughs] So if you ain’t sold no mothafuckin’ records, then your opinion is like an asshole – everybody got one. So fuck that! So [to use your example], Jadakiss [click to read] shouldn’t pay no mind to nobody walkin’ down the mothafuckin’ street anyway. His response should be, “Hurry up, you’re gonna be late for work.” [Laughs] “Nigga, if you ain’t sold more records than me, then shut the fuck up! Have a healthy, hot, smoking cup of shut-the-fuck-up!“

DX: Tell me how the Euro > Dollar videos came to be.
Xzibit: I’ve been recording my road trips since a long time ago. That’s what’s the Restless Xposed DVD came from. That was an idea I had long ago, before there was even the possibility of putting it up on the web. I think that people just want that extra experience. If you care enough to tune in and download, then you may as well have more things to actually participate in. That was the whole idea. It’s a natural fit. As long as it’s appropiate to put up, and it represents the goal and the task at hand, then we’ll put it up there.

DX: It’s so interesting to me that you’re executive producing Awol One’s Owl Hours. Everybody knows that you’re a veteran of the Los Angeles Hip Hop underground. But tell me how you got done with this project, because it certainly caught me unexpectedly.
Xzibit: Dude, I’ve known Awol One since before I think I even met Tha Alkaholiks [click to read]. Awol used to come and pick me up in his yellow Datsun pick-up truck. I didn’t have a car at the time. He would come and pick me up from Whittier, which is where he lived, and I was livin’ in Hollywood at the time. He would come pick me up and we would just drive around, smoke, and freestyle to tapes and play each other music. That’s what I came from. I can’t never front on Awol One, ever!

We just stayed in contact. He came and played me his music, and we caught up on a bunch of business. My man was like, “Yo, I’m [still] doing this music.” It was just a natural fit. It’s cool. I like what he does. It’s a different take on the music that I love, and I’ve known dude for so long. It don’t gotta be my shit for me to appreciate it.

DX: I’m glad you mentioned freestyling. Your Cali Kings freestyle eventually became components of your “3 Card Molly” verse. Your Rhyme & Reason freestyles were something else. Over a decade later, at the gym, in the shower, what’s your relationship with freestyling?
Xzibit: It’s essential to live stage shows. It’s essential to being able to create in the studio. It’s like a starting-point. It’s like a position you learn before you take off in a sprint in a 100-yard dash. Before you run the race, you’d better learn this form. And you better be good at it, because this is gonna launch off everything and dictate how the rest of the race is gonna go.

DX: You’re one of the few artists who has been outstanding in freestyles, and never weighed down on an album. You defy that curse.
Xzibit: It’s good, man. I appreciate that. I used this European tour…I’ve been two years away from music. I needed to go, and just [perform overseas]. I’m not gonna just drop an album and try to do every kind of angle just to get money off of it. I really appreciate my fans, I really appreciate the expansion of my fan-base and everything that I’m allowed to do – between music, film and television. Now it’s just, now…I just make it work for me. I go out and I tour and I let them know that I’m comin’, and that I’m here. They’re worth the time and energy to get to ’em, and to show ’em that. Am I getting paid for doing all the shit that I been doing? Fuck no! [Laughs] This is about me making [the art] look like somethin’, like going and actually appreciating what I have with my fans and then goin’ out there and makin’ it happen. Is it better to be chillin’ on air-conditioned movie sets? Fuck, dude, everybody would love that. That just shows you, no matter what, if I can go there, I still ain’t forgot where I come from. Let’s go grind it out! We just finished grinding it out, man. If you think we’re traveling first class and luxury cars across Europe, you’re trippin’! [Laughs] Grindin’! That’s the hop. That’s what it’s about.

DX: There’s very few artists in Hip Hop that have worked with some of the names you have. From Dr. Dre and Sir Jinx to Diamond D and Erick Sermon. Last week, I was speaking to Jesse West, who was telling me about you guys creating “What You See Is What You Get” too. Tell me about where this ear and appreciation for producers comes from…
Xzibit: It’s universal, man. It’s not regional for me. I will go where the energy is at. I listen to a track, and if the energy is right, it don’t have to have a brand name on it. It don’t have to be, “Oh, but he’s not in the top five right now in Billboard.” Who gives a fuck! Let’s make some music that I’m moved by. If it moves me, then…shit. If you’re a fan, then it’s gonna move you too. There it is.

DX: Last question. You said it yourself, it’s been two years since Xzibit made an album. You’ve always dropped every two years like clockwork. What are you working on right now?
Xzibit: Yeah. We’ve got a nice lil’ layout the way we want to roll [the album] out. We got three digital EPs that we want to put together, and kind of reintroduce the sound and the growth – instead of doing mixtapes, ’cause you can’t do mixtapes in the west coast; it just doesn’t work. [Laughs] So out here, we just gone’ roll it out like that. Plus, I can’t do what everybody else. I like to put paint where it ain’t, so I got a nice lil’ idea of how to reintroduce music on my terms. Instead of just runnin’ a rat race, I’m gonna reintroduce [Xzibit] in a very intellectual way, so you’ll see.