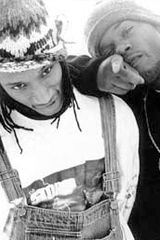 On the day in question, HMV was site hosting the event of Sound-Bombing III’s release. Some of the celebrities on hand were, producer Ayatollah, rapper R.A. the Rugged-Man and my guest that day, Brooknam family, Smiff ‘N’ Wesson, (Oh!! my bad people) Tek ‘N’ Steele!!?, better yet you can simply refer to them as The Cocoa Brovaz. Given this opportunity to find out more of what they have been up to and as if they were performing on stage, there was a constant passing the mic, completing the others thoughts. Steele leads off, “We are in here repping for the release of the Sound-Bombing III Compilation, we have a song on there, called “Spit Again“, Tek now interjects, “Yeah, if you pick up this album, you will get a taste of what we have been working on in last couple of months, the third Album.”

Rhythm: What was the controversy about, did you all finalize it, with the gun company?

Coca Brovaz: Politics. Just politics man! We cleared it just by shifting our position, but that may have hurt us. Because we always went by Cocoa Brovaz, that’s what we knew! See our fans were riding with the name Smiff “N” Wesson. They were not familiar with Coca Brovaz. Then we did not want to give any labels the name Tek ‘N’ Steele that was a last option.. because then nothing else would be sacred…We didn’t fight that fight with the Gun Company because that would be a large fight…but it’s all in the same.

Rhythm: What’s the joint on the album?

Cocoa Bs: Spit Again it features some great reggae artist Dawn Penn, Nyoka and Geraldine Nicholas …that’s the compilation, but on our single it’s Spit Again and Tools of the Trade. It’s giving back to the hood, fam and roots.

The current single, Spit Again, thrives off a series of mysterious guitar licks closely related to the Bob Marley’s sound, updated by the healthy dosage of drum arrangement, and made cohesive with the vocal hook by reggae vocalist, Dawn Penn, Nyoka and Geraldine Nicholas. then it’s all completed by the Cocoa Brovaz injection of lyrics, stating the need to simply Spit Again. On the other hand the b-side gives you, a vocal hum, filtered out to a bassline with over-layed soft guitars, that’s hidden beneath bass drums to keep it authentic. With a combination of spiked and dry snares, for musical arrangement, their vocals flow effortlessly, telling the street tales that about the clubs, women and places they have been and what they had to do, that’s Tools of the Trade

Rhythm: You got to tell people where Cocoa Brovaz are from?

Cocoa Bs: Well we from all over (with a little yard-man accent, I’m sorry!! West-Indian tone to it)…Bed-Stuy, Bushwick, Brownville, Flatbush…

They have been pushing nine almost ten solid years, since their first appearance, on Buck-Shot’s Blackmoon album on Nervous Records. Tek interjects “…that was our first professional appearance, that was about.. ’92-’93…We been together, see other groups break, up do solo joints, but we learned in High School, from our moms, pops to stay together, stressing PnC..”

Rhythm: Which label will Cocoa Bs run with on this venture?

Cocoa Bs: Well the current project we’re still dealing with Rawkus, Distributed by MCA…which is slated for October 15, 2002, but we have a Boot Camp album coming out on Down Duck, and then another BTU album (Buck-Town USA) we might be rockin’ on Duck-Down…We have three albums realistically that about to drop…it’s crazy baby!!, just trying, trying to get up in the cracks and crevices like roaches.

Rhythm: What other things are you all doing, which people need to know about?

Cocoa Bs: Right now we’re just doing BTU, Buck Town USA Entertainment it’s a place for rappers producers, writers, people with talent, where we can cultivate and groom what we have been doing in the game, but have something of our own, outside the record and management company. Such as putting on Mr.Yuk aka Dollar, Storm, Otis Robinson, Ms.West, a lot of things are going on. Check out www.duckdown.com to stay tune for the release of the BTU site.

As always I thank those that open the doors for me to get the interview, Shucky, and to you fellas you will always be known as Smiff n’ Wesson, you make good music this single and album will be well worth the anticiapation..U.W.A.G. and Rhythm damn sure delivers…