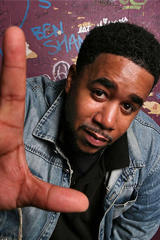 It’s almost peculiar that John Robinson is introducing himself so strongly this year. Six weeks in, the South Bronx native emcee already has two albums released and nationally distributed – Who Is This Man? and I Am Not For Sale, with plans for one or two more. The late ’90s Stretch & Bobbito/Fondle ‘Em Records alum has been recording singles and albums – with his group Scienz Of Life for over 13 years. He left New York a decade ago for Atlanta, and subsequently Los Angeles, and on a frigid Thursday afternoon, Robinson talks extensively back in his native city, in a crowded Manhattan cafe, about careers and paths coming full circle.

Before leaving to head to the same WKCR 89.9 FM signal that helped his career initially, John explains the jewels he learned from both MF DOOM and Company Flow on how to stay sharp artistically and commercially. Quick to pass credit to a list of friends and mentors, the Shaman Work Records President says he feels better than ever about his career, and says he’ll release these albums until he’s begged to stop. HipHopDX honors a true underground Hip Hop veteran, who’s sounding better than ever, and dropping science and albums like an artist of yesterday and today in one.