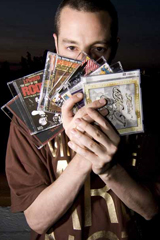 J. Period: Devoted To The Art Of Moving Tapes

In film, a montage is that collection of scenes that elapse time and advance plot, with often emotional results. In Hip Hop, that sounds a lot like a J. Period mixtape. For over five years, the California-turned-Brooklyn deejay has taken catalogs from Big Daddy Kane, Nas, The Roots, Lauryn Hill and others, and presented them in a “Best of” light that not only builds buzz, but celebrates these icons in a way the award shows and documentaries seem to miss.

Today, the deejay unveils a two-year-long effort with one of his personal favorite artists, Q-Tip. J explains why, four months after The Renaissance, The [Abstract] Best Volume 1 will help Tip, and why the Queens legend might be the best ever, and the method to the madness of a true mixtape master trying to make time-pieces and dollars in a challenging time. If the tapes come, the papes will come.

HipHopDX: You’re an hour out of the studio, as far as finishing this tape. Where are your thoughts right now, as far as where this stands in your catalog?

J. Period: That’s pretty much how it works! [Laughs] I’m just joking. I had a moment, while I was still at the studio, while I was still mastering it, where…yeah, I think that this shit is definitely the most intricate of any of the joints I have done. For the people that know the stuff that I do, that actually listen carefully, they know that that’s saying a lot. I also think that’s it’s the one that’s closest, with the exception of the Big Daddy Kane [click to read] [Best Of] that’s closest to me personally. Man, I’ve put so much time, energy and effort into this thing. I’ve had a couple of flashbacks to being in tenth grade, cutting my first period class to go to Tower Records to go pick up [A Tribe Called Quest‘s] Low End Theory at eight in the morning. I was so excited. Hopefully, I’m getting [to add] something to that story by contributing something, and it’s pretty incredible. I haven’t really soaked it up, and I probably won’t be able to until I’m really, really done with volume two. I’m pretty excited. There’s a lot of phases of makin’ one of these things, and the final phase is just making sure everything flows from start to finish for the casual listener. It’ll probably be a month before I go back and start listening for all the little tiny things I put in there.

DX: You said it right there and you’ve said it to me before, that Q-Tip and A Tribe Called Quest is among your favorite artists. You have the ear that a lot of A&R’s in this game don’t. That being said, with this tape, what direction did you try to bring in Tip?

J. Period: This really started about two years ago, when Tip [click to read] was originally going to release The Renaissance [click to read]. At that point in time, when we first started this process, it was about really showcasing the full spectrum of what he’s done. A lot of know Tip from Tribe [click to read] ; they don’t know know or realize all the production he’s done and the hand he’s hand in legendary artists like Nas and Mobb Deep [click to read]. He mixed almost the entire [second] Mobb Deep record [The Infamous], and produced about five songs on that album, which I didn’t even know, back when I was listening to that record.

So, for me, I think the direction of the mixtape is probably three things. Number one, it’s showing that there are legendary emcees and there are legendary producers, but I cannot, in my mind, think of any artist that is both. To capture Q-Tip, you’ve got to cover all bases. You’ve got to showcase the Tribe stuff, the emcee ability, the production abilities – that’s a start. The second thing is that when you go back to Tribe, it’s impossible – and I’ve interviewed Tribe, De La Soul, Busta Rhymes [click to read], Bob Power, Black Sheep, all for this mixtape, and it’s impossible to say who specifically did what, but everyone universally agrees that Tip was the record guy. He was the guy that brought the samples to the table. So the second thing I really was after was to dissect a lot of those classic records down to the original samples and sort of rebuild them. The third thing is, this shows how it all kind of is coming full circle. That doesn’t mean it’s going back to where it was, but it’s showing his new music in light of his old music. Let’s so I took “Breathe & Stop” [click to read] and I disassembled it – I took the drums, went back and got the Minnie Riperton sample that they used on “God Lives Through” [click to read], and then I got the bassline sample they used on “Butter” [click to read] and I basically rebuilt that track out of bits and pieces of different things Tip has done. It’s showing that at the end of the day, it’s all about the quality of the music. I’ve been thinking about this a lot, it’s probably the most narrative out of any of the joints that I’ve done, to tell a story. In the process of piecing that story together, I started thinking that Hip Hop is the only musical artform where it spits out its historical figures. It doesn’t pay respect, at least nowadays, as much as it should. The greatest Hip Hop, I think, is always built on bits and pieces of what came before it, and making references to other shit, whether it’s musical elements or scratch elements. So I tried to really stay true to that spirit.

DX: Amidst such a passion for the art, you’re a businessman and a marketer and a hustler. You have always helped artists sell albums. Tell me about the thinking in releasing this mixtape some months after The Renaissance being in stores…

J. Period: His album dropped November 4. The mixtape is dropping three months later. That’s for a couple reasons. Number one, strategically, the game has changed. Physical product, which took time to get out to people and be distributed, is sort of irrelevant at this point in time. It’s all about putting it in the right places online, and letting it spread in that way. For that reason, that changes the timing of how you release these things. Also, the scope of this, and the fact that I was pulling together so many different artists, it was a day-by-day process between Tip, Tip‘s manager and me about when we would drop it. All of us agreed that we wanted to have a strong impact. I felt like waiting until we had all the pieces of the puzzle was more important than putting it out and rushing it around the album time. If something is good, it can live online for