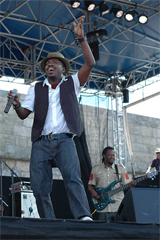 Classic soul has a few key components that make its sound one of a kind. The sound can’t be complete without poignant lyrics and sweet raspy voiced falsettos blending perfectly with an emotion filled track. If receiving six Grammy nominations is any sign that the art soul music making has been fully grasped, then it’s safe to say that Southern soul man Anthony Hamilton has a full understanding of the concept.

A brief career detour as a barber didn’t stop the Charlotte, North Carolina-based Hamilton from heading to New York and signing his first record deal at Uptown Records. The deal didn’t pan out, but soon he was on the road touring the world as a background singer on D’Angelo‘s Voodoo Tour. After making appearances on songs by Eve, Xzibit, and 2Pac, he was tapped to sing the hook on the Nappy Roots‘ hit “Po Folks” and garnered his first Grammy nomination.

Jermaine Dupri‘s So So Def came calling and a year later Hamilton dropped his platinum selling debut Coming From Where I’m From, sparking the hits “Charlene” and the stellar title cut. His gold-selling Ain’t Nobody Worryin’ delivered props to women of a larger stature with “Sista Big Bones” and showed his softer side with the touching “Can’t Let Go.” The standout “Do You Feel Me” from the American Gangster soundtrack cemented his place as the go to guy for classic soul sounds with a fresh twist.

His third studio release The Point of It All and its lead single “Cool” featuring David Banner showed Hamilton‘s funkier side and brought him back full circle combining his sound with Hip Hop. Still on the road with his Playin’ It Cool Tour, the man who admits he “likes to bounce” recently received his seventh Grammy nod for his duet with Al Green. Hamilton takes a break to talk with HipHopDX about making the new album, classic Hip Hop, and the beauty of Barack Obama.

HipHopDX: First let me congratulate you on your Grammy nomination. Where were you when you found out?
Anthony Hamilton: Thank you so much. I was on a tour bus. Layin’ in my bed, looking out the window. We were going through Texas at the time. That was a great feeling. I was rested up. I was ready for it this time. I was waiting on something to happen.

DX: You got nominated for best traditional R&B vocalist. What do you think describes your sound as traditional?
Anthony Hamilton: Well it reminds them of when it started. The guts and conviction people had in their vocals back when music was at its best. I think it reminds them of the beginnings of great music. Those voices like Al Green and Joe Cocker – people that made music that was so important.

DX: Many people don’t know you used to tour with D’Angelo back in the day. Back then, did you imagine you would be where you are now?
Anthony Hamilton: Humbly [sic] saying, yeah. knew I was going to be successful from a child. I just felt like I was different. I knew music was going to be what I do and have success. I just didn’t know when. God gives you these feelings and I never neglected those. That’s why, when my first record deals fell through, I felt like I could go through that. Knowing you are going to be successful doesn’t mean you are going to sell millions of copies or become an icon that people follow to the toilet. I am very successful because I make a living at what I love. It isn’t the most money or notoriety for me.

DX: With all the label change drama, things are still working out for you at So So Def. What makes it work for you as an artist?
Anthony Hamilton: I think the people around me. Being nice and cool to people allows success to happen. Success isn’t always in your hands. It’s in the hands of those that represent you and work on your project. Being true to who I am and good to people makes things work for me.

DX: Can you think of a song that made you say I want to make music like that?
Anthony Hamilton: Yeah I can. What’s that song by Elvis Presley? [Starts singing] “And I can’t help falling in love with you.” [The song is called] “Fools Rush In.” I used to really love that and Natalie Cole‘s “Our Love.” Stevie [Wonder]. Michael Jackson. I remember just laying on my bed and listening. It was like listening to stories.

DX: Your voice on “Do You Feel Me?” from the American Gangster soundtrack seemed to blend so perfectly for the era the movie reflected. How was it being asked to participate?
Anthony Hamilton: Amazing. It was a big movie. And for the song to be talked about as if it were going to be Oscar-nominated made it a great time. I feel like it was a great achievement not only for me, but my family got a chance to enjoy it too.

DX: I’ve been listening to The Point of It All all morning. You’re sounding kind of bouncy on this one. It sounds classic and fresh.
Anthony Hamilton: Yeah I had to put a different spin on it. I’m from down south. I like to bounce.

DX: So does your love for bouncing mean you grew up listening to Hip Hop?
Anthony Hamilton: Fat Boys, Run-DMC, Whodini [click to read], Beastie Boys.

DX: What was the first cut you remember hearing?
Anthony Hamilton: “Don’t push me cause I’m close to the edge,” [“The Message” by Grandmaster Flash & The Furious Five] [click to read]. [“The Breaks” by] Kurtis Blow. [click to read] “These are the brakes. Breakdown!”

DX: Could you break or pop?
Anthony Hamilton: I still do it. Don’t try me! I will moonwalk over there and spin flex on you right now, kid!

DX: What happened in your life between your last CD Ain’t Nobody Worrying and The Point of It All? It sounds much more personal.
Anthony Hamilton: Life brings about changes. Marriage. Kids. Gaining weight. Losing weight. [Laughs] Just natural progressions of life.

DX: You sound you are in love on this disc.
Anthony Hamilton: Yeah, I been in love from a child. In love with life. But I have great people in my life that I can love too.

DX: Who did you have in mind when you wrote “Point of It All”?
Anthony Hamilton: I had no idea I was going to write that song until I heard the music. Emotions and things started to take place and make you want to capture a moment. The music puts you in the mood about something you have probably been dealing with subconsciously. It tells a story. I was trying to get across a way to explain why I feel how I feel. The things I go through when I am away or when someone is away from you. All these things happen because of one thing-you are in love. Love makes you act retarded sometimes.

DX: A concept men and women can feel. Pretty smart songwriting.
Anthony Hamilton: Yeah that’s why I wrote it like that. I’m almost like a genius.

DX: Your wife sang background on “The News.” Did you have her voice in mind when you wrote it?
Anthony Hamilton: When I first started writing “The News,” I never finished it. The bridge and the outtro part weren’t done because I couldn’t hear where I wanted it to go at that time. When I got it all together in my mind, I kept hearing this part. I had to get in and record it right away. She wasn’t there the first time. But I just felt like her voice had that good-time kind of feel and her voice could bring that.

DX: “Prayin’ for You” made me think I was back up in the woods from the movie Deliverance or something. I think it was that foot stomp sound you have bumping on track..
Anthony Hamilton: Owwww. [Laughs] That foot stomp was fancy. I called myself “The Borrowed Boot Symphony.” I really had to borrow someone’s boot. This guy was at the studio and I had to borrow his boot to beat this wooden floor. I’m serious, woman.

DX: It’s probably hard for you to pick a favorite song on the disc, but what was the most challenging to record?
Anthony Hamilton: I think “She’s Gone” went through a lot of changes and transitions. Back and forth business wise, that probably got on my nerves.

DX: What’s going to happen in 2009 that will top 2008?
Anthony Hamilton: I think most of my taxes are paid. [Laughs] I think my record label, Misters Music, will be good. It will have artist and structure and I can employ some people.

DX: And what about Barack Obama as president? Do you believe it?
Anthony Hamilton: I wouldn’t have voted for him if I didn’t. I think he is going to do a great job. I’m going to do my best to represent. I think he represents a new brighter thinking America. It’s a beautiful thing. That’s what we need. He’s young enough to have adopted different ways of thinking. Once you get a certain age, you can lose touch with day to day realities. When you are young, you gotta get out there and hustle. He is fresh out the hustle. He feels fresh and new. And his wife is great too. That’s a real sista right there.