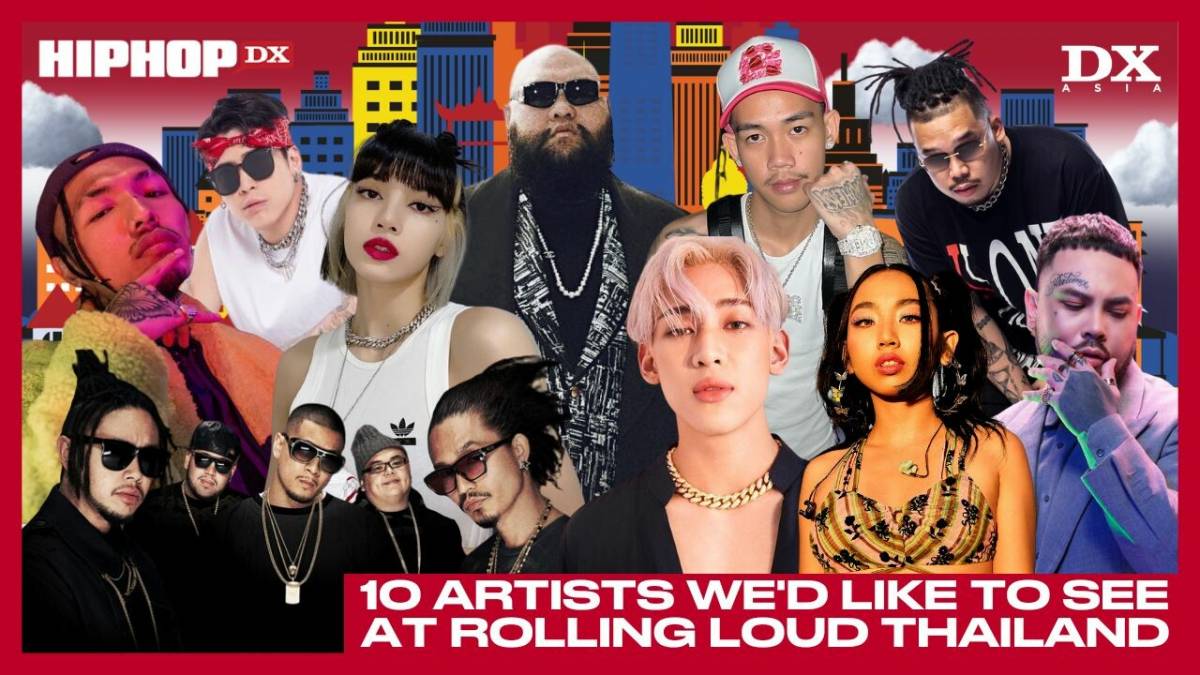 10 Artists We Want To See At Rolling Loud Thailand

Last July 26, Rolling Loud announced its expansion into Asia with a festival planned for Thailand in 2023. As one of the world’s largest hip hop festivals, this is huge news for artists and fans of hip hop in Asia. The Thailand edition is expected to incorporate elements of Songkran, or the Water Splashing Festival, one of the country’s largest cultural events.

While Rolling Loud Thailand would be a great way to showcase hip hop artists from all over Asia and establish our presence on the global stage, here are 10 artists from the host country who we hope to see bringing the fire and flavor of Asia to the world next year, ranging from big-name OGs to SoundCloud-made superstars.

Thai rap sensation MILLI has emerged as one of the country’s biggest and hottest stars this year. She went viral on TikTok for her track, “Mirror Mirror,” which features fellow Thai rapper F.HERO and Bangchan from Stray Kids.

She made her Coachella debut on the 88rising stage this year, where she went viral yet again for eating the iconic Thai dessert mango sticky rice during her performance. MILLI’s performances are undisputedly explosive and high-energy.

The Rolling Loud Thailand audience will be treated to MILLI’s high-speed flows, which will be accompanied by a posse of dancers who are sure to get any crowd going.

Thai-American rap group Thaitanium brings swagger to every live performance. They connect with the crowd in a way that makes everyone jump, dance, and rap along—something that the group encouraged in the early days of hip hop in Thailand when they noticed the crowds appeared hesitant.

As one of the pioneering hip hop acts in the country, they are no strangers to performing in festivals and concerts. Some of the group’s notable performances include the Asian Hip Hop Festival and the Thailand Hip Hop Festival.

Thaitanium first gained popularity in the 2000s and is still going strong today. Because of them, hip hop has since become one of the leading genres of music in Thailand. The group was previously named Artist Of The Year in Thailand at the 16th Mnet Asian Music Awards (MAMA).

Thaitanium’s catalog includes a mix of English and Thai lyrics, which will appeal to both local and non-Thai audiences attending the festival.

1MILL is one of Thailand’s most well-known and arguably biggest rappers. The young MC first got his start as part of Thailand’s underground Soundcloud rap scene and has since performed in front of thousands of fans.

His live performances have clearly reflected the energy and zeal of his music videos, the majority of which are viewed tens of millions of times. 1MILL’s track “Price Tag” landed on HipHopDX Asia’s “20 Best Songs of 2021” list.

The artist is a staple in Thailand’s arenas, festivals, and nightclubs. Watch any 1MILL concert video and you’ll see the crowd screaming adlibs and jumping along for this iconic rapper.

F.HERO is another pioneer of Thai hip hop, with a career spanning two decades in the scene. His influence on the genre locally is palpable, as evidenced by the establishment of his rap label HIGH CLOUD Entertainment and his appearance as a judge for the rap show, THE RAPPER 2.

Another seasoned performer in the industry, F.HERO has headlined bars, clubs, concerts, and festivals. His discography is perfect for the stage, and he knows how to get the crowd pumping their hands in the air. Not having one of Thailand’s most influential rappers would be a mistake.

Lisa’s live performances are built to the K-pop standard, with her commanding presence that makes her as one of the best live performers in the industry. She captivates the audience with her dance moves and numerous chart-topping hits that anyone can easily recognize.

The rapper, singer, dancer, and model recently made history by becoming the first K-pop solo artist to be nominated for an MTV Video Music Award (VMA).

YOUNGOHM is one of the country’s most prominent voices in the genre. The Thai rap superstar hasn’t shied away from writing and delivering thoughtful, razor-sharp bars about Thailand’s social issues.

A regular in Thailand’s gig and concert scene, he knows how to work a stage–no matter how big or small it is. He plays off the energy of the crowd well, even taking the time to run his hands across the front row. The rapper was recently featured on 88rising’s Double Happiness Global Digital Festival in February of this year.

The Thailand-born GOT7 member has regularly been releasing music as a soloist since 2021. Aside from being an established musician, BamBam is also highly successful restaurateur in his homeland, owning over 50 restaurants in the country.

The rapper is no stranger to performances on TV, online, and on the stage. His K-pop training shines in the way he’s still able to captivate the audience with impressive dance sequences and effective use of the stage.

BamBam also performed during the NBA halftime show earlier this year for the Golden State Warriors. He is also the first K-pop act to perform at an NBA halftime show. He recently collaborated with F.HERO and YOUNGOHM on the track “Skrrt.”

With numerous collaborations and features under his belt, URBOYTJ has become a fixture in the scene. He was nominated for the Artist of the Year and Album of the Year awards at Thailand’s Rap Is Now Awards last year. SELFMADE, his most recent album, has racked up hundreds of millions of views since its release in 2020.

Well-loved by the Thai audience, his fans scream his songs along with him in every live performance. URBOYTJ has mastered the art of knowing when to pause to let the crowd be part of the set, and this shows whether he’s performing in a bar or on the big stage.

FIIXD is one of many alums of THE RAPPER, Thailand’s popular hip hop-centric reality competition. With millions of listens on his Spotify, FIIXD is known for his energetic stage presence fit for a festival stage. He’s a star in playing off the energy of his co-performers and the crowd, not afraid to engage the audience when necessary.

POKMINDSET has worked on several projects with numerous Thai hip hop and R&B musicians. His song, “WIP WUP” featuring DABOYWAY and YOUNGGU went viral in 2019 and has since then gained over 300 million views on YouTube. His music videos feature all the parts of a mainstream rapper, such as flexing luxury items and being surrounded by women.

On the stage, POKMINDSET is a natural performer—not afraid to show off his dance moves to the beat. As a frequent collaborator on many hip hop tracks, he comfortably interacts with his co-performers to elevate the set.

While the final festival lineup and dates have yet to be announced, we’re excited to see how Rolling Loud Thailand will highlight both local and regional hip hop. Discover more Thai hip hop and R&B artists in our list of 10 Thai Hip Hop & R&B Acts To Check Out Right Now.