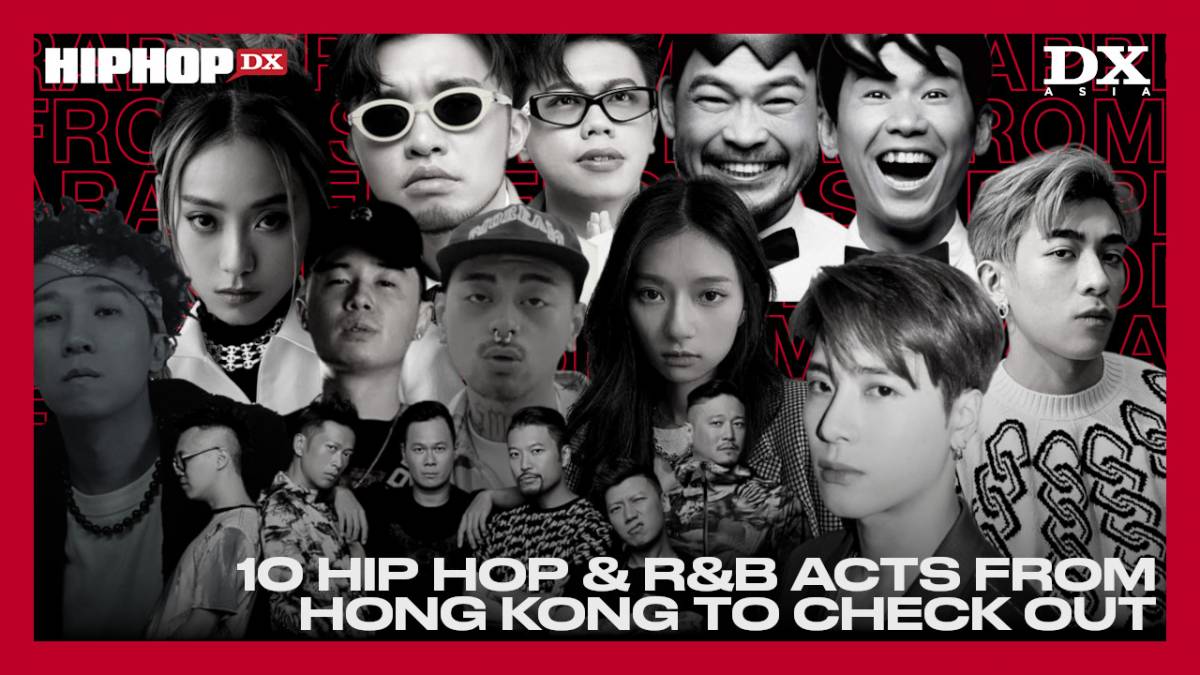 Hong Kong, which has a population of over seven million people and is primarily made up of residents aged 15 to 64, is home to one of the youngest and most diverse hip hop cultural communities, making it one of the thriving scenes in hip hop in Asia, alongside Nepal, Thailand, Cambodia, Vietnam, Malaysia, Indonesia, India, and most recently, Taiwan.

Since the 1990s, hip hop has served as a platform for artists like 24Herbs and Softhard, who are included on this list, to air their frustrations and commentary of Hong Kong culture. In the early 2000s, the hip hop music scene in Hong Kong expanded—their economy, immigration, and young culture all saw growth during this period. Different subcultures began to form, and Hong Kong’s film industry capitalized on a growing artistic trend that is still going strong in hip hop today.

Jackson Wang, a native of Hong Kong, may now be a household name globally, but everything for him started in his hometown. The multihyphenate participated in a JYP Entertainment global audition in 2010, was selected as a trainee, and ultimately made his K-pop group GOT7 debut in 2014.

Since then, Wang has established a prestigious solo career that has expanded into practically every aspect of entertainment, including leading his own label and fashion firm, Team Wang. Most recently, he made his stage debut at the Coachella music festival in April as part of the 88rising artist showcase. His most recent English-language track, “Blow,” is named as one of the Best Asian Hip Hop and R&B Releases of the Year so far.

Hong Kong-raised Japanese rapper TXMIYAMA (pronounced as ​​tomi-yama) often explores the underrepresented experience of being a third culture kid and the idea of home. Beyond articulating his personal experiences, the rapper has never shied away from using his music as a medium for criticizing political realities and the struggles of fellow immigrants and refugees drawn from his upbringing in Hong Kong.

Ghost Style, Phat Chan, Kit Leung, Sir JBS, Drunk, and Dor Yuk made up the pioneering hip-hop trio 24Herbs, which began making music in 2006. The trio is acknowledged as one of Hong Kong hip hop’s most influential and pioneering voices.

In 2008, the group released their self-titled debut album 24Herbs, with the deluxe edition of the album included a remix of the group’s song “照做” (Follow Suit), featuring renowned Chinese-American rapper MC Jin.

24Herbs continued to be actively involved and influential in the Hong Kong hip hop scene beyond making music. What’s Good Music Awards, the first hip hop and R&B music awards in Hong Kong, were founded by members Phat and JBS and will be held this summer.

Hong Kong-raised Filipino rapper JB, also known as Jiggie Boy, is well-known for using satire and whip-smart wordplay to explore contentious subjects in his music. He first encountered hip hop through dance crews in high school, and in 2011 he began posting his original songs online.

JB is not hesitant to express his opinions regarding greater Hong Kong society as an artist, even at a risk. He released “FUCKTHEPOPO” the same year as a protest song against the Hong Kong police. The song has not been formally published yet.

As a result of the track, JB said that he received death threats, had several shows in mainland China canceled, and lost a movie deal with celebrated actor Simon Yam as a result of this protest song. JB responded to the losses in an interview with Tatler Asia by saying, “I don’t regret it, that’s part of me.”

Award-winning producer and rapper Dough-Boy has collaborated with a diverse group of musicians, including MC Jin, MaSiWei of China’s Higher Brothers, and Jackson Wang.

The rapper-producer credits his cosmopolitan upbringing as result of growing up in Canada, Singapore, and Hong Kong for inspiring his inventiveness and musical style. Dough-Boy, who began making beats in high school and throughout college, received his first major break when MC Jin asked him to produce his 2012 album Homecoming.

He produced “The Way We Dance” in 2013, which was on the soundtrack of the aforementioned indie film, and won Best Original Song at the Hong Kong Film Awards. Dough-Boy took it upon himself to perform music he wrote and eventually released his debut album Chinglish in 2017 after years of doing so for other artists.

Since then, the musician has only reached incredible heights and has recently been more adventurous with trap and traditional Chinese instruments.

Focus tracks: “No Tattoos”; “No Time”

Tyson Yoshi is one of Hong Kong’s fast-rising artists. The artist was a self-confessed misbehaving schoolboy before he discovered his knack for music.

In an interview with the South China Morning Post, Yoshi describes how he was sent to boarding school in Britain as a young boy, where he was encouraged to develop self-discipline. The artist is now recognized for his rapping and singing abilities for songs he wrote himself in both English and Mandarin. Yoshi struggled before deciding to devote himself to music, juggling his musical career with long hours at a design firm.

His biggest break came in 2021, when the AsiaWorld Arena, Hong Kong’s largest venue, invited him to sing at a Commercial Radio event with over 8,500 attendees.

Focus tracks: “That Guy”; “if i die tonight”

Singer-songwriter Jace Chan made her musical debut in 2019 with the song “想突然” (Want To Suddenly), which featured Phat. She took home the “New Artist Award” at the Metro Radio Hit Awards, one of the biggest award ceremonies in Hong Kong, in the same year.

Chan trained as a dancer since she was 15 years old but admitted in an interview that she was always hesitant to call herself one. She went on to pursue a career in music, and shared that when she was studying in the United States, she took motivation from others around her who weren’t scared to follow their aspirations, asking: “Why can’t I just say what I’m passionate about? Why not pursue my dream when I have one? Why can’t I just say out loud what I’m proud of?”

She started her career in the music business in 2016 as a show host for UM Webzine, a division of Universal Music Hong Kong. She discovered her love of performance while working there, and she accepted an offer to sing with the local band Dusty Bottle. Chan has two albums out as of 2022: Processing from 2021 and UNBORDERED Live. She is now recognized as a female musician to watch out for.

Chi-ho and Hui Yin, the duo behind MC $oHo & KidNey, are childhood friends who entered the entertainment industry online through the popular YouTube channel CapTV. The pair started the YouTube channel Trial & Error in 2015, which currently has over 400,000 subscribers. Since then, they have established a reputation and fan base for themselves as actors.

In their conversational rap rhymes, MC $oHo & KidNey break away from their actor personas and incorporate pop and synthesizer sounds with humor and Cantonese vernacular. In 2021, the rap duo made their official musical debut with the song “係咁先啦” (First), which also included Kayan986, another placeholder on the list.

Kayan9896 might have just literally started out her career, but the promising songstress is also a model and actor. She first captured public attention with her appearance on MC $oHo & KidNey’s YouTube channel Trial & Error in 2020, with whom she’s gone on to collaborate on tracks like “Bacardi” and “係咁先啦” (First). In December, she shared her first self-written single “Be Around” produced by Silverstrike and has now been dubbed as an artist to watch for her soothing vocals and languid R&B-pop sound that seems reminiscent of South Korean R&B sensibilities.

Although the talented singer-songwriter has just recently begun her music career, Kayan9896 is also a model and an actor. She first came to the public’s attention in 2020 when she appeared on the YouTube channel Trial & Error of MC $oHo & KidNey, with whom she later worked on the songs “Bacardi” and “係咁先啦” (First).

Kayan9896 debuted her first self-written song, “Be Around,” in December. Since then, she has gained recognition for her soothing vocals and R&B-pop style.

Focus tracks: “Be Around”; “Bacardi” with MC $oHo & KidNey

Rap duo Softhard—made up of DJ Hard “Jan Lamb” and MC Soft “Erik Kot”—first gained popularity in the 1990s and early 2000s. They released their debut self-titled album in 1991, along with subsequent mixtapes and recordings.

Their work made Softhard one of the first hip hop acts to enjoy commercial success in Hong Kong. The pair is particularly well-known for their performance of their famous song “Gala Gala Happy” in Jackie Chan’s 1993 movie City Hunter, directed by the renowned Hong Kong filmmaker Wong Jing.