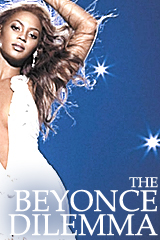 Get Your Mind Right: The Beyonce Dilemma

Ask anybody who knows me… I’m a huge fan of her, ah work. But I must admit, watching her do her thing over the years has really made me think about the role that racial identity plays in the careers of entertainment’s mega-stars.

Racial Identity is a fairly broad term that refers to an individual’s thoughts, feelings, and attitudes about their racial group membership. Race and racial identity are not the same. Suppose you discovered that your parents weren’t your biological parents and that one of your biological parents was from another race. That might change your racial identity. It wouldn’t, however, change your race.

Researcher-types like me usually differentiate between racial identity and its step-sister ethnic identity, which deals with thoughts, feelings, and attitudes towards one’s particular ethnic group. For our purposes, let’s lump them both together into the following working definition: racial identity is how a person feels about being a member of their racial or ethnic group.

Research on racial identity has examined everything from its relationship to academic success to its importance for mental health. Did you know:

• Racial identity, while not a strong predictor, has some impact on health-promoting lifestyles regardless of socio-economic status (Johnson, 2002)

• High levels of racial identity have been associated with heavy drug use for ethnic minorities (James, Kim & Armijo, 2000)

When was the last time you heard Beyonce say anything about being black? By her own admission she’s a survivor, bootylicious, dangerously in love, and irreplaceable, but I’ve never heard her call herself a sista. How about one single, pro-black Beyonce song? Hit up Google. Not gonna find it.

What you will find is a Spanish-language album, duets with Shakira and Justin Timberlake, and a clothing company with a French name (okay, there was that West-African inspired dance sequence in the “Déjà Vu” video, but that doesn’t count).

An unfortunate trend is apparent in mainstream American entertainment, a trend I call the Beyonce Dilemma. The Beyonce Dilemma is the relatively recent phenomenon of prominent black entertainers who don’t actually endorse being black.

The Beyonce Dilemma means having to accept an individual’s outright denial of their own racial membership because you simply can’t deny their talent. Take Jordan, for instance. No one would accuse Michael Jordan of trying to be white. But he sure does do a great job of being un-black. By un-black I mean I’ve never, ever heard Michael Jordan’s personal perspective on anything race-related. True, I don’t know him personally, but given the fact that he’s probably the single most recognizable black man on earth you’d think he’d have something to say about something. In a society where race is tied to literally everything, there exists a universally recognizable black man who doesn’t seem to care that he’s black.

The same can be said of Tyra Banks. Tyra is the supermodel to end all supermodels. Her pre- America’s Next Top Model career easily eclipses all but a handful of other models’ entire catalogue. Since the show’s beginning in 2003, it has topped the ratings charts not just in this country but in markets all across the world (there’s even an Afghanistan’s Next Top Model). Ironically, Tyra Banks is the furthest thing from a black icon. She also hosts a very successful daytime talk show, The Tyra Banks Show. A quick IMDB episode guide search returned more than 130 episodes aired over three seasons. The number of show topics having anything to do with race? Four.

Let Me Upgrade You

The Beyonce Dilemma is more profound than we think. It is my opinion that many of the social problems within the black community can be traced back to our own negative self-image. Because of the harmful, lasting, psychological effects of institutional slavery in this country many black Americans prefer whiteness to blackness (even if they don’t want to admit it).

Researchers at Harvard University have devised a way to measure what are called implicit attitudes. An attitude is implicit if it is hidden. Sometimes we keep our attitudes hidden from others. Other times we keep attitudes hidden from ourselves. The idea here is that it is possible to hold an attitude about something (e.g. gun control, immigration) or someone (e.g. Regis Philbin) and not even realize it.

What might explain this curious finding? Black Americans are richer and more prominent in government, education, and entertainment than ever before. Black pride, it seems, must be at an all-time high. Right?

Because of the Beyonce Dilemma, generations of black kids are growing up idolizing Black Americans that don’t embrace own their racial group membership. Is there any wonder how a young black girl who grows up worshiping Beyonce’s blonde hair and Tyra’s light-skinned complexion would end-up confused?

If Your Status Ain’t Hood

There once was a time when to be black-and-famous meant that you were black-and-proud. Muhammad Ali. Jackie Robinson. Jim Brown. The black community simply would not support an athlete or an entertainer if that individual did not support them. Get Your Mind Right: today, in 2007, James Brown is dead in more ways than one.

Perhaps this is why hip hop culture and music catch a disproportionate amount of criticism from outsiders for its negative aspects like violence, sex, and hatred. What was once a black thing has undeniably globalized into a worldwide phenomenon that now encompasses whites, Hispanics, Asians, Israelis and countless other racial and ethnic groups. Each of these groups, by the way, has racial identity issues of their own, just ask Carlos Mencia. Yet, they all resonate with Hip Hop’s refusal to apologize for itself. That proverbial middle finger just won’t go away.

Misguided, racially confused chaps like Jason Whitlock would have us all believe that we should just hold hands and try to forget about our differences. To them, those differences are to blame for everything from dog-fighting to black-on-black on homicide.

And guess what… Neither does Hip Hop.