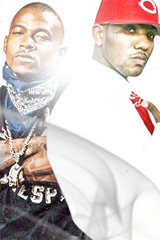 Get Your Mind Right: Hip Hop and Gangs

Thunder and lightning.  Peanut butter and jelly.  Tom and Jerry. Some things just seem to go together…Many folks, both inside and outside of Hip Hop culture, would probably agree that gangs and Hip Hop go together as well.  After all, some of Hip Hop’s most enduring images are those born out of the streets; where gang life is often a reality for young people from New York to Nevada, from Los Angeles to Louisville.

The origins of what has come to be known as gangsta rap can be traced back to southern California in the mid 1960s, where powerfully sophisticated street organizations began to influence the local economic and even political landscapes in urban centers like L.A. and Oakland.  The crack game quickly grew (read: exploded) into a cultural phenomenon unlike any seen before it in American history.

As underground fortunes grew, so did the influence that gangs had on urban life in this country.  During the ‘80s, the Reagan Administration even waged a “War on Drugs,” which most people (including myself) saw as an reactionary attack on gangs that were becoming dangerously powerful and downright threatening to Middle America.  After all, you can’t fight drugs.

But you can fight people.  And fighting is exactly what ensued.  Researchers estimate that the War on Drugs resulted in the incarceration of one million Americans each year during one stretch. In the 1980s, for example, the number of arrests for all crimes  rose 28%, while the number of arrests for drug offenses rose 126%.  Communities that were once ravaged by drug dealing pimps now became decimated by police crackdowns coupled with increased gang warfare for control over volatile neighborhoods.

Enter Hip Hop forces like N.W.A., who successfully cataloged the ugly realities of gang affiliation, drug abuse, and police brutality. They, along with untold lesser-known groups of young African American and Hispanic men spawned gangsta rap.  Parallel, if not prior to this movement was the emergence of such east coast icons as Afrika Bambaataa, Kool Herc, and the Universal Zulu Nation (former gang members all raised in the mean streets of New York) spoke out against violence and the dangers of gang life and one can begin to understand the general lack of understanding and ignorance that fueled the media-hyped east coast/west coast “beef” duirng the ‘90s.

But why does the gangster persona dominate Hip Hop even to this day?  How is it that in real life gangs are ugly, but on MTV they are glorious?  What is the link between the gang-mentality and Hip Hop? Is Hip Hop really just a “G Thang”?

For answers, I turned to one of the world’s foremost experts on gang lifestlyes (or as he prefers to say “death-styles”): Mr. Bruce George.  He is co-founder of Def Poetry Jam, and founder of The Bandana Republic, a literary anthology written by gang leaders and their affiliates encompassing creative literature, poetry, short stories, letters, and interviews written by former and current gang members.

DX: What is your general experience with gangs?

BG: I’m from the “wild, wild westside” of the Bronx, in New York City. I was very much exposed to gang culture at an early age, 11 years old. It was very natural for a person of that time to fall in line with one gang or another. The zeitgeist of the time was to clique-up. Gang culture is a “defensive culture,” so we took defensive postures as a result of the hand that was dealt to us from a lack of after school programs, poverty, police brutality, oppression, suppression. Just like the old adage states, we are products of our own environment.

I was with several crews, organizations, gangs which had given me a sense of belonging and power that I didn’t otherwise have or feel. When you are young, you don’t have a sense of mortality so I fell into gang culture very easily and quite frankly enjoyed the power that came with being aligned with a surrogate band of brothers and sisters.

DX: In your opinion, what are the major reasons why individuals gravitate toward gangs?

BG: People have a tendency to gravitate towards gangs because of their deep-seeded sense of belonging. When you come from a very toxic and violent-laden community, it’s human nature for you to play “defense” as a way to protect yourself. A major impetus that drives gang recruitment is living in an adversarial environment where you have to act in certain ways in order to survive. If you don’t travel in convoys, that makes you that much more vulnerable to being attacked by crews/gangs so you avoid traveling alone. When you are alone you conduct yourself in ways that makes you less of a target. There’s an old tactic we would employ called “playing pockets” where we would keep our hands in our pockets to create the illusion we had a weapon even though most often times we had nothing but lint between our fingers.

I feel there are a number of factors that contribute to individuals deciding to enter into gang culture and that decision is very personal. There’s an expression that states that “situation determines appropriateness.” Not everyone enters into gangs because of fear! A lot will enter into gang culture because it gives them full rein to exercise the power they never had as well as give them the opportunity to displace deep-seated anger from life’s trails and tribulations.

BG: For a person to think that gangs are circumscribed to just an urban milieu, is a testament of them having a myopic or ill informed view/perspective on “gangs.” The word “gang” is a media driven word that’s generic in nature. The media gives phenomena names as a way to define it so in turn it can control it. Gangs are really “street organizations” or “street tribes” if you were to apply that nomenclature utilizing and enveloping an urban vernacular and culture.  With that said a “boys club” can easily fall into gang status if the goals are the same as individuals who are validated as gang members.

In fact when you study gang history you will come to find out that most of the well known gangs of today were born out of boys clubs, especially the gangs of New York. So gangs have always been prevalent in affluent neighborhoods. Since they come from privilege they can afford to keep their lifestyle/death-style underground. They are not profiled and policed as urbanites are profiled and policed. History dictates that urban gangs were activated as a result of suburban gangs fighting to keep their neighborhoods gentrified. As a result we had to protect ourselves from these night-riders thus we had to clique-up. Like I had stated earlier, gang culture is a defensive culture.

BG: There’s a difference between “industry” and “in the streets.” Those so-called rap artists who are seen in rap videos portraying a lifestyle of “thugdom” and “gangdom” seldom have had any experience with what they are projecting. They are basically satisfying the wishes of the powers that be that make money off of the death of black and brown folk. That’s why when a famous rapper/emcee dies, the record company makes more revenue than when that rapper/emcee was alive and kicking, visa vie Tupac Shakur and Biggle Smalls.

Those in rap videos who falsely posture as gang members are responsible for the proliferation and bastardization of gang culture. This in turn has led to there being copy-cat gangs across the country that try to fit their frame of reference into the contours of L.A. gangs like the Crips/Bloods. In turn, you have a crop of gangs popping up that have no structure, unity, loyalty and knowledge of the particular set they are claiming. A lot of them are not studying or applying their lessons properly. For instance, the word “Blood” is an acronym for “Brotherly Love Overrides Oppressive Destruction,” and the word “Crip” stands for “Community Revolution in Progress.”

All of those rappers who portray gang culture in rap videos in a fanfare fashion have a lot of blood on their hands. That also goes for those who portray drug dealing as a right of passage which only further feeds into the stereotype of a black and brown people who for the most part are hard working and productive law abiding citizens of society. True validated gang members have a bone to pick with all those making a mockery of their way of life/death.

DX: How affiliated was Tupac Shakur?

BG: I don’t know how affiliated Tupac was with validated gang members, but I do know he had a strong affiliation with some Bloods, due to his relationship with Marion “Suge” Knight who’s allegedly a validated member of the Bloods. Tupac may have had affiliations with a myriad of sets due to his down to earth nature.

DX: What is the single biggest misconception about gang life?

BG: That is a great question. I think that most people have a view of gang members and their lives as them all being rapists, killers, drug dealers etc… that’s definitely a stereotype. There are gang members that protect their neighborhoods from rapists, killers and corrupt police. There are countless gang members who are authors, activist, poets, professors, politicians, entertainers etc… A lot of people don’t know that the late Dr. Martin Luther King, Jr. utilized the Black Peace Stones and other gangs from Chicago and other cites as security for him and others in hotbed protest areas.

I would be remiss if I didn’t point out that the Black Panther Party’s members such as Bunchy Carter and Fred Hampton came out of gangs straight into the BPP. Your question is one of the reasons why I founded  The Bandana Republic, a literary anthology by gang members and their affiliates.  I’m the founder/managing editor, Louis Reyes Rivera is the co-founder/editor and Hall of Fame running back Jim Brown has written the foreword. The book was created as a way to give real validated gang members a platform to express themselves via the arts which in turn will break down a lot of the stereotypes of gang members as being idiots without talent. It’s a known fact that some of the most profound art and literature comes from prisons and from the streets. Hip Hop culture is a prime testament of the influence of street culture.

BG: They both influence each other. Like Dr. King said, “What affects one thing directly, affects another thing indirectly.”

Get Your Mind Right; gang life (like Hip Hop) isn’t what you see on TV.  For more information on the Bandana Republic check out: www.myspace.com/thebandanarepublic or www.softskull.com