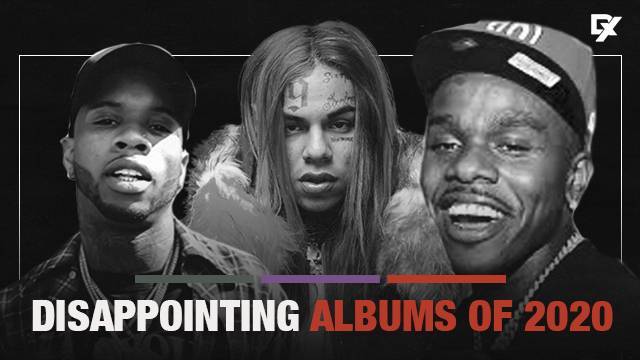 Most Disappointing Albums of 2020

Music has always had the power of reflecting the state of the world. So as one can imagine, with the horrible year of 2020 finally behind us, fans are left with a slew of disappointing projects that mirror the lackluster times.

As in the case of Lil Uzi Vert and Future’s Pluto x Baby Pluto, some of these albums fell short of expectations. Others, such as Tekashi 6ix9ine’s infamous TattleTales, proved to be worse than we would have guessed — despite the low standards.

From Trippie Redd’s upward trajectory marred by the lackluster Pegasus to 2 Chainz and his T.R.U. crew attempting to make waves with a joint album, take a stroll with HipHopDX as we recall 2020’s largest flops and biggest disappointments. Tory Lanez is well ahead of his competition for the most disappointing release of the year. He developed an extraordinary following last summer’s Quarantine Radio, murdered Jack Harlow’s “What’s Popping (Remix)” and then quickly and utterly fumbled any acclaim earned by allegedly shooting Megan Thee Stallion — and denying any involvement. On the post-shooting release DAYSTAR, the Canadian rapper makes excuse after excuse for the incident while backed by unimaginably boring melodramatic beats. A grueling hour and some change listen, the effort resulted in Tory’s lowest-performing album to date. Good job?

DaBaby – Blame It On Baby Even an artist as prevalent and prominent throughout rap as DaBaby can release subpar projects. Though he conquered 2019 as HipHopDX’s Rapper Of The Year and was featured on seemingly every hyped-track of the last two years, the Charlotte Hornet missed badly on Blame It On Baby, an LP only salvaged by its quadruple-platinum runaway hit, the Roddy Ricch-featured “ROCKSTAR.” But like any good creative, DaBaby processed the negative feedback and released the much improved deluxe edition and his emotional homage to his late sibling, My Brother’s Keeper (Long Live G) EP. 2 Chainz, backed by his The Real University (T.R.U.) students, sounds lost on their compilation project No Face No Case, which released last February. The ATL rapper has served as one of the region’s bards for over a decade, so his cosign is typically trusted but on No Face No Case, the T.R.U. rap collective (comprised of Skooly, Worl, Sleepy Rose and Hott LockedN) accomplish nothing across the project’s 15 tracks. Sadly, Chainz is even overshadowed by mediocre performances by his protégés. With his solid solo project in So Help Me God! on the way, fans know 2 Chainz is still on point — he just took an L along the way. Trippie Redd is an artist who we expect to be around for a while. He’s got a knack for crafting emotive melodies and can bar-up most of his former SoundCloud peers. But Pegasus is an overly ambitious project that falls short of its desired aim. Even with a high-powered cast of guest features, the only notable song was “Weeeeee,” which grew to fame thanks to going viral on TikTok. Despite the hiccup of his latest effort, Trippie is on a sharp, upward trajectory and shouldn’t let this fantasy obstacle hold him back. Even Tekashi 6ix9ine apologists are still shaking their collective heads at TattleTales, the first post-prison album from the Brooklyn-born rapper. “TROLLZ,” his collaborative effort with Nicki Minaj landed 6ix9ine his first Billboard No. 1 before it plummeted to No. 34, breaking a record for the biggest drop from the top slot in Billboard’s history. TattleTales is a collection of incoherent, incompatible tracks thrown at the charts to see what sticks. The absence of focus, maturity and any form of creativity makes TattleTales a tough half-hour listen no one would wish on their worst enemies. Blueface didn’t grow to fame through being a good rapper. He might as well be a reality TV star, given the amount of time he spends recording women fighting in bikinis and the lack of time he spends on his music. Find The Beat incredibly met the low expectations one would associate with a Blueface album. Loaded with equally-unlistenable features from Ambjaay, Stunna 4 Vegas and YBN Nahmir, Find The Beat is a poorly-masked cash grab from an artist plummeting out of musical relevance. For better or worse, when Drake drops the world drops what they’re doing to listen and even a bad album from Drake will garner acclaim. But Dark Lane Demo Tapes rivals 2018’s Scorpion for the worst effort in the 6 God’s discography. It’s a bad sign when the two most noteworthy songs, “Toosie Slide” and “Pain 1993,” only grew to notoriety through TikTok dance trends and memes about Playboi Carti’s baby voice. But Drake is gearing up for Certified Lover Boy this months, so fans are hopeful for a more satisfactory project. All fans want is for Dave East to live up to his full potential. But with Karma 3, the latest in what seems like an endless string of “debut albums” from the Harlem rapper, is yet another disappointing offering from an artist with some undeniable talent and Nas as a mentor. Perhaps he was too distracted while acting as Method Man in Wu-Tang: An American Saga to give this album the focus it needed. But after a lukewarm reception, East double down on an equally average deluxe edition. Lil Uzi Vert and Future are two of the most prominent rappers in rap right now. So when it was announced they’d partnered for a new joint album, fans thought they were about to be taken to outer space. But when Pluto x Baby Pluto arrived, fans were left confused — how could this super duo have such terrible chemistry? Across the 54-minute album, Future and his protégé trade mediocre bars that occasionally produce a hit. Like much of the music he released this year, Future was adequate but Uzi, fresh off one of the best albums of the year in Eternal Atake, could have achieved so much more.