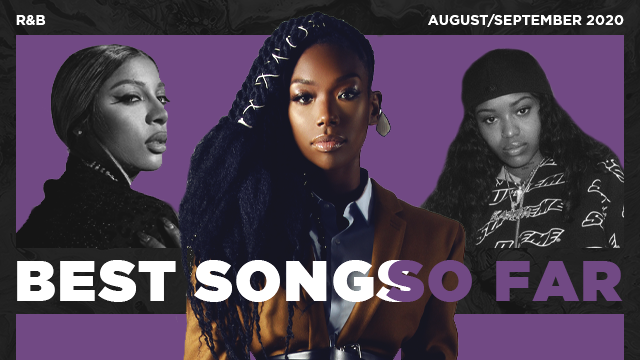 The past few months have felt like years due to all of the chaos happening in the world, but music fans have been blessed with a lot of good music in 2020. During August, listeners received new songs from Victoria Monet, Aminé and Summer Walker, Burna Boy, Kaash Paige, and even a surprising drop from Snoop Dogg.

The following list is part of DX’s monthly “Best of The Year” series. Check out some of DX’s other lists to stay up-to-date with all of the new music dropping this year.

Here is HipHopDX’s playlist of the best R&B songs of 2020. And don’t forget to follow us on Spotify for updates!

Uncle Snoop temporarily abandoned his lighthearted persona for a tribute song dedicated to the late Nipsey Hussle. The moody song pays homage to Snoop’s love of R&B with a sample of Dorothy Moore’s 1970s hit “Misty Blue” and paints a somber picture of the long-lasting effect Nip’s death had on the West Coast legend. From Aminé’s wildly critically acclaimed Limbo comes “Easy” featuring R&B goddess Summer Walker. The “REEL IT IN” rapper wails beautifully about unrequited and difficult love, all backed by Walker’s smooth tones. With groovy and soulful ’70s-style production, the track is primed for the cool weather of autumn. Burna Boy’s impassioned vocals go a long way on the “Way Too Big,” one of the standout tracks from the Nigerian star’s Twice As Tall. Upheld by contagious drums and an EDM-inspired Afrobeat backing vocal, Burna Boy’s voice is carried to the stars. Sometimes tender, sometimes powerful, Burna Boy has proved he’s no longer on his way, he’s already there.

The Hip Hop world is still reeling from the loss of Chicago rapper Juice Wrld last winter. Luckily, fans were blessed with the posthumous Legends Never Die, a packed-to-the-brim tale of Juice Wrld’s life and the joy and tragedy he experienced during it. “Smile” featuring The Weeknd’s glittery assistance surmises the light and dark sides of Juice’s life, resulting in a heartbreaking and powerful song about love.

In the music business pre-internet, being ahead of your time was never a good thing. This is the case of Adina Howard, flaunting so much sex appeal on her 1995 hit single “Freak Like Me,” she made TLC look like Jehovah’s Witnesses. And while Howard’s career never took off, her only hit’s bluntness has inspired many that came after her, as evidenced by South Florida’s Savannah Cristina interpolating the pioneering classic into the sultry love song “Gold Mine.”

On “Dying 4 Your Love,” Snoh Aalegra believes she’s found that special someone despite the resistance of exclusivity from her object of desire. And while she was once OK with the lack of commitment, she’s grown tired of the games. The conflict in Aalegra’s voice sells the song, switching her tone from annoyance to longing to resignation seamlessly as she offers the final chance to reciprocate the feelings she has.

Baby Rose has already mastered the art of storytelling just by the inflections and tones she strikes in her music, flaunting a distinct voice that could make the alphabet sound profound. “Marmot” is another example of the power her warbling vocals possess to evoke everything she feels in the moment and has endured in 25 years of life.

With the country’s Black Mecca under national scrutiny in the aftermath of the Rayshard Brooks police shooting, 6LACK reminds listeners the city is multi-faceted from his POV on “ATL Freestyle.” The breezy single is packed with plenty of Eastside flavor and a melodic sonic lather of hot sauce to match.

Beyoncé always seems to know the perfect time emerge from her queendom to drop new music. With a new Disney+ visual album set to release later in July, “Black Parade” seems to be an indicator of her musical direction. The single sees Bey continuing her rap-sung style that she’s displayed throughout her last couple of projects. The Queen floats over the instrumental as she asks for reparations for her people and references police shooting rubber bullets at protesters.

Justine Skye knows how difficult it is to cut someone off who you’re deeply infatuated with, as if their presence releases a hit of ecstasy to the neuroreceptors. On “Too High,” Skye tries her best to keep distance, sounding like she’s singing from under a waterfall as she fights the urge to give into her temptations to get back with a guy who she can’t quite get over.

There’s an intimacy unmatched when it sounds like an artist overcome with emotion sat down and just started recording their raw reactions onto a new track. It’s what’s felt when listening to Trey Songz lament on the loss of Black lives “2020 Riots: How Many Times.” Songz’s usually smooth voice cracks and strains as he struggles to vocalize his agony over the countless murders of Black people at the hands of police across the country, resulting in an emotional performance where he knows the question he’s crying out for an answer to is sadly rhetorical.

“Elephant In The Room” – 6LACK

While the world goes through crazy times, Chloe x Halle’s “Do It” provides the feel-good summer vibes that we need right now. Set to live on the duo’s forthcoming LP Ungodly Hour, the Scott Storch-produced track focuses on doing you and keeping good people in your circle. And with a hook as melodic as this, it’s going to provide for some great shower singing.

Kehlani’s “Water” lives on the Oakland songstress’ sophomore effort It Was Good Until It Wasn’t and finds Lani taking the reigns on a sexual relationship she’s hella into.  You’re going to need exactly what the title suggests when you’re through with this piano-heavy sultry track.

When he’s sitting in his plush Toronto enclave thinking of those brooding paragraph texts you’d send recklessly, Drake is arguably in his best element. That feeling of being too paranoid to love even when he wants to try that gave us “Marvin’s Room,” “Jaded” and other caption-worthy Drake records. “Not You Too” with Chris Brown is a highlight from Dark Lane Demo Tapes, from producer Noel Cadastre’s skittering drum patterns and swinging melody to Drake calling out for “trust” amidst a relationship where all the cards aren’t on the table.

Par for the course, Kehlani lays all her emotions out on the table with “Grieving” featuring British singer-songwriter James Blake. Over a slow, brooding beat, the Oakland-born artist mourns the loss of a relationship in the most brutally honest way possible, while striving for peace and quiet in her life.

Although quarantine has severely limited most activity, Young Thug and Chris Brown’s “She Bumped Her Head” makes it virtually impossible to sit still. The slick trunk rattler finds both Slime & B co-stars catching a lob from the ever-drippy Gunna as the trio bounce nimble melodies at a rapid pace.

“Bare With Me” – Teyana Taylor

The London-based members of Radiant Children started off as session musicians but have evolved into a full-on band. On their latest single, naked guitar riffs lead into an uptempo, driving-with-the-top-down summer vibe with vocalist Fabienne Holloway confidently singing, “Sky mind/Watching the clouds come and go,” painting a vivid picture of a perfect day in the listener’s mind. The opening lyrics of SiR’s “Rapper Weed” injects visions of “clear skies” into the listeners head but the sweltering vibe of the Cali-bred track adds a sprinkle of palm trees, endless sun and a warm wind to match. Naturally, quarantine life has prevented that from being a reality but this smooth number on blast mixed with a cracked window, light breeze and even more lit blunt will make for proper compensation for the time being.

Donald Glover a.k.a. Childish Gambino continues to channel past styles to craft his best music. After reaching back to the glory days of P-Funk for his Awaken, My Love! Album, Glover evokes the sounds of ’80s on his Ariana Grande-assisted “Time.” In wake of the COVID-19 pandemic, the track seems particularly prescient with its theme of days passing by without grasping one’s true meaning and purpose.

Los Angeles bass impresario Thundercat poured his heart out for “Fair Chance” while remembering his late friend and collaborator Mac Miller. With a little help from Ty Dolla $ign and Lil B, the talented trifecta promise to keep “holding it down” for Miller over the song’s ethereal, downtempo beat.

The Weeknd has become known for his moody anthems about complicated relationships and over-indulging in everything from women to drugs. “Snowchild” is a detour from Abel’s usual writing themes, finding the Canadian singer reflecting on how far he’s come in his journey. The song reveals The Weeknd’s more introspective side and provides listeners a look into his life.

Jhené Aiko’s new album is filled with noteworthy songs, but “10k Hours” stands out with it’s smooth melody, heartfelt lyrics and of course a feature from Nasty Nas. The New York legend gets vulnerable about a lost relationship on the track providing the perfect accompaniment to Jhené’s verses.

“After Hours” – The Weeknd

The Weeknd’s ability to create hits is uncanny but with his “After Hours” single off his LP of the same name, Abel delivered a six-minute song unlike his previous releases from the project. The beat switch at around the two-minute mark transitions the song from a moody ballad to an uptempo jam. The Canadian crooner changes the mood once again and closes off the song with another beat switch.

H.E.R. has started off the year by releasing a slew of singles, but “Comfortable” is the closest to the sound that made the world fall in love with her voice. The stripped down guitar matches H.E.R.’s vocals perfectly as she displays just how comfortable she is with her artistic direction.

Creating a beautiful melody while singing about a durag is a talent many singers don’t have, but Thundercat is an exception. The bass prodigy’s latest single stays true to form with a funk-inspired instrumental and stellar vocal performance (the comedic video is also required watching). The track comes from his It Is What It Is album, the follow-up to 2017’s Drunk.

Phony Ppl’s latest single delivers a blend of old-school funk with modern vocals and a stellar rap verse from Megan Thee Stallion. What more could you ask for from a single in 2020?

070 Shake delivers a unique blend of nostalgic synths and modern drums on “Guilty Conscience,” which comes from her Modus Vivendi project. Shake bends genre’s on this track, mixing R&B vocals with pop hooks and memorable melodies. There’s no denying the singer has found her sound and “Guilty Conscience” is the perfect sonic display.

dvsn returned from their hiatus to deliver a new single, preparing fans for their upcoming release. “A Muse” is a fresh twist on a classic sample. On the song, the Toronto duo sampled Lonnie Liston’s “A Garden of Peace,” which was infamously sampled on JAY-Z’s “Dead Presidents.” Below is a list of more songs that are still on repeat. Check back monthly for more of the best R&B songs of 2020.

You can also check out the best R&B songs from each month: