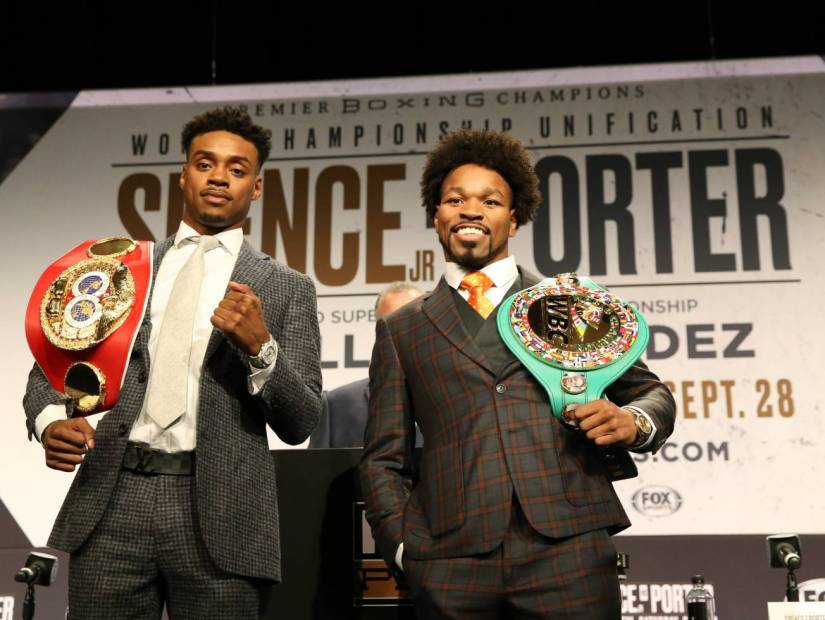 The significance of that fight is that it marked the last time two African-American boxers squared off in the ring in a meaningful PPV match that carried an inkling of suspense.

On Saturday, a new generation of black fighters will take the main stage when IBF champion Errol Spence Jr. (25-0, 21 KOs) takes on WBC titleholder Shawn Porter (30-2-1, 17 KOs) in a welterweight unification fight at the Staples Center in Los Angeles.

One of the biggest fights of the year will be broadcast on Fox PPV, as both boxers with different fighting styles and musical palettes alike look to debunk the myth that black fighters can’t sell the big one without boorish behavior or a Latino dance partner.

Marquee boxing events that want to attract eyeballs, especially those on PPV, historically have had headliners take twisted turns for the sake of promotion. But that hasn’t been the case for Spence and Porter, who have abstained from outlandish remarks and crazy social media tirades that provide headline-grabbing stories.

They’re instead hoping their skills and gentleman-like demeanor can connect with the hip hop generation, who traditionally have supported heels like Mayweather and Adrien Broner for their unpredictable antics.

“Executives were debating whether or not to put this fight on pay-per-view. They didn’t know if two African-American fighters could pull in a big audience, and draw,” Porter told HipHopDX in an interview. “We’re two clean-cut guys. I’m trying to be a positive person, inspiring and motivating every day. That translates to the public as well.”

“You don’t see this too often in having two top-level black fighters on PPV. It’s a rare occasion, and it means a lot to be headlining the show the way we are,” Spence told HipHopDX in an interview. “It’s great, just from that aspect. It changes the narrative that black fighters can’t sell fights. I’m appreciative of it and glad it’s happening.”

If superstar Canelo Alvarez has the backing of Mexico, who do Spence Jr. and Porter have in terms of a country? Americans need to start supporting boxing, especially black fighters, or the sport will continue to promote fighters outside of the U.S. with built-in audiences in order to make money, instead of staging fights by pitting the best against one another.

That Catch 22 is mostly a reason why a super fight between Spence and formidable foe Terence Crawford still hasn’t been procured. Both fighters are mild-mannered and interested more in creating headlines in the ring rather than outside of it. As a result, their marketability seemingly suffers to the average American who tends to eat up sensational headlines like they do opponents, and promoters are stuck slowly building them up fight-by-fight in search of a core audience.

Dallas’ Spence Jr. and Cleveland’s Porter are two talented fighters who have carried themselves with class throughout their careers. They’re both family men, religious and respectful to those around them — and each other.

“I took the responsibility of changing the persona of a professional boxer,” said Porter. “We’re likeable good-looking guys who give it their all in the ring but still have the bad boy image. We just don’t create a ruckus. Fights like this are going to change perception.”

Spence Jr., who has been rocking Polo G’s anthem “Pop Out” throughout training camp preparing for the biggest fight of his life, is favored to win thanks to his superior size and elite skills. He’s coming off an impressive one-sided destruction of Mikey Garcia in front of 47,000 fans at AT&T Stadium in Dallas.

“Shawn comes to fight and I embrace that. I can’t wait because I promise this is going to be one for the history books,” said Spence, who lists JAY-Z, Nas, Boosie Badazz and Teddy Pendergrass as his favorite artists.

Porter has beaten the likes of Broner and Danny Garcia and is a throwback fighter who presents a rough and rugged style. He’s a tough test for anyone he fights and is just as old school outside of the ring, listening to the likes of Anita Baker, Luther Vandross and Bobby Brown and rocking suits that sometimes look like he stepped out of the set of “The Great Gatsby.”

“Being in the underdog position is literally where I come from,” said Porter, a karaoke connoisseur. “I’m aggressive and I’m strong and guys can’t handle it. I’m always ready to do whatever it takes to get the job done.”

Spence and Porter even have a previous relationship entailed with cordial dealings and respect.

Kenny Porter, Shawn’s father and lifelong trainer, coached Spence ahead of his 2012 Olympics run. Both fighters have even played basketball together at Porter’s Las Vegas church, and both Porters traveled to England to witness Spence win his first world title in 2017.

Friendly fire will cease Saturday (September 28) and instead turn into state-sanctioned violence. It will bring each of them closer to gaining lifelong fans for the right reasons, and give the next wave of American-American fighters hope that they can cooperate as the main headliners with a clean image.