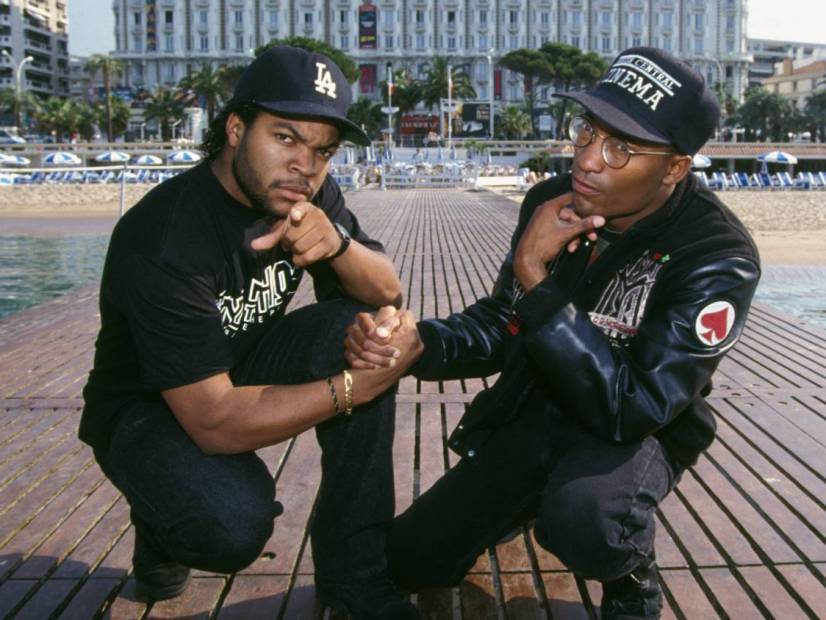 Here’s an unforgettable memory from two black men on and offscreen that played the biggest role in my development as a child.

My father took me to see a then young director’s directorial debut Boyz N the Hood when it was released in 1991. He drove us 45 minutes to the nearest theater showing the film in the heavily black-populated state capital of Hartford, Connecticut because the cinemas near us didn’t have it in our predominantly white hometown area of Norwich.

At the time, it was my second greatest black entertainment experience that hit on all cylinders since witnessed Michael Jackson on the Bad tour for the first concert I ever attended three years earlier.

Sitting in a raucous crowd that cracked jokes, I cheered with the crowd upon seeing rap’s most heralded gangsta rapper of the moment Ice Cube as “Doughboy.”

The Boyz N the Hood closing credits played Ice Cube’s funky and dark instructional track “How To Survive South Central” to add his signature on the vivid canvas.

Ice Cube discussed in a 1990 MTV interview that he and Singleton were in similar predicaments as respective rookies acting in a movie and being in the director’s chair when they began working together in 1990 to create the film.

Cube also talked about his transition from rapping to acting and working with Singleton for the first time.

“Acting, I felt like a fish out of water but I caught on,” Cube said. “It’s different from making records, of course. In making the record, I’m the quarterback. Now, I guess I’m like the running back or the tight end waiting for the director to tell me which way to go.

Singleton essentially told Cube that you don’t need to be an alum of USC’s prestigious film school like himself to become a filmmaker.

Cube reiterated that statement upon the news of Singleton’s death when he eulogized him on Twitter.

“I was discovered by a master filmmaker by the name of John Singleton,” Cube said. “He not only made me a movie star but made me a filmmaker. There are no words to express how sad I am to lose my brother, friend & mentor. He loved bring [sic] the black experience to the world.”

I was discovered by a master filmmaker by the name of John Singleton. He not only made me a movie star but made me a filmmaker. There are no words to express how sad I am to lose my brother, friend & mentor. He loved bring the black experience to the world. ..Us at Cannes ‘90 pic.twitter.com/CaRKjZtjgB

The film Boyz N the Hood for Ice Cube was his equivalent to both Barbara Streisand and Lady Gaga’s roles in A Star Is Born.

This makes it fair to say that without John Singleton, would Ice Cube ever have gotten the chutzpah to create the cultural touchstone Friday, Barbershop and the many others in his filmography?

Maybe, but more than likely not.

Perhaps the revolution of young black movie directors including Spike Lee, Robert Townsend, Matty Rich, Ernest Dickerson, the Hughes Brothers and several others in the early 90s could have inspired Cube to become a full-fledged actor and director if they gave him a role in one of their movies at that time. But history can’t be revised here.

Because of John Singleton, the public saw rappers of Ice Cube’s caliber in leading and supporting roles, no longer contained to late night or after-school rap music videos shows of that time.

We’ll Miss You But Your Films Will Live On.

Spike Lee deified Public Enemy with their anthemic “Fight The Power” on Do The Right Thing in 1989. But John Singleton’s lens zoomed in further than Spike Lee’s into what survival was really like for young black men as America’s true endangered species with Cube to drive the low-rider through the Crenshaw hell.

It was only right for Singleton to cast a young, bombastic Cube who penned the Parliament Funkadelic-sampled tune “Endangered Species (Tales From The Darkside)” for his debut solo album Amerikkka’s Most Wanted in 1990.

Ice Cube inspired other rappers such as Master P, Three 6 Mafia and several other to get in the director’s chair and diversify their content beyond the recording studio.

Sure, there had been rappers in movies such as Wild Style, Krush Groove, the Breakin’ series, Beat Street and Tougher Than Leather, which preceded Boyz N the Hood. Some of those films addressed the violence that gave brief glimpses of urban decay, dealt with death, and the protagonists looking for a way out of their dire living situations with their talents. But rappers like Busy Bee, LL Cool J, RUN-DMC and Ice-T in those respective films were mere props in their cameos that spoke directly to the Hip Hop audience whereas John Singleton’s films went above and beyond.

Singleton was the same age as other rappers he cast.

This includes Q-Tip and the late, great Tupac Shakur opposite Janet Jackson, one of the biggest pop stars on the planet at that moment, in Poetic Justice in 1993.

He put Busta Rhymes in front of the camera with Cube for his 1994 film Higher Learning that addressed race relations among college students.

Tyrese Gibson began as a Los Angeles-bred R&B singer (who occasionally raps), will forever be “Jody,” Black America’s Baby Boy who females love to hate courtesy of his on-screen girlfriend and future Oscar nominee Taraji P. Henson. Singleton gave her that film role as a vehicle into being a respected actor in 2001. And before her star power was truly realized by the masses, they reunited for 2006’s Hustle & Flow where Singelton served as a producer while reminding the world it was hard out here for a pimp.

Morris Chestnut is an American heartthrob who we’ve immortalized as “Ricky” and still ponder why he didn’t run the zig-zag to avoid being shot down in Boyz N the Hood’s most tragic scene.

Singleton put also Ice Cube in the Academy Award conversation in 1992 when the film was nominated for an award at the age of 24.

That’s largely credited to the film’s international impact before it grew acclaim domestically.

“Boyz N the Hood didn’t have its debut in the United States, it had its debut at the Cannes Film Festival in France which was my first trip out of the country,” Singleton recalled in a 2012 BlackTree TV special. “So, the movie moved to international acclaim before it hit the States.”

Since then, Cube has been a Hollywood darling that moviegoers find it rare for him to be away from a movie after a two-year hiatus. Singleton was the visionary who made Cube an international movie star when he was the most polarizing MC to the nation’s daytime talk show hosts, R&B-conservative urban contemporary radio stations and the Hip Hop audience.

From being constantly subjected to the ire of public opinion, Cube was aghast about the movie’s acceptance and being heralded as a thespian.

“Talking about somebody who was like, ‘Man, these people are about to shit on our movie,’” Cube said about his prediction of the film’s reception at 1991 Cannes Film Festival. “They about to shit on it because I know they don’t care about what’s going on in South Central Los Angeles,’ you know, that was my thought that the world just didn’t care.

It’s sad to see John Singleton no longer with us. But we can watch his movies and thank him for inspiring several of our favorite rappers to be as powerful as they are today in Hollywood.