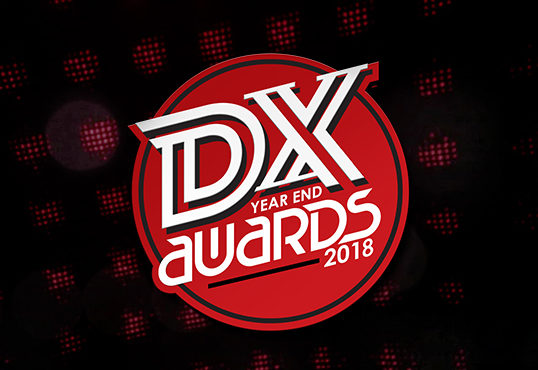 Let’s not stand on ceremony here.

2018 was an awesome fuckin’ year for Hip Hop music. There were streaming records broken at every turn, plenty of albums that lived up to the social media hype and even wack moments that kept us thoroughly entertained.

Without belaboring the point, gather ‘round kids. It’s time for the 2018 HipHopDX Year End Awards.

J. Cole showed he was unafraid to approach a multitude of controversial topics when he unveiled KOD Whether he was tackling the often glorified subject of drug abuse (“FRIENDS”) or predicting a future on Love & Hip Hip as a warning to the younger generation (“1985”) or opening up about his alcoholic mother (“Once An Addict”), Cole demonstrated just how powerful his words can be when used to convey the kind of message Hip Hop used to revere on the regular.

EP Of The Year (Tie)

Had The Honorable Tariq Trotter released his debut solo projects in one blip, would it have received the same fanfare? The world will never know but they did confirm that The Roots MC can hold down records with nothing but dope beats supplied by both 9th Wonder and Salaam Remi and a vocabulary that mirrors everything Webster’s puts out.

Video Of The Year

Childish Gambino – “This Is America”

And the winner for the most woke, turn-up anthem of the year is…

Most Disappointing Album Of The Year (Tie)

After participating in Kanye’s seven-song album folly, an unfocused and bored-sounding Nas walked through the motions on his eleventh studio album. Meanwhile, Nicki’s lukewarm reception couldn’t get the NickiHndrxx Tour off the ground (the Astroworld Tour did fine just in case you were wondering).

Collaboration Of The Year

Much like its dazzling flurries of instrumentals, “Sicko Mode’s” unique cadre made it a herd record to ignore this year. With Swae Lee and Big Hawk’s contributions amounting to a perfect accent garnish, Trav and Drizzy illuminate — like a light — for one of the most creative Billboard chart-toppers of all time.

Slept-On Album Of The Year

One listen to Buddy’s long-awaited studio debut album and it will induce frustratingly-heightened joy that will make you ask, “Why isn’t this is guy more known?” With records like “Shine,” “Trouble on Central” and “Hey Up There” that are drenched in post-modern G-funk, we’re still asking the same thing.

That’s right. 2017’s winner in this category has done it again.

Whether it was becoming the first female artist to have 13 songs simultaneously hit the Billboard 100, the first female rapper to score three No. 1 records on the very same chart, or racking up hardware at the BET, Billboard, AMA’s and MTV VMA’s, Cardi B superseded all expectations for her still growing rap career.

Spoiler alert: If she wins at least one Grammy Award next year, expect Young Belcalis to win this award for the third consecutive time.

Comeback Of The Year

On November 6, 2017, Robert Rihmeek Williams entered the State Correctional Institution—Graterford in Pennsylvania with the same reckless abandon his rapper persona, Meek Mill, used to dictate his course of actions.

Yet following his release that following April, a calculated and collected Meek incidentally became Hip Hop’s leading voice for culture reform, appearing on high profile platforms such as Good Morning America, The Daily Show and Ellen.

After easing back into the studio with a short summer EP, glory was achieved when he released his fourth studio album, Championships, to return back atop the Billboard 200.

Beat Of The Year

There’s nothing surprising about a Drake-featured smash single these days. But underneath the vision of Travis Scott, the Billboard chart-topping record manages to unlock an echoey labyrinth of distilled synths, magnetic keys, and DJ Screw.

In a nutshell, it sounds just like the Astroworld album cover looks.

Rapper Of The Year

With his biggest criticism being that he ignores valid criticism, Jermaine Cole tweaked his lyrical guns and musical discretion to bang out KOD: a Spotify and Apple Music-record breaking, self-care teaching, Billboard chart-topping, demon-excising wallop of an album.

From there, Cole steered an infamous Kevin Hart storyline into greener pastures, embarked on his nationwide KOD Tour, found time to appear on tracks with his Dreamville artists Bas, J.I.D. and Ari Lennox and of course, find time for various charitable random acts of kindness.

Although the culture as a whole currently reps a face of rebellion and tattoos, in 2018, J. Cole was the 180° line that kept Hip Hop reigning as a conscious expression.

Verse Of The Year

It’s safe to say at the top of 2018, Jay Rock still had something to prove in his career elevation.

And as 2018 comes to a close, it’s safe to say the TDE trailblazer accomplished said career elevation.

Before he impressed the world with his now best album Redemption and its accompanying tour, Eastside Johnny was a key player on the now Grammy-nominated Black Panther: The Album, most notably the standout single “King’s Dead” alongside Kendrick Lamar, Future and James Blake.

Never mind Future’s lyrical puzzlement. Rock attacked the booming record with intensified crimson fury while forever making it a blast to call someone a “lil bitch.”

There isn’t much about Nipsey Hussle’s current approach that reeks of old school metrics. However, the Crenshaw mayor surely took it back to the days of pushing a compact disc by working his studio debut, Victory Lap, well past the finish line and well into the parking lot.

Upon its release in February, there wasn’t a worthy news outlet that didn’t have a Neighborhood Nip interview (including the inaugural episode of DX’s Soulful Sundays) all the while gracing Victory Lap Tour, Rolling Loud and Powerhouse stages.

On the business front, he and his All Money In team operated their independent merch store and found time not only to collaborate with Puma to better the lives of the local children and the drip but they teased his own line of Vape pens. Everything seemingly paid off in December with the Grammy nomination announcement for Victory Lap.

The marathon will obviously be continuing in 2019.

TV Show Of The Year

Despite being it an incomparable artist himself, it is Donald Glover — not Childish Gambino — who is tacking on to Atlanta’s storied Hip Hop history outside of legendary strip club anthems and Dirty South riboflavin. The celebrated deadpan series has become must-see viewing on the night of its airing and supporting cast Brian Tyree Henry, Lakeith Stanfield, and Zazie Beetz are all doing a bang-up job to complement the stellar screenwriting. Where were YOU the first time you met Teddy Perkins?

Movie Of The Year