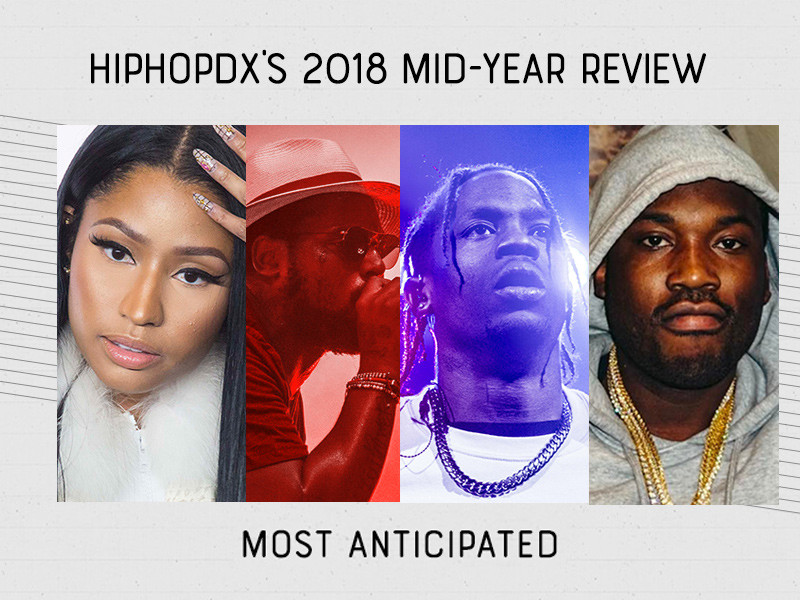 The 10 Most Anticipated Rap Albums For The Rest Of 2018

The first half of 2018 has come and gone and we’ve seen major releases from most of Hip Hop’s heavy hitters, including Drake, Kanye West, Nas, J. Cole and Pusha T, plus collaborative albums from The Carters and Kids See Ghosts.

While most of the artists on HipHopDX’s previous list of the most anticipated Rap albums of 2018 dropped a project already, there’s still plenty to look forward to. With the trend of surprise albums growing, it’s anybody’s guess as to who else might drop out of nowhere like Freddie Gibbs and The Carters did earlier this year.

So, check out DX’s list of the 10 most anticipated Hip Hop albums left in the calendar year.

Since deleting all of his Instagram posts in January and only supporting his fellow TDE label-mates on Twitter, ScHoolboy Q has been relatively quiet on social media. He’s been taking on guest features but has no singles of his own in 2018.

He already stated in a since-deleted Instagram video from September 2017 that his unnamed album was 90 percent complete. As far as the content on the album, his fans can expect a different side to Q, who told Zane Lowe it’ll showcase “the father, the dude that’s actually happy, the dude that doesn’t be in the hood just hanging out.”

Happy birthday to the bro @losangelesconfidential! Can’t thank you enough for the endless opportunities!! ?? forever grateful for the crazy chemistry we got! ? #bytheway #dreambuildprosper

This year has had a lot of headlines for The Game that don’t concern his music. He’s been arguing with controversial rapper Tekashi 6ix9ine, his father passed away in January, and he lost a $20-million lawsuit against Viacom.

But, there were glimmers of hope for Game fans when he announced he was looking for two interns to help finish his promised Westside Story album. So far, Game has hinted that Kendrick Lamar will be featured on what he’s been calling his “final” album, as well as beats from Dr. Dre.

We’ll see if Game takes DX’s advice on creating a classic album in 2018.

Now that Lil Wayne is free of his deal with Universal and Cash Money, his fans are hungrier than ever to get their hands on Tha Carter V, even going so far as to start hoaxes around its promotion (as seen in the image above).

But the likelihood of a new project this year is strong, even with Wayne teasing the release of the project at concerts and during interviews for years.

Wayne has given fans a taste of new material with his most recent releases Dedication 6 and Dedication 6: Reloaded, but sticking the landing on one of the most important albums of his career could help his case for being the GOAT.

After Gangsta Gibbs released his surprise Freddie project, fans have been wondering when his highly anticipated follow-up to Piñata with Madlib will drop. Titled Bandana, the new album was written by Gibbs in 2016 while he was in prison awaiting an eventual not-guilty verdict and composed of some beats by Madlib that were originally not used by Kanye West for his The Life Of Pablo album.

Although he recently said he wasn’t ready to put out the album yet, he told Zane Lowe back in a November 2017 interview he’s “just gon’ hit y’all out the blue” with the release.

Although we first heard of The Dime Trap in 2015 when Da’ Nic dropped, T.I. has kept the project under wraps for the most part. Then in April, he posted a video clip of a song with YFN Lucci that he promised will be on The Dime Trap.

Back in 2015, he described the album as an “unapologetically trap music returns kind of project” and also revealed he worked with Dr. Dre on some songs that could potentially land on the album.

In a new interview with HipHopDX, T.I. seemed energized for the release.

“My favorite is the next one,” he said. “The Dime Trap is coming soon … the music has been there man. I was just waiting on the right time.”

Talib Kweli and Mos Def (now known as Yasiin Bey) combined forces in 1998 to form Black Star. Since then, Hip Hop enthusiasts have been praying to the rap gods for a sequel. The stakes are high for the return of Black Star now that they seem to be in full reunion mode.

In 2011, they released two singles titled “You Already Knew” and “Fix Up” that were produced by Oh No and Madlib, respectively. Then in February of 2018, Bey announced that the new Black Star album would be produced by Madlib himself. But some doubt crept into the picture when Kweli admitted he didn’t know about the announcement until after the fact. At least progress is being made since Bey revealed that he recorded his first verse for the project already.

Since his prison release, Meek Mill has been dividing his time between interviews, fighting for prison reform and creating new music.

He recently shared his Legends Of The Summer EP, but later commented on DJ Akademiks’ Instagram post that it was only released because songs off it had leaked, explaining that he hadn’t planned on putting out new music until the album was complete.

A tweet Meek sent out with a link to a playlist containing his music and the note, “Follow that jawn too,” hints that it might be updated with new music soon.

Whenever the full-length hits the streets, fans can expect some production from Jahlil Beats.

Anderson .Paak had a phenomenal 2016 when he released Malibu and the Knxwledge-produced Yes Lawd! Since then, he’s been busy touring and contributing guest features to other albums, including the Black Panther soundtrack.

In an interview from February, .Paak said his next album was in the mixing phase and that Dr. Dre had a big hand in its creation. In May, Dr. Dre accidentally revealed the title of the album in an Instagram Live session on .Paak’s account.

So far, we’ve already heard the “Bubblin” single as well as “‘Til It’s Over,” which was featured in a Spike Jonze-directed Apple commercial featuring FKA twigs.

We’ve been hearing about Astroworld since the end of 2016, the name for which comes from a Six Flags amusement park in Houston that closed down in 2005.

Although details on Scott’s third album have been scant, in a recent interview with 032c, Scott revealed this album will be “a little weirder” and said, “The one thing I’ve done on this album is rapped more than I ever have. I want people to get to know Jacques, you know what I’m saying?”

FKi 1st also said on Instagram Live that he’s working on the sequel to “Drugs You Should Try It.”

This follows more news that Mike Dean, Sonny Digital and WondaGurl were working on new music with Scott.

Me laying here watching the #BEDVideo ???? can’t wait to share it w|you.

As the delayed release date for Queen approaches (August 10), a more complete picture of the album has taken shape. Of her four singles this year, three will be on the 19-track album (“Barbie Tingz” doesn’t appear on the pre-order). Minaj also released a video for “Bed” with Ariana Grande.

Upcoming tour partner Future has gone on the record to say that Queen is a “classic” while Minaj has previously described the sound on the album to be a return to boom bap as opposed to trap beats.

Whatever Minaj ends up delivering for the final product, expect both the Barbs and the haters to be in the mix when it drops.

What albums are you looking forward to? Let us know in the comments below.

And check out our the rest of DX’s Mid-Year Review, including Top Albums, Top Songs, Most Slept-On Albums, Best R&B and Best Videos.