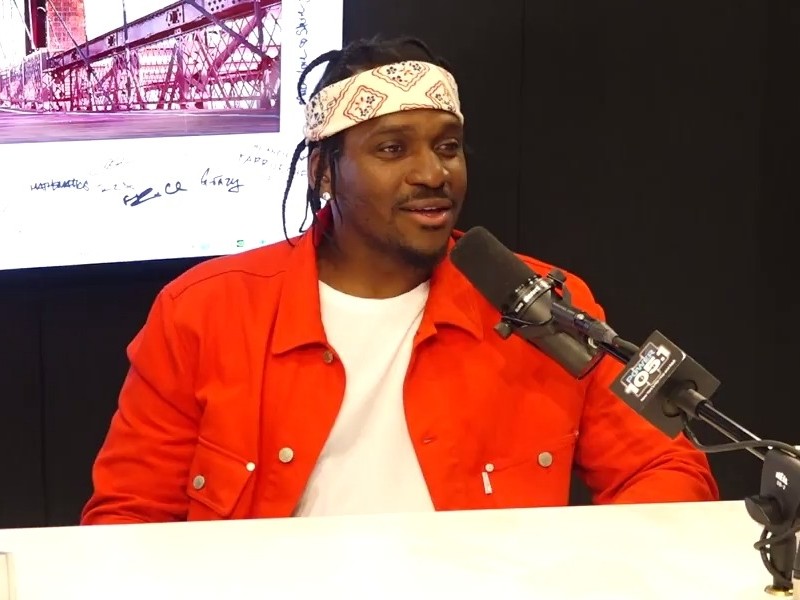 Pusha T just changed the title of his King Push album to DAYTONA, but a lot more has happened ahead of its upcoming release on Friday (May 25). Before his highly anticipated LP drops, the veteran MC stopped by The Angie Martinez Show to talk about the project and much more.

The G.O.O.D. Music president was an open book during the conversation, and HipHopDX has highlighted some of the biggest revelations from the interview.

Here’s the seven things we learned from Pusha’s sitdown with Martinez.

The devil is in the details…✊? #ForeverWakanda

“[Kanye] changed my artwork last night at 1 a.m. He wasn’t feeling it … The artwork, it was pictures that we all agreed on. He picked this photographer. I took these pictures. I was like, ‘Yo, these are fresh.’ We picked all of these pictures out. He had a little edit to it of how he wanted the actual grading of the picture to look. Picked the picture, we love it. Boom, boom, it’s good! 1 a.m. my phone rings. No caller ID. ‘Yo!’ ‘Hey yeah, I think we should change the artwork. I like this other artwork.’ Now, this is other artwork is $85,000. I said, ‘Hey, I don’t wanna pay for that, and I wasn’t even gonna ask you to pay for that. We picked what we picked. It’s here. It’s ready!’ ‘No, this what people need to see to go along with this music. I’ma pay for that.'”

Why Daytona Only Has Seven Songs

“It’s respecting your time. Getting straight to the point. No fluff. No filler.”

Why Meek Mill Isn’t On “What Would Meek Do?”

“It’s a record that I wanted Meek on. I really wanted him on it and when we did it, I was like, ‘Man, I gotta get him on it.’ And he was, of course, locked up. So, of course, it’s done and he comes outta jail. So, we’re speaking and I couldn’t even bring myself to asking him to get on this record ’cause I see him with his son. Me and his son have the same birthday. He’s fresh out. I’m not telling you to get on no record.”

He Doesn’t Talk Politics With Kanye

“It’s just another one of many things we disagree on. We disagree all the time … I’m totally against [Kanye’s support of Donald Trump]. I don’t even care what people say outside of us. I feel like that’s a harder thing to be around when we’re having these conversations and debates face-to-face. The prison reform thing is so near and dear to me, and it’s something that I know we can’t even tackle with Trump. So, there’s nothing that I even want to hear in regards to him, a point of view, anything. I’m cool. We’re at a loss already … I’m not just bringing up political conversations, and he knows not to bring up political conversations to me. It’s just not happening.”

#SwipeLeft: On today’s @TMZ_TV live #KanyeWest discussed how slavery was a choice, and how Trump is his BFF. #VanLathan had a few words for Kanye as well. Thoughts?

Kanye’s Album Is “Next Level”

“He’s definitely gonna show everybody that he’s always gonna be on the next level of music. That’s what he’s on right now … He’s speaking on a lot on this album. And I feel like he even speaks it clearer and messages it clearer and better through the music. That’s where you can see a bit of like, OK, you’re asking these questions. You’re saying these things to get this type of emotion or just get an answer for something else. I feel like it’s better there.”