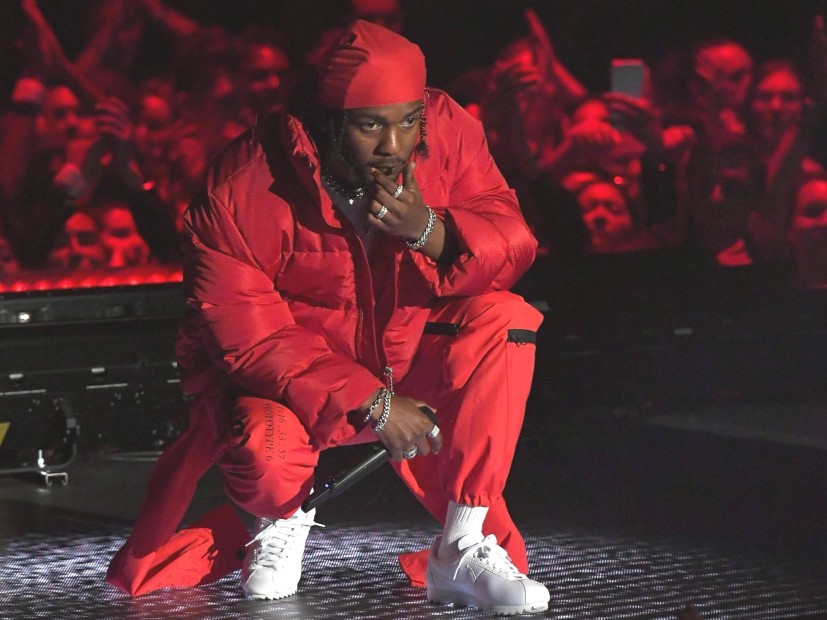 Kendrick Lamar has left his Reebok days behind him and jumped feet first into a new opportunity with Nike. On Monday (January 8), Kung Fu Kenny took to Instagram and shared a photo of the new Nike Cortez Kenny 1, which he debuted during his performance at the CFP National Championship Halftime Show Monday night.

With the album title “DAMN.” emblazoned in red across the all white shoe, and a black and red tongue, they match DAMN.‘s aesthetic.

DAMN., of course, is the title of Kenny’s critically acclaimed, Grammy nominated album, which also earned HipHopDX’s 2017 Album of the Year Award.

The Compton-born Hip Hop powerhouse apparently manifested this collaboration into existence. On Big Sean’s 2013 track “Control” featuring K. Dot and Jay Electronica, he essentially spit in the face of the materialism that runs rampant in the rap industry. Too often, seemingly endless stacks of cash, fancy cars and luxurious mansions take centerstage, and detract from the music itself, making it more about “things” than the actual art form.

In his verse, Lamar claimed “no more designer shit,” as a kind of “fuck you” to the materialistic bullshit. It’s something he evidently stuck to.

“I heard the barbershops be in great debates all the time/ ‘Bout who’s the best MC: Kendrick, Jigga, and Nas/ Eminem, André 3000; the rest of y’all/ New niggas just new niggas, don’t get involved/ And I ain’t rockin’ no more designer shit/ White T’s and Nike Cortez, this red Corvette’s anonymous,” he rapped.

Last month, Lamar posted another red, white and black version of the Kenny Cortez to his Instagram with the words “Don’t Trip” laying on top of the shoe and Japanese writing on the side.

Lamar’s preference for Nike over Tom Fords and plain White Ts over Gucci makes him even more relatable to his fans. He could be your homie next door still driving a Honda Accord. From the outside looking in, Kung Fu Kenny is more about substance than anything else, and that’s increasingly rare in the commercialized rap world.

The Nike Cortez Kenny 1s are available beginning January 26 and retail for $100.

Cop a pair here and revisit his “Control” verse above.