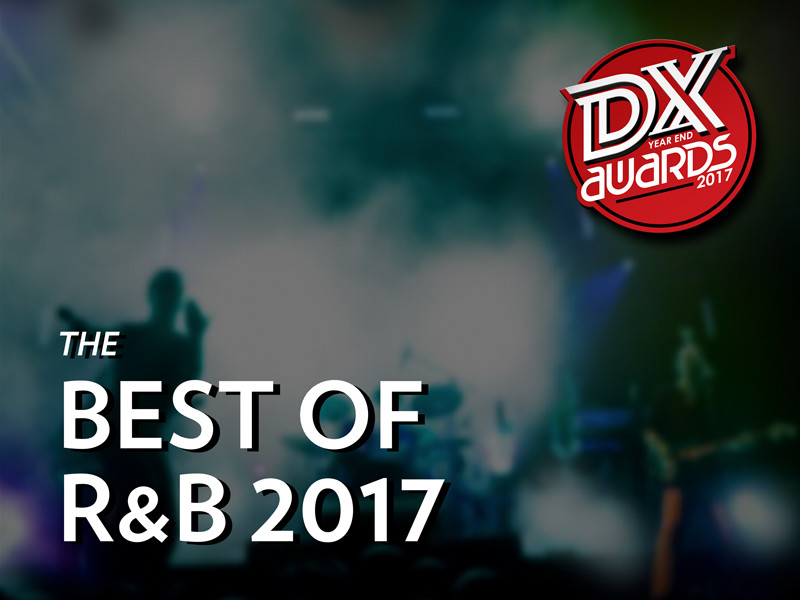 2017 signifies the genesis of a true R&B resurgence. The year was ushered in by audiophiles obsessed with the 1990s New Jack Swing sound fathered by Jimmy Jam and Terry Lewis, Teddy Riley and Babyface. And now, breakout artists such as SZA, Khalid, Kelela and Daniel Caesar are shape-shifting R&B to fit their experiences in a world filled with major social issues and self-absorbed beings addicted to Instagram likes.

Hip Hop and R&B are currently the most listened to genres on Apple Music and Spotify and comprise 25.1% of all music consumption in the United States, according to Forbes.

The 10 following albums certainly evoked melodic emotions this year and they did it extremely well, making for an impassioned soundtrack.

Here are HipHopDX’s Top 10 R&B Albums of the year.

Thundercat captured soul and funk in a mason jar to create a lasting concoction with Drunk. It’s the third album from the 33-year-old Los Angeles musician born Stephen Bruner and contains guest features from Michael McDonald, Kenny Loggins, Wiz Khalifa, Pharrell as well as some guy named Kendrick Lamar on the track “Walk On By.”

Drunk may have been a whopping 23 tracks deep, but each song flows into one another, managing to keep a blissfully weird groove going. It offers another piece of what he did for King Kunta on 2015’s To Pimp A Butterfly Grammy Award-winning song “These Walls.” He also reunited with Kendrick via his own project on DAMN.’s “Feel.”

The word “pure” comes to mind when discussing Sampha’s debut album, Process. The 29-year-old British singer incorporated the piano as a defense mechanism to relay his emotions throughout the 10-track LP. His velvety voice and soft-bated breaths demonstrated authenticity, evidenced by beautiful records like “Kora Sings,” “Blood On Me” and “Reverse Faults.”

The revealing “(No One Knows Me) Like The Piano” allowed listeners inside the musician’s South London State of Mind in a way that his features on Drake’s “Too Much” and Solange’s “Don’t Touch My Hair” didn’t. The project may not have gotten the massive recognition that some his peers’ have but Sampha’s Process got deep beneath the surface — and you can hear it.

Syd’s Fin can be considered an enchantment of sorts. Her soft and vibrant voice, mixed with empathetic vulnerability, put forth a project that fits the true ’90s aesthetic that was rampant throughout the year. Fin sees production from The Internet co-member Steve Lacy, as well as Melo-X, Hit-Boy and a string of other superstar producers. Songs like “Know” and “Body” help make this a “setting the mood” project, which was smooth, easy on the ears and naturally magnetic.

The invaluable X-factor here was how much replay value the project possessed, not to mention the influential sounds of R&B and trap-n-soul that were seamlessly packaged throughout.

Brent Faiyaz’s debut album Sonder Son is straight R&B, no chaser. Brent’s magical voice leads the vibe of Goldlink’s Grammy Award-nominated single “Crew,” and his own standout cut “Gang Over Love” reflects youthful exuberance, while “Talk 2 U” takes it back to the days of late-night slow jams on BET’s ’90s show Midnight Love.

If Washington, D.C. native Kelela’s goal was to transport listeners to a future era of R&B with Take Me Apart, consider it mission accomplished. Her single “LMK” captures that early ’90s feel à la Janet Jackson’s “Escapade” and nudges the sound of R&B to an ethereal realm. Each track on the album exercises relatable lyrical content that any person who has experienced painstaking vulnerability, romance, and love; as demonstrated by the lustful “Blue Light” and “Frontline.” The latter made a cameo on the second season of HBO’s hit series Insecure.

At the top of 2017, Kehlani hit the ground running with her debut album, SweetSexySavage. The 22-year-old sultry-voiced singer had just come off a Grammy Award nomination for Best Urban Contemporary Album for her critically-acclaimed albumixtape, You Should Be Here in 2016, and now she’s wrapping 2017 up with another Grammy nomination for Best R&B Performance for “Distraction.” SweetSexySavage procured two gold-selling records including “Distraction” and “CRZY,” as well as a HipHopDX review score of 4.1 (out of 5).

Daniel Caesar’s Grammy Award-nominated album Freudian pushes love to the forefront while bringing R&B back to the basics with a touch of gospel. Listeners sang hallelujah to tracks like “We Find Love/Blessed” — which took us to Sunday church service with its beautiful musical translation of pettiness — the Kali Uchi-featuring “Get You,” which showed a true appreciation for that four-letter-word, and “Best Part” with H.E.R. for another mind-blowing duet.

Freudian fueled sonic emotion that was commanded by Caesar’s full range of voice talent, and at 22 years old, this is only the beginning.

Miguel offers a singular formula of sex, love, drugs and politics on War and Leisure that ensures he rightfully stands out in his own musical lane. The use of mellow guitar riffs to complement his strong voice and wild vocal range solidifies War and Leisure as a must-listen. It debuted at #1 on the R&B/Hip Hop Album charts and pushed over 40,000 units. Songs such as “Banana Clip,” “Pineapple Skies” and “Come Over And Chill” (featuring frequent sidekick J. Cole) portray Miguel getting vocally creative.

War and Leisure is the album that didn’t conform to the norm.

Khalid was a true champion of youth culture throughout 2017. The 19-year-old Texas singer’s ’80s-inspired album, American Teen, produced the Billboard hit singles “Young Dumb & Broke” and “Location,” and became an instant classic for his generation. American Teen peaked at #1 on the Top R&B Albums chart while securing a platinum plaque for his efforts. Now, he’s nominated for five Grammy Awards including Best New Artist and Best Urban Contemporary Album.

Other 2K17 accolades include being featured on Calvin Harris’ “Rollin’” with Future and lending his vocals to Logic’s Suicide Prevention Awareness single “1-800-273-8255” along with Alessia Cara (which is also nominated for a Grammy Award).

Winner — R&B Album Of The Year

SZA’s Grammy Award-nominated Ctrl album offers something sonically pure to the emotions. It’s a refreshing take and relatable monologue of the female psyche that illustrates what she goes through, without apology, in musical form. As morally uncomfortable “The Weekend” seems to be (despite her clarifying several times the song is not about being the side chick), the honest, slow ballad begs to be sung as the lyrics of infidelity vibe perfectly off the production laid out by Memphis producer ThankGod4Cody.

Hot 100 hit “Love Galore” (alongside Travis Scott) was all over the radio this year, also nabbing a Grammy nomination for Best Rap/Sung Performance. Ctrl features more satisfying cuts such as “Supermodel,” “Garden (Say It Like That),” and “Go Gina” that progressively encourages you to be content in being yourself.

TDE should be proud.

And while we’re at it…

Winner — R&B Song Of The Year

SZA’s “Love Galore” featuring Travis Scott is such an incredibly, addictive number. Produced by Carter Lang, ThankGod4Cody and BG, “Love Galore” speaks to anyone who has ever been faced with the dilemma of succumbing to love in vain or simply walking away for your own sanity. Its super relatable hook, “Why you bother me when you know you don’t want me?” is a push and pull of allowing your time to be wasted by someone you adore.

No doubt, the TDE princess’ song-writing skills encompass the proficiency to grace the soul. The song’s visual has amassed over 39 million YouTube views since the end of April and the track was certified platinum in September.