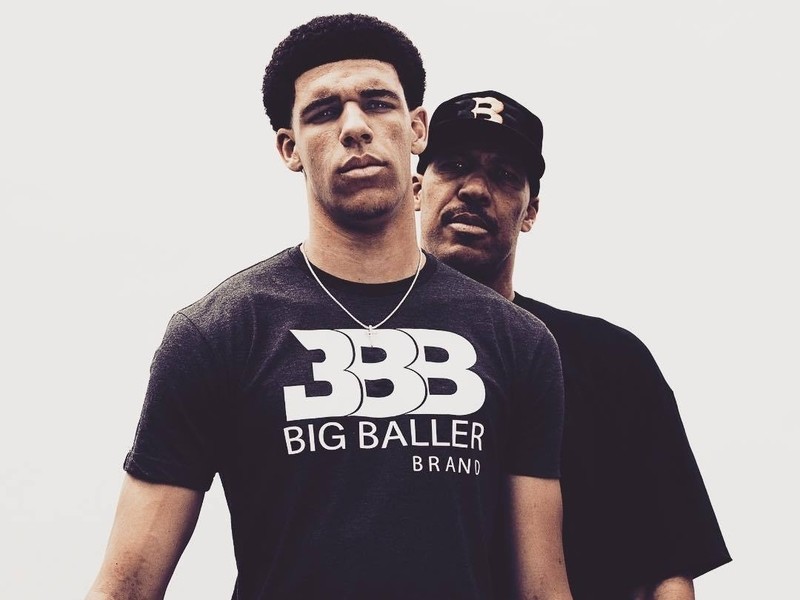 The No. 2 pick in this year’s NBA draft and new Los Angeles Lakers star has been stuck in the eye of the storm his father created around him since he reached national attention. To let LaVar Ball tell it, his son is already comparable to LeBron James and Michael Jordan. In fact, LaVar has gone so far as to say he would have beaten Michael Jordan in 1-on-1 back in the day. He also said that his son would sign for nothing less than $1 billion dollars over 10 years, and that he would only play for the Lakers.

Lonzo has been mostly quiet through all of this, but his father’s unbridled audacity has turned many against the 19-year-old. Lonzo only made things worse when he recently slammed Nas in favor of new-school rappers.

During the first episode of the reality series Ball in the Family, Lonzo’s family told him to listen to “real Hip Hop” (an arbitrary phrase, but we’ll get to that).

“That’s not gonna happen,” he responded. “Y’all outdated, man. Don’t nobody listen to Nas no more. Real Hip Hop is Migos and Future.”

Let’s get this out of the way; Lonzo’s comments are asinine. One might think that since he enjoys rapping — there are plenty of videos as proof online — that he might have taken an interest in the genre’s past, and be respectful to its legends. But for those who don’t know, apparently including Lonzo, Nas is considered by many to be the greatest rapper of all time.

He doesn’t attract attention like he used to, but DJ Khaled, one of rap’s most prolific and popular personalities, set aside a song for Nasty Nas on last year’s Major Key. Its title? “Nas Album Done.” That’s right; Khaled set aside an entire track to notify the world that Nas had a new album coming, and the internet was ablaze with excitement and speculation. So, no, Nas is not outdated and people still listen to him.

What Lonzo should have said, and possibly meant, is that nobody from his generation listens to Nas. And for the most part, he’s right. The kids listen to pop rap, trap and mumble rap. Lil Uzi Vert, Lil Yachty, and, as Lonzo said, Future and Migos dominate their earbuds. I recently spoke to a kid who told me as much. I was in Pittsburgh last week talking to a student at Carnegie Mellon University. The conversation turned to Hip Hop and he brought up Lil Uzi Vert’s Luv Is Rage 2.

“Nobody cares about lyrics anymore,” he said. “It’s all about entertainment.”

It’s a sentiment echoed by student-athletes I used to interview and converse with as a sports writer in Indiana. Trap rappers are their norm and Drake is their pop superhero. J. Cole and Kendrick Lamar are their badges of honor to display proudly when old heads criticize their musical preferences. Songs like Fetty Wap’s “Trap Queen” are the realest to them. To be clear, the term “real Hip Hop” is as ridiculous as “fake news.” As opposed to what, fake Hip Hop? The genre has many different sub-genres, styles and sounds that fall under rap’s massive umbrella. One isn’t any more or less authentic than the others. The latest sounds are simply what these kids identify with most.

Lonzo may have all eyez on him in the City of Angels, but he’s still just 19-years-old. Sure, Hip Hop’s past is more accessible than ever before with streaming services like Spotify, Apple Music and TIDAL. However, the constant barrage of new music means most listeners aren’t likely to search beyond what’s in front of them. They’ve been conditioned by what they hear on the radio or at parties. This is their sound, and it’s comfortable. Past generations are no different. I’m 26 and recognize the 90s were Hip Hop’s strongest period. But, my favorite rap comes from the 2000s because I prefer the chipmunk soul and early trap beats. There’s nothing wrong with that, just like there’s nothing wrong with kids enjoying “Mask Off” more than “The World Is Yours.”

The hoops prodigy’s comments don’t affect Nas negatively. In fact, it may only spur his loyal fan base to support him with more gusto when his album, rumored to drop this year, finally arrives. Lonzo’s comments might even pique the interests of younger heads and make them check out this old dude named Nas.

Many Hip Hop fans and artists have attacked Lonzo for his comments. Nas’ manager even said Nas has never heard of Lonzo. But Nas himself hasn’t spoken about it and doesn’t seem to be sweating it. So if QB’s Finest isn’t worried, we shouldn’t be either. Ease up on Lonzo.