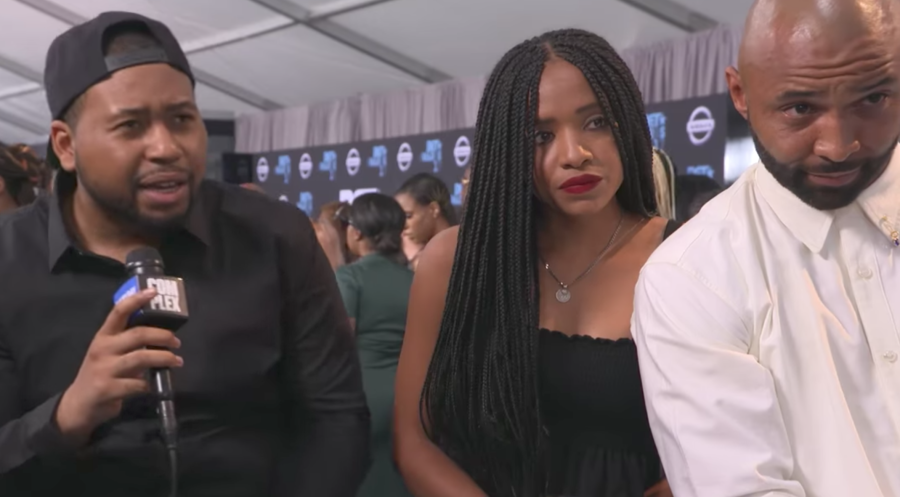 In my 10-plus years of interviewing artists, I’ve had some great conversations. I made the ever-stoic Killah Priest burst out laughing when I asked him whether the new HRSMN project would arrive before Dr. Dre’s Detox. (For the record, it hasn’t.) I had Big Boi begrudgingly tell me he favors ATLiens over Aquemini. LL Cool J for Exit 13 promo ranks high for me. And, of course, I talk to Snoop Dogg every chance I get because there’s no shortage of knowledge that comes from those discussions.

I’m sure every Hip Hop scribe remembers their first interview like a professional athlete putting their first point on the board — it’s a rite of passage that often goes on to become a learning curve for deeper and better angles. (Mine was Hell Rell about a decade ago after he and Duke Da God were arrested in Ohio.) To be honest, I think I’ve only had one “bad” interview. An interview I never took personally considering who the subject was.

Seeing Joe Budden walk off the Everyday Struggle BET Awards interview that propelled the brief (but testy) WWE Rap moment gave me an instant flashback to when the always outspoken MC deemed it unnecessary to stick around while I was speaking to him and the rest of Slaughterhouse.

The year was 2011 during SXSW at Vibe’s then-revered Vibehouse, which was often powered by Cashmere Agency. (That Sway Calloway intro from Welcome to: Our House‘s “Die” happened that night.) Just weeks prior, it was announced that Budden, Royce Da 5’9, Joell Ortiz and Crooked I had joined forces with Eminem’s Shady Records to save commercial Hip Hop from the fourth level of Auto-Tune hell (or something). So there was a lot to talk about, considering the anticipation and pressure. I was the Managing Editor for The Smoking Section at the time and was joined by a couple of trusty TSS Crew members in Marshall Ziglar and Ben “Beware” Bowdon. We didn’t have our own press activation but we had exceptional access within the venue and were able to easily grab artists for interviews.

After speaking with Slaughterhouse’s manager, Crystal Isaacs, I secured some facetime with the newly signed supergroup following their performance, and we patiently waited. After they rocked the stage, I saw them enthusiastically walking down the corridor — only to be snatched into the press room operated by Vibe employees.

We patiently waited some more and after 20 minutes or so, an exhausted yet excited Slaughterhouse came out of the room. See, there was a strip club event a publicist friend of mine was throwing and I overheard Joe exclaiming how eager he was to crash. Anyone who’s ever pounded the pavement at SXSW knows travel can eat up your energy/budget so I didn’t have the bandwidth to make it out there. But there was a bigger issue on hand. Crystal told the camp they had “a Smoking Section interview” to knock out before they could help pay some tuition, to which Joe responded, “We just did a Smoking Section interview,” while pointing his thumb to the room behind him. And that’s when I flagged them over like, “Hey, we’re the Smoking Section over here.” And the look on his face was something like a kid who had to wait till December 26 to play with his toys because his parents forgot the C batteries — pure dejection. And I felt him.

That press room was definitely a few degrees warmer than any other area in the building and if I was an artist, I wouldn’t want to talk hypotheticals about an album that wasn’t even finished yet either. (Which is why I always nudge managers and publicists to do interviews on the publication’s time. Press days suck and regurgitation of answers — hell, even outfits for video interviews — is a common theme.)

But hey, you get the scoop when you can and we all went to the back alley to conduct the interview. I like to keep them succinct for clarity/editing purposes but even with my efforts, Joe wasn’t having it. The other three members were cool and receptive but Mr. Mood Muzik accused me of asking “bullshit” questions, to which I snapped back and pointed out how he wasn’t even listening to what I was saying. Immediately after that exchange, Joe made it a point to detach himself from the interview and walk through the alley as Beware filmed the entire ordeal with his camcorder. Crooked chuckled in the back as Royce and Joell breezed through the questions. I didn’t give Joe the satisfaction by breaking stride and calmly wrapped it up.

I’d be lying if I say I didn’t take a slight jab to the ego after that. After all, I had personally vouched for the man’s career since it started. Whether it was physically copping his self-titled Def Jam debut or ensuring we put Halfway House in the top albums of 2008 (which happened to be the origin of Slaughterhouse) to approving all the cool Mood Muzik articles Justin Tinsley used to write, I always wanted to give shine to the dope MC regardless of how industry politics were conducted.

I had heard stories about him prior to that (just like you can hear stories about any individual who can attract the common cold), so I didn’t take it personally much longer than that evening. But the true validation came when I asked Royce and Joell if I had really conducted a bad interview. Nickel Nine simply told me “Nah” with a shake of his head and Joell put his hands on my shoulders and said, “My brother! Read between the lines!”

I know Beware still has the footage from that interview but I never pressed him for it. Whatever propelled Joe to rush 2017’s hottest rap group off the stage has always been in him. A common criticism for our rap heroes is that they often change up as their career progresses … or regresses. But we can’t say that about Joe.

Much love to everyone with a hand in making Everyday Struggle. The stock of popcorn should be a hot commodity by the end of the year.