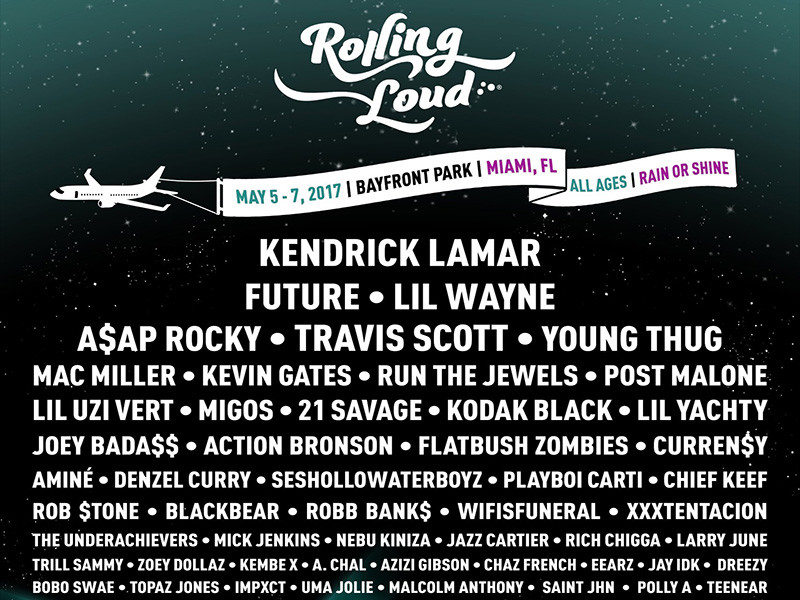 Is This Year’s Rolling Loud Lineup The Best Hip Hop Festival In 10 Years?

Sure, there are massive artists that head out on tour and pack a stadium multiple nights in a row — just like Drake did with five consecutive performances at London’s O2 Arena — but that’s obviously (mostly) a one-man show. There are also a few longstanding music festivals like Bonnaroo, Osheaga, Governors Ball, Lollapalooza and Coachella that have all placed notable rap acts on the bill over the years, but the majority of these festivals aren’t looking to totally stack their lineups with rappers.

So what are you supposed to do when you want to see big rap names perform live without all that mind-numbing dance music or pickup truck talk in between? Well, this year’s answer would be Miami’s Rolling Loud Festival.

The recently released lineup features most of 2016’s hottest rappers with Kendrick Lamar, Future and Lil Wayne all sitting at the top of the bill. There is a grand total of 51 acts spread across three days (May 5-7) in Miami’s downtown Bayfront Park, all of which are strictly rap. Large-font supporting acts include A$AP Rocky, Travis Scott, Young Thug, Mac Miller, Tyler The Creator, Kevin Gates, Post Malone, Lil Uzi Vert, Migos, 21 Savage, Kodak Black, Run The Jewels and Lil Yachty. Even the smaller-font artists like Joy Bada$$, Jay IDK, Jazz Cartier and Mick Jenkins had banner years in 2016, which begs the question: is this the most well-rounded, exciting and culturally relevant Hip Hop festival in recent memory?

If you grew up on early 2000s Lil Wayne mixtapes, had “Fuckin Problems” on repeat five years ago and now pay close attention to internet rap, then yes, this is the ultimate Hip Hop festival for you.

There’s no denying the festival’s emphasis on booking hot, contemporary youngsters who may not have a giant catalogue to run through, but in an age where many festival set lengths (and attention spans) don’t exceed 30 minutes, having quick spurts of high energy hits from a bubbling artists of today is a total bullseye.

The other bonus to consider with Rolling Loud’s lineup is its deep diversity. At first glance, trap rappers reign supreme throughout the bill — even fanny pack bad boy Rich Chigga got a spot — but if you go line for line you can see that even your favorite “conscious” and “lyrical” rappers made the cut too. Action Bronson, Joey Bada$$, Flatbush Zombies and Curren$y are among those who don’t resort to dabbing and trap drums to keep them popping. So if the likes of Playboi Carti, Chief Keef and Robb Bank$ aren’t your cup of lean, then you still have plenty of more traditional MCs to bob your head to. Also, don’t forget that the most #woke of all, Kendrick Lamar, sits at the very top of the list.

There are, however, a few notable and truly authentic Hip Hop festivals from the past few years that would definitely give Rolling Loud a run for its money. Paid Dues and A3C have both featured incredible lineups over the years. Rock The Bells was a festival force to be reckoned with in the mid 2000s — not so much for being a contemporary classic but for bringing what most refer to as “real Hip Hop” to the live stage.

Their 2004, 2005 and 2006 lineups were undoubtedly impressive but their two-day festival lineup at Randall’s Island in New York City was basically a “real Hip Hop” head’s dream come true. Headlined by Wu-Tang Clan, Public Enemy, Cypress Hill, Rakim, Mos Def, The Roots and Talib Kweli, this RTB festival was the truly a mecca in rap’s motherland (even with reunited Los Angeles rap/rock group Rage Against The Machine getting the top billing on the flyer). Even the supporting acts were legends in their own right with UGK, EPMD and Immortal Technique all blessing the Guerilla Union Main Stage.

From an attendance standpoint, Rock The Bells surpasses Rolling Loud’s two previous inaugural years combined. RTB packed in 35,000 avid fans into Randall’s Island while Miami’s Bayfront Park only needed to hold Rolling Loud’s 6,000 attendees in 2015 and 15,000 in 2016.  But of course those two lineups didn’t have anything close to this year’s.

At the end of the day, the triumphant festival boils down to what generation you’re from and your personal preference – just like everything else in the realm of Hip-Hop debate. Rolling Loud will obviously be one of the hottest tickets of the year and if bills like this continue to drop every year then the festival itself could very well be on its way to becoming a staple in Hip Hop culture.