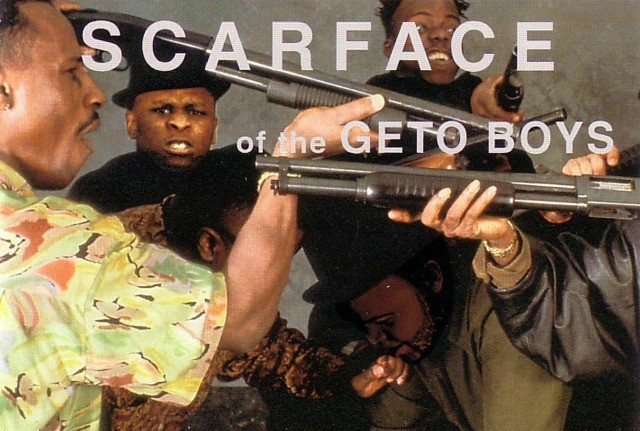 Despite collaborations with Hip Hop luminaries like Tupac, Dr. Dre, and Jay Z, a dedicated fan list that includes Chris Rock and Mike Judge, and an impressive discography in both quantity and quality, Scarface never quite seems to get his due. Conversations about the Rap GOAT often neglect to mention him, even though his consistency and output far exceeds many of his more-heralded East and West coast peers. Few people outside of his diehard fanbase are aware of his production abilities, which include producing Devin The Dude’s first album as well as the majority of his own debut. Yet, when the recognition has come on a larger scale, Scarface hasn’t always seemed comfortable with it all the same. After receiving the 2015 I Am Hip Hop award from BET, Scarface concluded his speech by telling the audience and fellow artists, “I ain’t shit without y’all.” Despite his humility, Scarface’s catalog has had a profound influence on rap music, whether people realize it or not. His career as a solo artist started 25 years ago when his debut Mr. Scarface is Back elevated storytelling in rap, helped put Houston’s Rap-A-Lot Records on the map, and marked the beginning of a consistent and prolific career in the music industry.

It’s impossible to talk about Scarface’s debut without first acknowledging the infamous cover, which features multiple ready-to-fire shotguns and a coke deal gone bad. While some may find the cover to be in poor taste or sensationalist, the imagery was a reflection of what was going on in Scarface’s universe at the time. In songs like “P.D. Roll ‘Em,” he analyzes people in his neighborhood walking around in a drugged-out stupor and asking for money, admitting “My own hood is confusing me. Shit just ain’t what it used to be.” And while he is critical of drug use in the song, Face had a very real connection to hard drugs at that time. In an interview with the website Da Shelter, he revealed that the coke on the table in his album cover was indeed flour, but admitted had it been authentic, his street roots would have gotten the best of him.

“I was so reckless back then that at 19-year-old I know I would have taken that coke and sold it.” This sentiment was repeated in a 2013 interview with Complex where he admitted, “We were selling rocks man. That’s about as much information as I can give you.”

“Every time I approach a song. I always try to write an intro, the body, the climax, and then the ending.” — Scarface

Beyond serving as a reflection of the drug-filled reality a young Scarface was living in, the album cover also signified the turmoil within the Geto Boys. After the breakout success of their album We Can’t Be Stopped, which was released in July of 1991 and on its way to going platinum thanks to “Mind Playing Tricks on Me,” group member Willie D left the group to pursue a solo career. DJ Ready Red, whose face was drawn over because of a feud with Rap-A-Lot founder J Prince, left the group just before the release of We Can’t Be Stopped because of dissatisfaction with his compensation. With the Geto Boys’ future cloudy, Scarface was left with few alternatives outside of paving his own way. As he explained to Noisey in 2015, “I didn’t have another choice. Willie left the group, so I had to do a solo album.”

Hollerin’: The video for “A Minute to Pray and a Second to Die” showcased ghetto reality after the lyrics already set the stage perfectly.

If “My Mind Playing Tricks on Me” and We Can’t Be Stopped made people take notice of Brad Jordan, Mr. Scarface is Back grabbed people’s attention by the throat and refused to let go. Dark, violent, and at times misogynistic, the album also gives us an intimate peek into the mind of someone who is wrestling with inner demons that threaten to consume them. Beyond conveying his complex and dark inner emotions, Scarface cemented his reputation as a first-rate storyteller capable of painting vivid pictures for listeners with songs like “A Minute to Pray and a Second to Die.” When breaking down the song for Complex, Scarface said, “Every time I approach a song. I always try to write an intro, the body, the climax, and then the ending.” Face uses his expert story structure to lay out the tale of a young man named Jay who is shot in a drive-by, survives and then goes on a murderous, revenge-fueled rampage after recovering.

At the beginning of the song, Face calls Jay a boy and describes his screams as he falls to the ground, telling the listener, “You shoulda seen him, he was scared.” This creates sympathy for Jay and makes use feel conflicted when Scarface describes his disgusting retaliations later in the song. After Jay murders his attacker’s brother and mother, Jay’s brother evokes the listener’s shock by asking, “‘Why you do it? Why you shot his moms Jay?’” Jay’s maniacal “‘Hehehehehe.. ha man fuck that bitch’” response resembles something out of a horror movie.

We then get the sense there is only one way out for Jay, and it’s no surprise when the song concludes with his violent demise, Scarface’s voice and lyrics indicate dismay and sadness at his death. “That’s how it happens in the acre,” he says, noting how cavalier both residents and the media are about the death of young black men, letting us know Jay’s killing will be reported in the newspaper as “One nigga died in the park (South Park).” The complex emotional stew Face uses in “A Minute to Pray and a Second to Die” is the work of a seasoned writer and puts Scarface in an elite class. As Black Jesus actor Slink Johnson aptly put in an interview, Scarface “broke being a killer down on a human level. He humanized the killer on wax.”

“I didn’t have another choice. Willie [D] left the group, so I had to do a solo album.” — Scarface

Although Face was capable of being more soft-spoken and reflective on songs like “A Minute to Pray and a Second to Die,” much of the album is told from the perspective of a conflicted perpetrator of the violence happening in Houston. The listener can tell Face was suffering at the time, and in a sense, perhaps he wanted us to suffer with him. The beginning of the album’s opening track, “Mr. Scarface,” starts with a devious interpolation of “The Itsy Bitsy Spider” with Scarface singing about gunning down the crack fiends who robbed him. With a voice that The Rap Yearbook author Shea Serrano once described as “a baritone sledgehammer,” Face spits lyrics throughout the album like, “I don’t love me/how the fuck am I gonna love you” and “My dad said, ‘Always look a man in the eye before you kill him.’” This bleak — sometimes nihilistic — sense of realism helps Scarface tell the tale of a different time in America and a different time for Houston.

Face acted as an observer and reporter, relaying tales of desperation, poverty, and violence from a city whose murder rate was nearly double what it is today and had the dubious distinction of being the murder capital of the country a decade before the album’s release. When speaking to the influence of Houston’s 5th Ward on early Rap-A-Lot releases like Mr. Scarface is Back, label founder J Prince told NPR, “We were only holding a mirror up to things that we had lived through in our surroundings, which are the same [things] that exist in ghettos around the world.”

In addition to holding a proverbial mirror up to his surroundings, Scarface also looked himself in the mirror for some painful introspection. Face has admitted to suffering from depression and mental illness for much of his life and has attempted suicide several times. We can see this depressed outlook on songs like “Diary of a Madman” and “I’m Dead,” a predecessor to Biggie’s “Suicidal Thoughts.” In “Diary of a Madman,” (which Scarface understandably calls “one of the deepest songs that I’ve ever written”) we hear the distressed of a young, isolated Face feeling like he has nobody in the world to talk to. After describing a failed attempt to solicit advice and help from his father, Face seems ready to give up on this world, rapping “Too many motherfucking questions, and not enough answers. Ain’t no use in trying. We might as well face it, we were all born dying.” On “I’m Dead,” he takes it a step further and talks about being trapped amongst the living after meeting an untimely end. Influenced by Ganksta N-I-P rapping “I’m dead” on one of his songs, Face decided to tell an entire story from the perspective of a dead man. Listeners get another dose of Face’s matter-of-fact outlook on death as he tells us, “You rarely see a nigga kill another nigga and he doesn’t mean it. So that’s the way I took it. Anyway, the boy is dead, no matter how you look at it. And life goes on…”

“We were only holding a mirror up to things that we had lived through in our surroundings, which are the same [things] that exist in ghettos around the world.” — J. Prince

The album is also notable for strong production values, handled mostly by Scarface, with the exception of “Born Killer,” “I’m Dead” and “Mr. Scarface,” which were derived from the minds of Crazy C and Bido. Though people may not realize it, Scarface is an avid Pink Floyd fan and gifted musician himself, who can play several instruments. The beats are strong and consistent throughout, working as a perfect compliment for Scarface’s style. He flexes his musical skills on tracks like “Murder By Reason of Insanity,” which does an expert job mixing traditional drum breaks, head-nodding funk snippets, scratched vocal samples, and a horn riff for the chorus. The instrument-for-chorus choice is interesting, as the Geto Boys “My Mind Playing Tricks on Me” was notable just a few months earlier for using the same tactic. “P D Roll ‘Em” sees Scarface melding shrill sirens with hard-hitting drums and a minimalist sample to create the perfect backdrop of his descriptions of the madness around him. As The Source said in their 4-mic review of the album, the combination of varied and layered production with Scarface’s lyrics will “make your speakers bleed.”

Despite being released on an up-and-coming southern independent label and the relentlessly dark and violent lyrical content,Mr. Scarface is Back managed to garner positive reviews from publications like Entertainment Weekly and according to Face himself, went on to obtain a Gold certification in a matter of weeks after its release. The success of Scarface’s work with the Geto Boys and his solo album would help put Houston on the map and make Rap-A-Lot a household name in the south. Though younger fans have never heard of the album before, it also influenced the content and style of many top-tier rappers. As Chris Rock would later say of the album, “Everything Biggie did, everything ‘Pac did, everything Jay-Z does was originally done on the first Scarface album.” Though the misogyny and violence in the album may alienate fans of more positive rappers of today, Mr. Scarface is Back deserves to be celebrated as it turns a quarter-of-a-century old.

Only a magnificent rap performance could handily expose the rest of the country to the happenings of Houston’s 5th Ward and help bring complexity and empathy to songs about drugs, murder, and violence. It remains one of the crown jewels of the Rap-A-Lot catalog and one of the best albums of Scarface’s storied career.