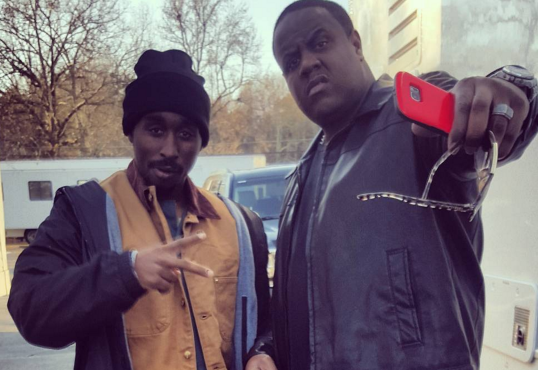 Can Tupac Biopic "All Eyez On Me" Live Up To "Straight Outta Compton"?

Yesterday (June 16) should have been the 45th birthday of slain Hip Hop icon Tupac Amaru Shakur. We all know the story that’s been memorialized — and romanticized — in pop-culture history. However, there’s yet to be a definitive cinematic adaptation Pac’s life. From director’s dropping in and out to issues with the legendary rapper’s estate, it never seemed like the day would come to see a depiction of him on the silver screen. After a decade of setbacks, principal photography for the Benny Boom-directed Tupac biopic All Eyez on Me concluded earlier this year and now, fans were in for a surprise when a one minute trailer hit the web. The film stars newcomer Demetrius Shipp as the former Death Row artist, The Walking Dead’s Danai Gurira as his mother Afeni Shakur and even has Jamal “Gravy” Woolard portraying The Notorious B.I.G. again. Could this teaser wet the appetites of Tupac fans? HipHopDX Managing Editor Trent Clark, Senior Features Writer Ural Garrett and Social Media Manager Sparkle Pratt give their thoughts.

Trent: I liked what I saw from the teaser trailer. (The fact that it wasn’t pumped on any official studio YouTube trailers allows me to know it was a very rough feeler for the general public.) I liked The Game’s reaction. Ironically, I was just listening to “Never Can Say Goodbye” [from LAX] where Game channeled the deathbed spirit of Pac rather convincingly and if he can give the film such a positive co-sign, I don’t have to be cynical leading up to the film’s release.

Additionally, I think the film will undoubtedly do well (barring a slanderous Twitter campaign that repels everyone from supporting at the theaters) simply because of who the film is centered around.

However, as a critic, I think perfection shouldn’t be a goal, it should be mandatory in this instance. This film has had more false starts than the entire AFC South last year and Pac’s accomplished so much in little time, omitting one key aspect (or lightly skimming over it) would totally derail the story for many fans. Straight Outta Compton cast a long shadow, too. The pressure may be on to expedite its delivery into theaters and we have two key dates to pencil in on our calendars: September 13, the day he ultimately died after being shot and November 5, the release of The Don Killuminati: The 7 Day Theory.

Ural Garrett: With every new director involved, my anticipation for All Eyez On Me became less and less. John Singleton and Antoine Fuqua were the best choice at first before they dropped out. I started worrying when Carl Franklin, whose only good film is Devil in a Blue Dress, was cast before whatever happened there. I really started worrying when Benny Boom officially locked in the gig. Hell, we all know how horrible Next Day Air was. Boom has made some of the best rap music videos of all time, but feature length films don’t seem to be his forte. The actors involved from Gurira and Shipp seem like good choices though the trailer cleverly left any actual acting out besides voiceovers. Right now, on a scale from Straight Outta Compton(Best) to Nina, this is looking to sit right in the middle. Also, that logo is trash.

Sparkle Pratt: A Tupac biopic is something we’ve all been waiting for. There have been hints for years but no concrete evidence that one was in the making. Finally, we get word that they are casting for a Tupac look-alike and at the moment we realized, it’s real. The cast was chosen and BTS pictures began to surface. The excitement is high because there is no way they should mess this up when his mother Afeni Shakur worked side by side with the director right? Well, after watching this Tupac’s “All Eyez on Me” trailer, personally I just wasn’t impressed. Not by the actors per se, but with the trailer itself. It didn’t leave me wanted more, it didn’t leave me saying “I can’t wait to see that shit.” It just felt like the makings of one of those low-budget black films that would live on BET or go straight to Netflix. It was actually boring as fuck. Am I over wanting a Tupac biopic or was the trailer just THAT underwhelming? I mean Afeni’s voicing through the trailer was powerful and all but, I wanted more for my 60 seconds. Maybe I’m asking for too much. Maybe my expectations are just too high. We shall see when the biopic drops.