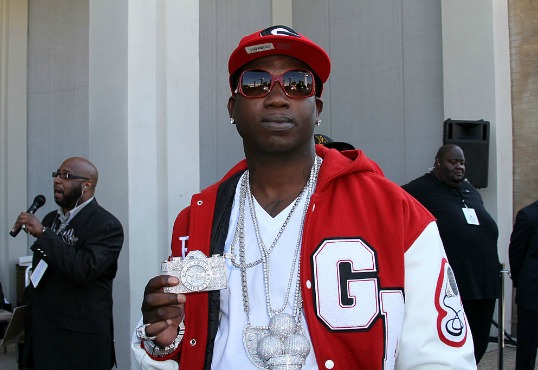 He wasn’t even free for a full 24 hours and Gucci Mane managed to make “First Day Out Tha Feds” quite a first post-prison impression with nearly two million streams. Even the production from Mike WiLL Made It was spot on. Alongside having a lengthy music catalogue that rivaled the likes of Tupac and Lil Wayne, Guwop was known for his collaboration with just about anyone. Looking back, he could be considered one of the primary reasons for solidifying Atlanta’s place as a rap hub. However, this also extended to far beyond The A.

We already gave you his best visuals, so here are ten of the most interesting collaborations of Gucci’s career so far.

Project: Beam Me Up Scotty

Gucci and Nicki Minaj’s relationship went south following some tweets claiming a sexual relationship before he got locked up in 2013. Quite a shame too. Minaj’s breakout mixtape Beam Me Up Scotty featured the Gucci Mane assisted highlight “Slumber Party.” At the time, both shared the same manager in Debra Antney who is also Wacka Flocka’s mother.

Who could have predicted that an unknown signed to 1017 Records would become such a popular, yet controversial figure within Hip Hop? Looks like Gucci Mane was on to something when he took on Young Thug fairly early and “Breakdance” is one of the earliest examples. Outside of being an artist, latching on to Thugger first proved Guwop’s ability to scout talent.

Project: Diary of a Trap God

One of the more left-field collaborations on the list, “Pussy Wet” came through Gucci’s relationship with Harmony Korine, the director of Spring Breakers. The cult favorite also started the rapper alongside the likes of James Franco and Selena Gomez. Hearing the legendary shock rocker go back-and-forth with The Machine is fascinating, to say the least.

Project: Back to the Traphouse

There isn’t a Gucci Mane track that’s become as memorable as “I Might Be” a.k.a. “Pillz.” The Back to the Traphouse classic features a strong armed guest verse from The Game with Shawnna tackling the catchy hook.

Project: The State vs. Rodric Davis

As his highest charting Billboard single, “Wasted” was the official soundtrack to any alcohol (and possibly drugs) fueled celebration during its reign. Before he set Instagram on fire with Sweet Pwussy Satday, the track is one of Plies last hurrahs before fading more into the mixtape and social media game.

808 Mafia laid the perfect beat for Gucci and Rick Ross to spit about their favorite subject title. Ironically, Guwop made a reference to El Chapo before the famous Mexican drug lord became the talking point of current American pop culture.

Chief Keef has been very honest about his love of Gucci Mane. The two have collaborated enough times and made the ratchet favorite Big Gucci Sosa. For “Semi Auto,” Sosa’s delivery is actually a lot better than the slurred rock vocals he’s known for.

“Can’t Turn Me Down” f. Future

Yes, Future Hendrix has a collaborative project with Gucci that dropped summer of 2011. Before the “Commas” rapper was hobnobbing with Ciara, Drake and the likes, Gucci was one of the first to show support for the Dungeon Family alum. “Can’t Turn Me Down” is a great example of the strength of the joint effort.

Project: Writings on the Wall 2

It’s too bad both of these superstars couldn’t come together for an official video because “Recently” is a great example of what Gucci can do lyrically, but it’s one of the better guest features from 50 Cent. It’ll be interesting to see the two collaborate in the future.

The rollercoaster friendship between Gucci and Waka Flocka has cooled down over the years, but Ferrari Boyz was released at a time where both served as the turn-up kings from their city. Completed in two weeks, the titular track is a Drumma Boy produced headsmack of an opener.

Alongside Young Thug, Gucci was quick to associate himself with Migos before their breakout hit “Versace.” Matter of fact, he was a fan of the trio before local hit “Bando.” For “Jackie Chan,” they use the famed action star as a reference point to their extravagant lifestyle.