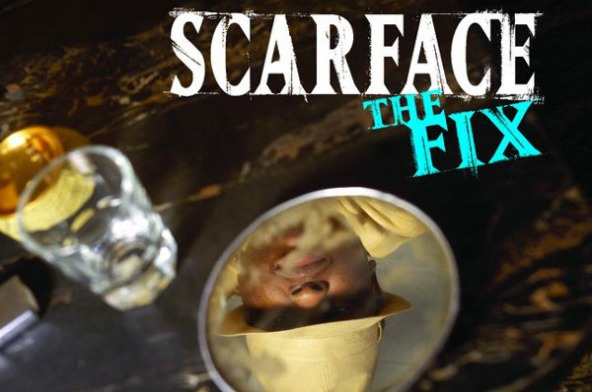 The stage is nearly set for this year’s ultimate college basketball war at the NRG Stadium in Houston, Texas where four teams will compete for the National Championship. Inside the #DXHQ, a different war is brewing—more like a healthy argument of Hip Hop bests.

While talking about Houston, a conversation about the best rap albums sprung up, hence the list below. For all inclusive purposes, we decided to put a cap on Scarface-supported material. Yes, he’s obviously one of the G.O.A.T.s and could easily cover the more than half of this list so we dove into this discussion objectively while considering the other incredible contributions artists made to one of rap’s underrated Mecca’s.

Take a look at the 16 best Houston rap albums ever created. Let us know what you add or subtract in the comment section and scroll down to the bottom to cast your votes for the projects. We’ll be back with the Final Four based on your votes.

By the time Scarface’s released his third solo studio album The Diary, all the drama regarding the Geto Boys were in his rearview. However, that didn’t stop him from paying homage to his storied past with “My Mind’s Playing Tricks On Me 94.” History would transform “No Tears” from emotional album cut to iconic show of irony during the opening scene of Mike Judge’s corporate comedy Office Space. The Diary was also an early indicator of his ability to reach outside of Houston through the Ice Cube-assisted “Hand of the Dead Body” also featuring Devin The Dude. Even lyrics like “David Duke got a shotgun, so why I can’t have one” proved exactly why Scarface is regarded as the city’s best lyricist bar-for-bar.

“Hey motherfucker, it’s me again, yep / The one who fucked your sister, but quiet as kept / Because she burnt me but instead of cussin’ out the bitch / But just didn’t tell her then I let her suck the puss out of my dick…” Jeezy… has there ever been a more crass way to open a song (“Mo Fa Me”)? Devin’s debut album The Dude spills raunchy narratives over soulful beats and skeletal harmonies. This dark yet comedic look into the life of Devin Copeland is an unquestioned Hip Hop classic.

When 1994 rolled around, Houston’s Rap scene was dominated by the Gangster Rap popularized and inspired by the Geto Boys. But hometown powerhouse Rap-A-Lot Records flipped its own game with the release of Fadanuf Fa Erybody!! The comedic sex and reefer-themed project from Devin The Dude, Jugg Mugg and Rob Quest marked a dramatic departure from the imprint’s other projects, which often centered on graphic depictions of sex, violence and life in the ghetto. The Odd Squad, on the other hand, brought a self-deprecating light-heartedness to such selections as “Fa Sho’,” “Smokin’ Dat Weed” and “Here to Say a Lil’ Somethin’.” It’s also one of the first examples of blues rap, something Devin The Dude would later make a cornerstone of his solo material.

Sauce Walka and Sancho Sauce’s 2014 “2 Legited 2 Quited” seemed to have everyone doing the group’s patented “Hadouken” dance across the south. The regional hit became the point of controversy after Drake reneged on a promise to hop on the remix. Unfortunately for the Twinz, the conflict overshadowed overall impressive release. In Sauce We Trust showcased nimble lyricism delivered through a style readymade for the new generation of Houston rap fans.

In 1989, the Godfather of Rap-A-Lot (and essentially Houston Hip Hop altogether) J. Prince made the executive decision to insert Scarface and Willie D in the Geto Boys’ fold and history was made. That faction’s debut, Grip It! On That Other Level became a breakout success which eventually caught the ear of Rick Rubin, who remixed and rebooted the LP for the self-titled project that packed a high-def boost in curse words and controversy. Do it like a G.O.

Z-Ro could be considered one of Houston’s most cherished entity who never crossed over into mainstream Hip Hop, but doesn’t necessarily have to. The Mo City Don continues to put out quality record after quality record whether people are watching or not. There isn’t a better example than Let the Truth Be Told. Opening track “Mo City Don” is probably the best lyrical exercise of his career as he spits over Eric B and Rakim’s “Paid In Full” instrumental. More interpersonal tracks like “Respect My Mind” proves exactly how clever he can take hood paranoia and blend them with Sade interpolation without sounding forced.

Shocking. Explicit. Unapologetic. Brutal. Those words put the Geto Boys formal release as the unit the world would come to know in proper perspective–and that was the album cover (which is 100 percent authentic, seeing that Bushwick Bill shot himself in the face after a nearly successful suicide attempt). The little big man brought the terror on tracks like “Chuckie” while Willie D would go on to forever contradict his future Facebook PSA self on chalky misogyny as heard on “I’m Not a Gentleman.” As for Mr. Scarface, he set a steep precedence for his inevitable iconic solo career by painting masterpiece theater on one of the greatest rap songs of all time, “Mind Playing Tricks on Me.”

The opening skit for Big Moe’s City Of Syrup sets the tone for probably the best full-length ode to promethazine ever created. How sad the king of dat purple drank eventually succumbed to an overdose of the drug a decade later—before it would become a Hip Hop staple. By now, City Of Syrup is almost prolific. Thankfully, tracks like “Barre Baby” “June 27” and “I’ll Do It” were slick, thick and full of smooth vocals from Big Moe. Never get high on your own supply.

In the wake of Tupac’s death, Scarface’s 1997 “Smile” collaboration with the late rapper showed two rap titans at their respective peaks. (Not to mention fueled rumors Makaveli was still alive.) The man born Brad Jordan remained at his usually lofty standards throughout the rest of The Untouchable, crafting a weed anthem that stands the test of time in “Mary Jane” – and whose beat got jacked by Ashanti for her hit single “Baby” five years later. Although Scarface rolled solo throughout much of the album as he traversed his usually macabre subject matter (“Ya Money Or Ya Life,” “Untouchable”), his teaming with Dr. Dre, Ice Cube and Too $hort on “Game Over” shows the type of clout the Geto Boys member carries with other rap icons.

On several accords, Slim Thug’s Already Platinum is a failed experiment. The hometown still tipper abandoned his trunk rattling roots in favor of The Neptunes’ spacey hybrids, who in turn, didn’t gain any additional traction for their Star Trak label outside of the Clipse. And the album definitely did not live up to its lofty record sales proclaim (a feat that wasn’t exactly difficult in 2004). But those without any prior allegiance to the Boss Hogg were privy to an excellent product, whether he was chomping up rap estate on “Like a Boss” or telling it is on the earth shattering “The Interview.” Not too many rookies can boast they chopped it up with Jay Z, Bun B and Pusha T on their debut album and not be eaten alive.

A locally elected voice of the people is always the best figure to speak for the streets and Fat Pat surfaced as that guy in the late 90s with his debut, Ghetto Dreams. In a time where southern rappers (mainly from New Orleans) for making themselves hood rich and famous, the Dead End Alliance figurehead was that for H-Town. Sadly, his potential was cut short when he was gunned down before the release of his debut. Posthumously, his hood classics such as “Do You Like What U See” and “Peep N Me” ensured that he would never truly die.

As the Geto Boys became national rap fixtures in the early 1990s, Rap-A-Lot Records looked to expand its roster. The eponymous 1991 debut album from the Convicts included a focus on the life of convicted criminals. Houston’s 3-2 and New Orleans’ Big Mike partnered on their one and only album and delivered a riveting expose on life from the perspective of man stuck in the cycle of the criminal system. Big Mike – who later joined the Geto Boys for one album and also enjoyed a successful solo career – showcased his brand of remorseless gangsterism on “Peter Man,” while Lord 3-2 (as he was also known) illustrated the shortcomings of the rehabilitation process in the fiery “I Ain’t Going Back.” Of course, the duo certainly present the best case for themselves at their parole hearing on “Free World,” but they certainly kept it G.

Ask Paul Wall who his top 5 dead or alive is and he’ll reply with “Lil Keke” for every last entry. All bias aside, the OG Screwed Up Click member has always sprinkled the Houston music scene with unforgettable anthems such as “Southside” and “Money in the City.” However, his 1997 debut, Don’t Mess with Texas showcased a feisty, young, street savvy rhymesayer who was wise beyond his years. If you listen closely, you will likely hear “Bounce & Turn” and “Still Pimpin’ Pens” blaring out somebody’s whip. The popularity of the full-length Screwed Up version has immortalized the music all the same.

Get Ya Mind Correct solidified both Paul Wall & Chamillionaire as leaders for Houston’s 2000s renaissance alongside the likes of Mike Jones and Slim Thug. Paul Wall was the slick talking Slab God going on to create a fairly solid career for himself. Meanwhile, Chamillionaire became a lyrical monster who managed to do so without even using profanity. The two together managed to sell over 100,000 copies independently as well and earn major record deals.

By all accounts, Scarface’s The Fix is one of the most respected releases in Hip Hop history. The 2002 offering impeccably balanced, boasting ‘Face’s bristling honesty and penchant for capturing the visceral pains of progress on a wax in ways that still resonate with listeners 14 years later. “My Block” and “Someday” were the lone singles. Cuts like “Sellout,” “Guess Who’s Back,” “Heaven,” and “In Between Us” were absolute highlights. Snagging Mike Dean, Kanye West and The Neptunes on production was impressive. Landing a then-still-beefing Jay Z and Nas on the same album was the ultimate coup.