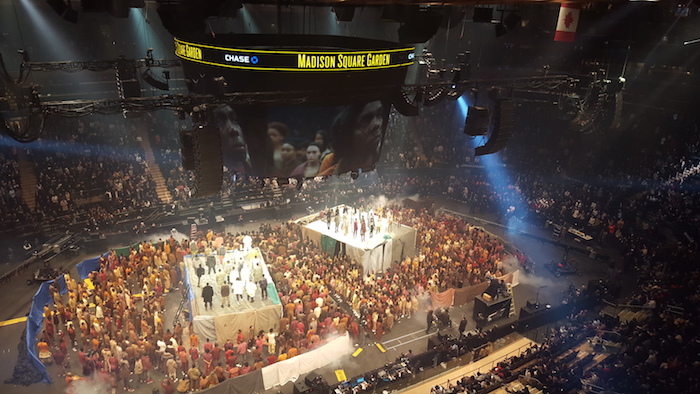 The listening party that sold out the world’s most famous arena in under 10 minutes featured pop-up shop style merchandise booths clad in textured sheet metal. Madison Square Garden saw lines that clogged the hallways as it seemed as if there was a contingent of the roughly 20,000 in attendance who were more interested in a t-shirt, long sleeve or hoodie then seeing the most speculated and delayed album in the illustrious career of Kanye Omari West.

Prior to the grand unveiling, conversations could be overheard up and down the concourses, many trying to figure out for what exactly they had bought tickets. Without much build-up, albeit a slight half-hour delay, that was revealed. Before entering the building I’m sure I wasn’t the only one who felt that way. Once surrounded by the cult Kanye has garnered over these many years, that sentiment of the unknown began to change. Merchandise from past tours was only outdone by what must have been half the Yeezy’s on the face of the earth being in one building.

Kanye entered stage left in low-key fashion unlike his usual more bombastic style. Entering through the lowest walkway, just in front of the first row, he had Lamar Odom, in his first public appearance since a near-death drug overdose, Travis Scott and Pusha T in tow. By time he arrived at the small DJ setup he was surrounded by even more Hip Hop cohorts, from A$AP Rocky to Vic Mensa. 50 Cent and 2 Chainz were also notably in the place to be seen.

“So I’m about to play you the new album. If you like any of the songs feel free to sing, dance. If you like it afterwards feel free to dance, cheer. Whatever you want to do,” Kanye announced before hitting play to the delight of the one-track minded crowd. Through an aux cord on a laptop he revealed what had once been So Help Me God, Swish and Waves and was now The Life of Pablo.

There was a state of unrest as potential energy went kinetic from the mysterious project’s first note. The crowd seemingly took on a sense of alleviation, for the album was here and we were the lucky group who would be hearing to it live for the first time over the next hour. As we listened collectively, it wasn’t the carefree take on his old hits on a tour; more so the kind of effort that aims to perpetually hear slightly more than one had the moment earlier.

A palpable gasp surged through the arena when the tarp that had covered most of what would be the ice or court was pulled away to reveal an installation. Two square structures were surrounded and topped by a few hundred models wearing Yeezy clothing. The assembly, when taken in as a large mass, looked like the best dressed refugee camp in history. The models, picked from an open call earlier this week, were a beautiful diverse group of shades, not even mentioning the clothing. At one point it was revealed on the jumbo screen that the incomparable Naomi Campbell was among their ranks.

With each boom-bap the Garden shook and without the highest of sound clarity and quality it was not sufficient acoustic settings to deeply review the album but more of an overview of the sounds and vibes it held. Despite the shortcomings in sound quality there was more than enough elements available to strongly suggest that Kanye had did it again. When the tracks were in their infancy, the attendees waited on the edge of their seat. As they hit their musical apex, the audience reacted with satisfied energy. That was in a lot of ways a summation of the experience. I had second thoughts when deciding whether or not to spend $60 on a Stubhub ticket to “Yeezy Season 3.” After all I didn’t even know what that was going to sound or look like.

The atmosphere was fit for a king, who called himself “a god” without a nonbeliever in site. I can’t speak for those wearing the boosts or Yeezus tour shirts designed with skulls and scythes but it didn’t take many of the 10 tracks on the project to win me over. I left satisfied.

Following Pablo’s completion, Yeezy rhetorically asked, “New York City tell me, how do you feel? Did I deliver on my promise on this album.” Knowing he had exceeded lofty expectations to the intimate 20,000 person group of first listeners, he did a bit of boasting before taking requests like a DJ at any other bar across the five boroughs.

“I’m glad to see New York City standing behind the crazy ni**a from the interviews,” West continued. “Respect [Michael] Jordan but people did come to Madison Square Garden to see me play one on no one,” he responded to cheers of “fuck Jordan and “fuck Nike.”

The secrets revealed Kanye hung around playing selections from the record mixed with older releases and even gave Young Thug and Vic Mensa a chance to show out for the crowd with some new songs. “Do you have any specific songs you want me to play on the album before we go,” he asked.

“I love you guys, I feel a lot of times I get misunderstood just as an artist because you see so many artists be controlled by corporations or public perception or their current finances or whatever,” he continued. “If you are gonna be an artist you just gotta do what’s in your heart and fight for every dream that you may dream, whatever discipline it may be no one can tell you what field to stay in.”

Eventually Kanye exited the same way he entered; reserved, content and even giving off a sense of happiness. “I just want to bring as much beauty to the world as possible, I’m only 38-years-old,” Kanye said minutes before his exit. The Garden, the reveal, the music, The Life of Pablo, it was all beautiful, and now it was out in the world. For the 10th time ever we had a new Kanye West project to discuss, debate and dissect.