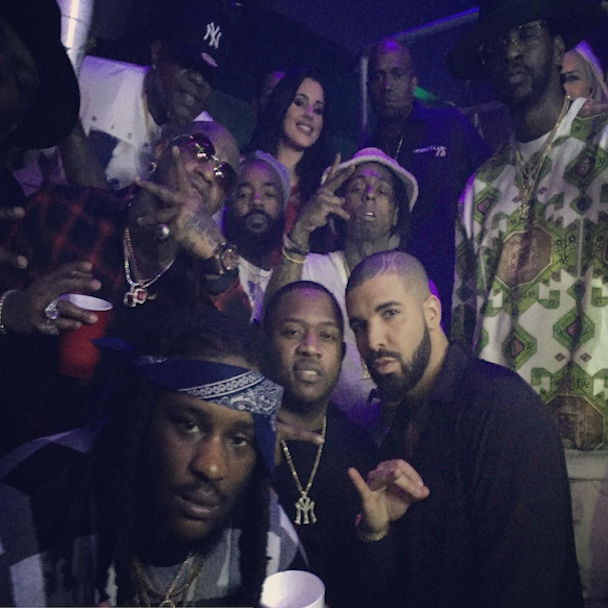 This week, 50 Cent says he will help Cleanthony Early get his belongings back, Big Sean’s “Blessings” goes double platinum, and King Louie gets released from the hospital after being shot in Chicago.

Drake Updates Fans On “Views From The 6” Release

Drake gives an update on his forthcoming project, Views From The 6, during his New Year’s Eve party at E11evn Nightclub in Miami on New Year’s Eve. The project is rumored to be released on January 6. No caption necessary.

Lil Wayne And Birdman Pictured Together

United We Stand Divided We Fall!! #AubreyJustFinishedPerforming   A photo posted by Mack Maine (@mackmaine4president) on Dec 31, 2015 at 9:56pm PST

Taraji P. Henson is named USA Today’s Entertainer Of The Year. The actress portrays Cookie Lyon on Empire, which debuted in January on Fox and focuses on the workings of a fictitious Rap label. Caption: “WOOOOOOOW!!!! Thank you @usatoday so honored!!! #WhatAYear #MoreToCome cause #GodIs and that is all that I know!”

King Louie Is Released From The Hospital

King Louie was shot in the head on December 23 in the South Side of Chicago. During an interview with CNN, the rapper said what he believes is going on in Chicago. “The Devil’s working overtime,” “Thanks to God & everyones prayers I’m outta the hospital. Did an interview wit @revolttv to let y’all know how I’m doing. #MUBU”

2 Chainz Made Nearly $2 Million On His Christmas Sweaters

2 Chainz makes nearly $2 million on his Christmas sweaters. The Atlanta rapper had multiple designs available, including one that featured a dabbing Santa. Most of the proceeds went to his T.R.U. Foundation, which 2 Chainz used to help those in need.  Caption: “When trappin makes it to Forbes. Article link in bio”

El-P shares a snippet of an instrumental that may be featured on the group’s next album Run The Jewels 3. Despite the snippet, no other details have been revealed. Caption: “RTJ3 is just getting started.”

http://www.instagram.com/p/_xji3nirrU/?taken-by=remyboymonty1738 Merry Christmas, here’s a brand new BMW. Fetty Wap gives Monty an i8, an all-electric sports car .Caption: “Back to Back In Beamers !! One of My Best Gifts Ever Thanks Bro @fettywap1738 LTN #i8 #RemyBoyz1738 #ZooGang #RGF #AMG”

If you were planning on purchasing one of DJ Khaled’s Bless Up sandals, think again. They’re sold out on his website. He hooks up Dwyane Wade from the Miami Heat, his basketball team.
Caption: “Big up my brother @dwyanewade fam from day 1 @miamiheat own Dwade !! Dwade wit his bless up slides ! Wit the bless view !!! Major! @wethebeststore @wethebestmusic #wethebestlifestyle #wethebest”