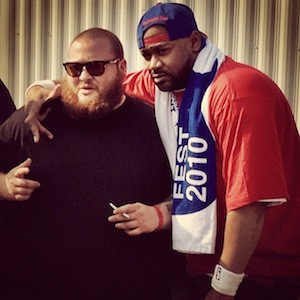 Let’s be completely honest, current events between Ghostface Killah and Action Bronson were unfortunately orchestrated by fans, media and everyone else in-between. And yes, it’s been somewhat entertaining to watch on the sidelines. Everything leading up to now has been building for quite some time, going as far back as 2011. Add Hip Hop’s overwhelming need for WWE levels of showmanship and competition, Action Bronson’s comments during ESPN’s SportsNation last week were inevitable. It’s understandable for him to say something when damn near every interview (expect one done with DX’s own Andre Grant earlier this year) keeps beating this dead horse. Comments such as “not rapping like this no more” was a weak moment before later apologizing. For heaven sakes, vocal delivery aside, Tony Starks and Bam Bam are two completely different artists. Even comparing debuts, Ghostface’s debut Ironman nearly twenty years was filled with epic mob stories while Mr. Wonderful is a slick musical tribute to New York. One rhymes about cooking coke while the other one is actually a trained chef. Leave it alone and let it be. With that in mind, how cool would it have been for these two to actually came together for a track outside of that one “Meteor Hammer” track from 2011’s Legendary Weapons album. This problem illustrates exactly why there’s a lack of unity in New York Hip Hop.

Despite being pretty humorous, Ghostface’s reaction video felt awkward and unnecessary. Threatening to hang someone and gut them like a fish along with various other forms of violence doesn’t make much sense. Especially at a time where mainstream media already thinks of black men as dangerous wild beasts needing to be put to sleep indefinitely. Keeping things 100, if Stark were to really do something to Bronson in any way, he’d be locked up quicker than it took Dylan Roof to order a Whopper from Burger King. For Bronson to even exist in today’s current rap climate is a miracle regardless of how talented he his. Moments like these don’t do much to make the birthplace of Hip Hop that attractive. Both Ghostface and Bronson were unfairly pitted for artificial beef while West Coast and Southern Hip Hop continues to reign in various ways.

As everyone laughs about Ghostface vs. Bronson, Future’s DS2 has made huge noise for the past few weeks. This morning alone, he announced four shows in four different cities this week. The first city will be his native Atlanta and already, there are ridiculously long lines around the venue. This year, Ghostface has dropped two albums that haven’t chart and Mr. Wonderful didn’t even hit 50K it’s first week. Meanwhile, Future is slated to at least do over 100K. Just think about for a second. Sure, the beef between Birdman and Lil Wayne may be the biggest rift of the year. However, the south can still survive in the midst of their issues with one another. The same can’t be said for New York as it’s still hanging from a commercial thread.