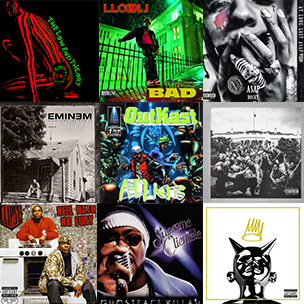 The Sophomore Jinx: 15 Second Albums That Outdid A Great Debut

The concept of the second album jinx is an old one. We’ve heard it all before, you create a decent to great debut project, which gets you over the first hump, but can you do it again? Can you do it better?

Here, we give you 15 examples of artist’s doing just that. And it’s no wonder that all of these people are either still beloved or still around, making great work and growing.

A$AP’s new one is a significant upgrade from his previous effort, in which we saw the Harlem rapper bring a little passion to the table to go along with all the flash. In many ways things can look too simple for Rocky, but this time he experimented just enough with Danger Mouse at the helm and the random addition of a former London street artist Joe Fox waiting in the wings. Then there are its elegiac aspects, as the passing of Yam$ (spiritual guide, fellow swag lord) signaled a turn through songs like “L.$.D.”

K.R.I.T’s first was good, without a doubt, but sample clearance issues and fatigue weighed too much on the project. Cadillactica was transcendent boom-bap, trunk-rattling bass, and K.R.I.T’s signature bars all surrounded by the world he was creating. It was punchy, and almost arrogant where K.R.I.T. had been content to play the artist’s artist in the past. Now, though, he was front and center, leveling his competition with a “King Of The South” refrain that still remains unchallenged.

Kendrick Lamar – To Pimp A Butterfly

It’s hard to top how superlative good kid M.A.A.D City was, but somehow Kendrick managed to move the narrative out of his hometown and into the wide world. The album was as sprawling and ever changing as Los Angeles itself. Each thought was shot out of a cannon. And from the very beginning of the Flying Lotus directed “Wesley’s Theory” you knew that this album wasn’t just speaking through rhymes, or couplets, or thoughts, but through music. And for all its seriousness and at times somberness, it remains triumphant in what it is saying: That, every once in a while, the bottom stands up, and when they do every single thing in this world changes.

Low End Theory is one of the best Hip Hop albums of all time, and it may not even be Tribe’s best album. Think about that for a second. For many, People’s Instinctive Travels was the beginning of a non-cursing, unity movement called Native Tongues in which the Queen’s emcees took center stage. But what was really special about Low End Theory, past the crazy boom-bap of Tip, was the emergence of Phife Dawg as a reasonable foil to Q’s zany mastery. This time he was writing his own rhymes, and it showed on classic cuts like “Butter,” “Check The Rime,” and “Buggin’ Out.”

Mobb Deep dropped Juvenile Hell to the sounds of syringes crackling under timberland boots in the projects and it flopped. It was a disaster, as a group called the Wu-Tang Clan had done the sound that they were going for, well,  better. Their next album, though, would go down as one of the hardest Hip Hop albums in American history. It was nihilistic to the core, putting forth a version of the urban truth that stood in direct contrast to Nas’ rapper-as-concrete-monk dynamic or Biggie’s depressive, violent sigh that was Ready To Die. In many ways it was encapsulated in one line: “There’s a war going on outside no man is safe from.” And right there it put you in the driver’s seat of what would cause young black men to live and die together in conditions that could only be made romantic by Hip Hop.

By all intents and purposes, Bigger and Deffer is L.L. Cool J’s best single album. It had it all, and after Radio lit the airwaves up with anthems we still identify as certified classics, Bigger and Deffer was a test that he passed with flying colors. Produced by The L.A. Posse, in a move away from Rick Rubin, L.L. Cool J created the first rap love song in “I Need Love,” and even with all that under its belt, it cemented him as the King of Hip Hop for that period in time.

The Marshall Mathers LP took Em out of the tenuous stage of debut anxiety and sensation, and into the box bonafide star. The album was so dark; an emptying out of all the anxieties and raging emotions that were bubbling under the surface of the American social landscape. Eminem is like a mirror for our id, and never more was that on display in dazzling lyrical style than on TMMLP.

More of an observation and less critical of the work itself, 2Pacalypse Now at times felt overly preachy and heavy handed. Some may call it the most lyrical and technical of his catalog. Strictly 4 My N.I.G.G.A.Z felt less lyrically mechanically and more emotional. Obviously, it featured his most radio-friendly tracks of his career to that point. “Keep Ya Head Up” and
“I Get Around” felt like the perfect balance of his style of delivering social commentary with enough level of bounce for Strictly 4 My N.I.G.G.A.Z. to be more entertaining. That pure emotion is something that would be elevated from then on for Me Against The World and All Eyez On Me.

After the groundbreaking Licensed To Ill, the world was at the palm of Mike D, MCA and Ad-Rock’s hand. The Beastie Boys pretty much created the most successful rap album of that decade. Issues with l Def Jam and producer Rick Rubin made the chance of a successful follow-up zero-to-none. Making their way to Capitol Records, they dropped what some consider the funkiest album of the era with Paul’s Boutique. Thanks to the production duo The Dust Brothers, The Beastie Boys were able to balance the whimsical with lyrical directness.

Southernplayalisticadillacmuzik truly established OutKast as the sonic equivalent to their name. Okay, the album earned them a Source Award win, which they were booed for as the media hyped east coast vs. west coast beef seemed more pressing. Folks didn’t even take Andre 3000’s speech seriously (bet they do now). For their sophomore album, Big Boi and 3 Stacks really started to find their own identities with ATLiens. Together, they left the Cadillac playa stuff behind for something that was otherworldly and meaningful. Organized Noize’s production went from supporting role to a star of its own.

A lot was going on with Ghostface Killah after the release of his solo Wu-Tang debut Ironman. Not only did he face some jail time from a club incident, his trip to Africa with Rza led to a totally different mind state. The end result is an album that’s perfectly (by Wu Tang standards) blended core Hip Hop appeal with some mainstream seasonings. Pretty Tony’s second solo outing featured those same signature narratives with some up-tempo production peppered in. There wasn’t a better example than “Cherchez La Ghost” featuring Wu-Tang brethren U God.

The Clipse – Hell Hath No Fury

Pharrell and Chad were on to something when they began handling production duties for the brothers Thornton. Sure, their true debut Exclusive Audio Footage was indefinitely shelved and Lord Willin’ became a serviceable first outing despite “Grindin” becoming a huge hit. After label battles with Jive Records, a frustrated Pusha T and Malice managed to release what many consider the “coke rap” album of the decade. Featuring some of the most cohesive production from the Neptunes ever, The Clipse made drug-dealing psychology something equally celebrated and hated while visceral nuanced.

Even J. Cole himself was disappointed with the end result of Cole World: Sideline Story. Then again, it doesn’t matter because he let Nas down. Looking deeper into his own pathologies, he made up all the mistakes with his debut with Born Sinner. Not only did Jermaine himself streamline his songwriting abilities for better radio singles like “Power Trip” and the TLC assisted “Crooked Smile,” his production improved by miles. In between, his rhymes became slightly more interpersonal, something he would double down on for his opus 2014 Forest Hill Drive. There isn’t a better example than album highlight and confessional “Let Nas Down.”

3 Feet High and Rising was cheery, uplifting and everything that mainstream Hip Hop was began to detest. Regardless of how they hated the “hippie” label, it unfortunately stuck to them as gangster rap started becoming extremely popular. No matter how dope tracks like “Me, Myself and I” or “Buddy” were they were seen as soft. For their follow-up De La Soul Is Dead, there wasn’t a better description of the trio’s new direction than the cover displaying a turned over flower pot. The underlying positivity De La stood for remained. However, the Prince Paul’s beats were darker and the subject matter felt edgier. Most importantly, their bars got sharper.

Love Story was a drastic, dramatic turn for Yela’, whose debut left much left to be desired from the Alabama spitter. Yet, still, there were those who thought Radioactive was more than a muddled consortium of ideas, and the beginning of something new. So despite the rumors of it being rushed, rumors that were confirmed in an interview done some time later. In order to make sure the follow-up didn’t follow in the footsteps of the first, Catfish Billy took his sweet time, crafting a rap/blues/country hybrid that continues to defy any kind of real categorization.