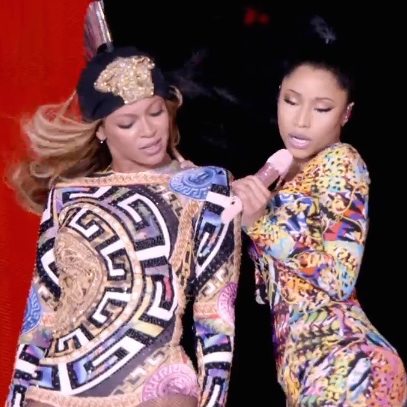 All Eyez On Memes: Nicki Minaj & Beyonce Present The "Feeling Myself" Edition

Today, we deliver some of the top five memes from today’s release of Nicki Minaj’s Beyonce assisted feature “Feeling Myself.”‘

First, Jay Z presents two live streaming concerts. Now, Nicki Minaj and Beyonce present the video for Pinkprint single “Feeling Myself.” Meanwhile, those without a subscription are waiting patiently for a link. Even Vemo displayed a sad face.

When Beyonce stops the world, it stops without question. Following the video release, Beyonce’s loyal fans were left speechless.

There are many who saw the video by now several hundred times to be exact. Here’s one of the things people noticed about the “Feeling Myself” video.

Nicki and Bey are BFFs

Nicki Minaj and Beyonce come of as best friends forever during the video. Not only do they swap clothes but eat hamburgers in the most sexually suggestive way possible.