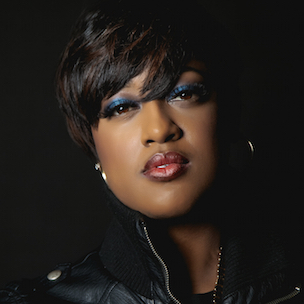 Coming off the heels of her standout verse on Kendrick Lamar’s “Complexion (A Zulu Love),” Rapsody called us up following the deluge of attention she’s received. She hadn’t even heard the album before the thing dropped on iTunes all resurrection Sunday like (surprise!) and the Tweets went crazy from madness or drunkenness or both. First the clean version, like “what?” And then the link for the explicit trailed in behind leaving muddy jazz and Captain Murphy vibes, tie-dying our tryptamine flooded timelines. “I didn’t hear the album until the night it came out,” she told us. Then the jazz and the funk bubbled up into froth and spilled through hers and everyone else’s speakers. Exactly what To Pimp A Butterfly means is being hotly debated, and when you look into Kendrick’s eyes on The Breakfast Club or across from Rob Markman you expect some sign that he’s the one. It was an immediate achievement, with the sounds of future jazz’s Flying Lotus opening the album with a whirlwind on “Wesley’s Theory.”

We spoke to him a year ago, just before his acid washed solo journey into the great human footnote, You’re Dead, darted through your subconscious. In that conversation he recounted to us how badly Kendrick Lamar wanted “Never Catch Me” for the then untitled To Pimp A Butterfly, and we could only dream a little dream when wondering how it would have fit in. Maybe between “u” and “Alright?” Acting as a respite between the hardest journey of his life and its redemption? There, an image of the eternal footman may have been had, and not so scary; maybe even triumphant.

Fly Lo is not new to the attention but Rap may be. She’d suddenly become the “it” emcee after she helped balance out Kendrick’s dualistic rage.

For Rapsody this is a welcome change of pace. She’s only won our most underrated emcee two full years in a row. “The attention has been amazing in terms of both the people who didn’t know who you were checking you out and the people who have been riding with you from day one,” her voice clicked through the phone with the fatigue of sudden celebrity. Her cadence is, essentially, her rap voice. She could’ve busted a quick sixteen right then and there. But how did she feel when she first heard the album? “When I heard the album (I downloaded it that night when it came out) I thought, ‘This is beyond Rap, this is beyond Hip Hop.’ I don’t even look at Kendrick like a rapper, he’s an artist.”

And that’s the power of amazing music. It raises the bar for not only those who’ve worked on the album — experiencing the process of putting together a very, very good thing — but for the competition as well. Jay Z is fond of saying, “Hip Hop is competitive,” shoot, everyone involved with the genre uses “competition” as kind of catch all, but what if music is transformative? The gaggle of emcees and producers who helped create the soundtrack for Kendrick’s vision all describe it this way, as not only an emerging of one single butterfly from its cocoon (to be openly cliché), but of the genre itself waking up to something else entirely. In a conversation with Justin Charity of Complex, Terrance Martin described the making of the album after Kendrick came back from Africa in this way, “I’ve never been to Africa. From what I hear, anybody that goes to Africa comes back with a different perspective. [Kendrick] came back with a different energy, and everything we talked about, musically, that’s just what his energy was. It wasn’t, ‘We’re gonna do jazz, we’re gonna do funk,’ we just wanted [it] to be the soundtrack to his experience. What other music to do behind that but black music? Soul music?” For Rap’ the album opened up Studio Ghibli like (maybe) another world, “The album put me in a different space… Out in an open space somewhere. I haven’t felt like this about an artist for a long time.”

“Where My Homegirl Rapsody At, I need You To Speak Your Mind”

How could you not be inspired by it all? It’s a cavalcade of artists coming together to create something meaningful to only them. It was an exposition of the idea that I am as we all are. Or, as Kendrick recently stated in an interview with MTV’s Rob Markman, “I’m not speaking to the community. I’m not speaking of the community — I am the community.” So when asked whether she thinks the album would make other emcees go back to the drawing board she had this to say, “I don’t see how it wouldn’t. To hear an album like that and see the care and creativity that went into it is crazy.”

Such was the case with Beauty and the Beast, her second EP acclaimed by critics and appreciated by both day ones and new recruits alike. And, while she just released a deluxe version of the Beauty and the Beast EP to help capitalize on the momentum created by her stunning guest verse, she also told us she’s been in the lab working on her own full-length. “We’ve been thinking about it since after Beauty and the Beast. I always take two months off after projects just to live, you know? But we’ve been working and it’s slated to come out in the fall.” Yo, great news as the North Carolina native prepares to continue her journey, though it may seem to new jacks to be beginning anew,