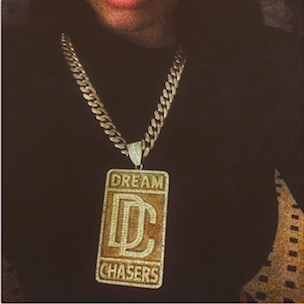 Meek Mill is not usually one to be coy, but in this IG pic with a woman whose silhouette is oddly familiar to Hip Hop fans he appears to be claiming his territory. The rumors about the relationship between Nicki Minaj and Meek have been raging since the end of her relationship with Safaree, the inclusion of the Meek written “Buy A Heart” on her album instead of K. Michelle’s, and the recent pictures that have surfaced of them together. So, it looks like Ms. Minaj is off the market yet again. The good one’s go way too fast, huh? Caption: “U look better in it……..”

The West Coast was coming together in solidarity amicably surrounding the taping of the highly anticipated biopic Coming Straight Out Of Compton. That is, until Suge Knight found his way behind the seat of a car and tragedy struck the set. He’s turned himself in today after the incident, but we thought it just as relevant to show the calm before the storm. Caption: “#YallKnowWhyImHere History made in Compton today.#Westside #Thedocumentary2 Coming Soon”

Suge Knight finds himself in another controversial situation that involves the lives of others. Lawyers confirmed with HipHopDX that Suge Knight was a suspect in a hit-and-run that killed his friend Terry Carter. This was related to an altercation that happened on set during a filming in Compton. Caption: “Across the street.. #ambulance #emgergency#straightoutofcompton #compton#someshitalwayshappens #atwork #itsgoingdown#whathappend #crazyish #rescue #comptonrescue#tams #tamsburgers #tams21 #21 #911”

I think we all try to be good people, but it's just things you go through.. That make you who you are Follow me Back to the Future.. You Made Me Video on the way.. #TheYoungOGProject #YoungOG

F-A-B-O-L-O-U-S made a strong showing by posing in his super you-can-never-cop-these Nike Mag’s while in front of an actual Delorean somewhere in the fly-as-fuck nebula. Not only was he wearing ski goggles (because when heading back to the future one has to be prepared for anything), but he managed to pull off the hat trick of not looking like a hypebeast. Only Fab. Caption: “I think we all try to be good people, but it’s just things you go through.. That make you who you are Follow me Back to the Future.. You Made Me Video on the way.. #TheYoungOGProject”

Via Twitter, Rihanna posted a black and white image of her posted next to Kanye West and Paul McCartney. Shortly after, she posted a link to her website that contained their new track “FourFiveSeconds,” which will be featured on her upcoming album R8. Here’s her reaction to the link going live. Caption: “I love to see how excited she still gets @badgalriri Blessherheart #SorryJaybrownandDorothy#Wejustthoughtthelinkwasntliveyet”

"Just left the funeral ceremony for my brother A$AP YAMS..We will miss you brother. Happy to see everyone who came out and showed love. ALWAYS $TRIVE AND PROSPER." ~ @theromeohart ~ #LIVELOVEASAPYAMS ? #LLYAMS ? #YAMSFOREVER.???????? #HARLEMWORLDFOREVER. ⚡️???

RIP A$AP Yams. The news of his death caused a stir among the hip hop community, especially those who knew him personally. His memorial service was held this past weekend at New York City’s Frank E. Campbell Funeral Chapel. The cause of his death is yet to be revealed, with A$AP Rocky criticizing those who suggested a drug overdose. Caption: “Just left the funeral ceremony for ASAP YAMS..We will miss you brother. Happy to see everyone who came out and showed love. ALWAYS STRIVE AND PROSPER.”

FOX’s hit series Empire have caused a stir in both the music and entertainment industry in many ways. In the next coming weeks, we are expected to see Snoop Dogg on the show, with 50 Cent hoping to appear as well. Now, Lee Daniels is looking to enlist another A-list actor for a cameo: Denzel Washington. Caption: “Trying to talk this one into doing a guest star on#empire #nextweekdinneronme”

And of course to my BROTHER in this shit. This whole business is a grey blur. Thanks for keeping it black and white with me always (lightskin pun intended). Enjoy your day and congrats on everything this year. @realcoleworld

Yes, J. Cole has a track called “January 28th” from his latest album 2014 Forest Hills Drive. Yes, that is his birthday. Real recognize real, Drake takes to IG to shoutout both J. Cole and Rick Ross on their born day. Caption: “And of course to my BROTHER in this shit. This whole business is a grey blur. Thanks for keeping it black and white with me always (lightskin pun intended). Enjoy your day and congrats on everything this year.@realcoleworld”

Airport security is no joke, especially when it comes to any type of weapon. First of all, why does he have a loaded gun? Apparently, Benzino, one of the stars of “Love & Hip Hop: Atlanta,” had forgotten to check in his bag, which contained a loaded gun. He was sent to jail shortly after the arrest at Hartsfield-Jackson Atlanta International Airport. Caption: “Have a great productive day everybody!!

and so it begins. #MeowTheJewels

Last month, Run The Jewels’ producer El-P announced and previewed a documentary of his newest project: a remake to the group’s track “Jeopardy.” Using cat sounds only, this track will be called “Meow The Jewels.” Clever. He gives us three previews via IG, and announced via Twitter this would be the “single illest fuckin record ever recorded.” Caption: “and so it begins. #MeowTheJewels”