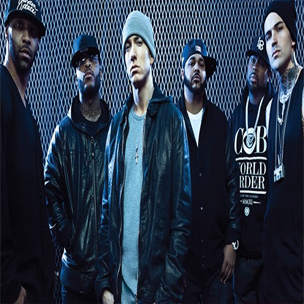 Eminem rustled the boys together for the “Shady CXVPHER.” Told them all psychically to get their freestyles ready, and the Shady crew did not disappoint. It’s amazing how the point man has fashioned out of such individual emcees a “quintet” in Slaughterhouse and a young macabre sin slinger in Yelawolf. It’s something Aftermath and Shady have been very good at. Their draft picks don’t seem to do much after their stint with the Detroit emcee, but as a squad they absolutely beast.

And that’s what they were brought together to do. Spin tales of their own over a zero beat, and mics so clear you could hear a car straddle a pothole or the eerie silence of a hollowed out industrial crucible in the sky. The Battle Rap elements are all there, but instead of hampering each emcee, it seems to give them the room to breathe. Maybe the Total Slaughter maestro is on to something.  Of course we had to weigh in. This time, we’ve got freelance writers Henry Mansell and Jay Balfour, and myself, Features Editor Andre Grant.

Has Shady Done It Again?

Henry: A cursory scroll through #Yelawolf on Twitter following the delayed release of the “Shady CXVPHER” illustrated a clear consensus that echoed among Hip Hop’s keyboard warriors. Buffs from across the spectrum who had tuned in weren’t feeling his material. Was it that bad? Or were the others just that good? Yela’ found himself rooted at the foot of a gaggle of opinion hierarchies, with comments springing from, “Yelawolf should have stayed at home” to, “Damn Yelawolf no bueno,” which is Spanish for no good. Twitter, as they say, had no chill. Nevertheless, the cypher, as it was always going to do, stimulated some compelling dialogue. Yelawolf’s appeal is anchored in his off-kilter aesthetic but it’s the said that’s seen the Shady wordsmith’s talents so often curtly thrown into the recycling bin. Thanks in part to his engrained social fabric, a white rapper from Alabama; he’s an easy target, à la Charlamagne Tha God and Lord Jamar (to whom Yela’ later references). However, if we egress from the politics, Yela’ can rap.

He inaugurates his verse with his “backstory,” setting the narrative tone for his rhymes. He then effortlessly weaves through his biography, lacing his arc with a bed of entendres, “I still smoke to the cigarette, butt.” While the other partakers to the cypher (Slaughterhouse and Eminem) go straight acapella, Yela’ interpolates some bottleneck slide guitar melodically behind his bars in a fitting nod to the visual backdrop of his birthplace — Gadsden, Alabama. After claiming immunity from uniting rock and Rap, Yela’ throws the ball back into Charlamagne Tha God and Lord Jamar’s court with, “Still I’m working, sawing, milling this tree / Building this house exactly the way Charlamagne Tha God and Lord Jamar thought it would be / Wait a minute, the Lord and the God hate me / Jesus Christ, I am the White Devil / Nah / I’m still working, sawing, milling this tree / Building this house exactly the way I thought it should be.” Wrapping up, Yelawolf invites us to tour his materialistic possessions with a nod to Jimmy Iovine for the check.

Although Yelawolf’s verse will no doubt get lost among the lyrical diatribes of Crooked I, Joe Budden, Joell Ortiz, Royce Da 5’9 and of course, the verbal acrobatics of Motor City luminary, Eminem, one can’t help but tip a cap to the Slumerican front-man for not only standing toe-to-toe with these lyrical titans, but for holding his own. He’s an underdog, probably always will be, but Yelawolf’s CXVPHER continues.

Andre: The dexterity on Slaughterhouse alone is, I don’t know, radical. There’s an emotion in each of them connected to a certain place. Joe’s chip-on-the-shoulder is Jersey sized; Joell Ortiz’s against-all-odds seems molded through jagged high-rises jutting into a misshapen NYC sky; Crooked’s breath is thoroughly filled with the moldy, violent sub-urban LBC; and Royce da 5’9 feels filled with the broken promises and amber beer bottles of a broken, funk filled Detroit. The mutual balancing of their sounds and ideas and places like getting those EQ’s just right is what I, personally, have been expecting from a Slaughterhouse record. Like some kind of rap Wild Buffalo Bill tour across America. Each one speaks the language of their people, and you remember that the United States is an amalgam of cultural landscapes whose new language is Hip Hop.

Take Yelawolf, for example, who gives you his best Bob Dylan, nah, his best Walt Whitman. The peculiar meanderings of Alabama move through his flows. The creek that you used to be able to drink out of that now tastes like BP, or the ecosystem now lost through American ingenuity or greed or whatever. He warns you against the wedding of Rap and Rock (I think he means reconciliation?) but he’s probably the only one interested in doing so, and perhaps the last that should try. It’s a testament to the creativity of the Shady team that they should frame things this way. “A Shady America,” should have been the campaign slogan. I may have voted for them.

The crown jewel, though, is always Em’. It’s tough to put words to his flow at this point. Is he just a genius technician? Or is he something more? Raps’ very own American Horror Story, or Rocky Horror Picture Show? It doesn’t matter at this point. He’s a reached a level of Rap superstardom and mastery of craft that says he can do just about anything with words. People who are really, really good at something sometimes get to the point where they’re playing against themselves, and Em’s been there for a while. When was the last time someone even challenged him? When Nas’ said, “And Eminem murdered you on your own shit?” Whatever the case, I’m just here to enjoy it. And one day when I’m old I hope to see him at some post-apocalyptic concert in a desert somewhere so I can remember.

Jay: Eleven minutes into a music-less cypher, Eminem begins his pre-amble with: “I just turned Slaughterhouse into a quintet.” A few years ago when the group signed with Shady Records there was the Royce Da 5’9 history to point out, but it was also a chance for Marshall to co-opt their lyrical platform for himself. The group’s label ties first manifested in a bonus track feature on Recovery and ever since it seems like the signing has been a way for Em’ to pick the Rap lunch table he wants to sit at. Slaughterhouse is now a corporate machine for Shady’s Total Slaughter as much as it is an artistic vehicle for a new album. And, it seems, when Eminem wants to spit a seven-minute acapella, they’re there to make it seem less out-of-touch.

He’s stuck. He wants people to listen closely enough to decipher his acrobatics while granting him a pass that they shouldn’t actually need to amount to anything. There’s Joe Budden early on, legitimately crying out for personal and emotional help in a sadly obligated verse of his own. In the context, Budden’s family issues seem downright depressing and out of place. None of the verses acknowledge the others, but you can imagine Eminem trying to lift his spirits about the assignment, like, “C’mon Joe, there’s Ray Rice jokes to be made.”

There’s a neurosis to Em’s lyrical attack, a compulsion to string together words that shouldn’t seem to fit. His latest serving is worth all the “oohs” and “aahs,” but a 42-year old man that jokes about punching a Pop star in the face and spits derogatory lines about Anderson Cooper’s sexuality isn’t just tired, it’s corny. Even with — or maybe especially with — similar and more violent tirades splayed out throughout his career, Em’ used to be a voice for youngsters in angst. He’s as strong a lyricist as ever, but he’s long left that more important trick behind.

Henry Mansell is a Birmingham, England native infatuated with Hip Hop music and culture. His favorite question is, “Who Is Your Top 5? Dead or Alive.” Alongside HipHopDX, Henry’s work can be read on publications including XXL and BattleRap.com, among others. Follow him on Twitter @HenryMansell.

Jay Balfour is a freelance writer and editor based in Philadelphia, PA. In addition to HipHopDX he’s written for publications like Bonafide Magazine, Red Bull Music Academy, and more. Follow him on Twitter @jbal4_.