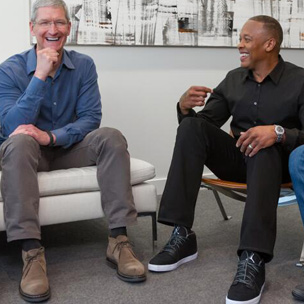 The limits of just how far Hip Hop culture and music could infiltrate corporate America were seemingly expanded on May 28 when Apple sent out a press release confirming their acquisition of Dr. Dre and Jimmy Iovine’s Beats Music and Beats Electronics companies for a purchase price of approximately $2.6 billion and approximately $400 million that will vest over time. In one month, tech and computing giant Apple nearly made Dr. Dre a billionaire, while Jay Z and Beyonce’s “On The Run Tour” was officially announced as being sponsored by JP Morgan Chase, and AmEx’s next “Upstaged” concert showcased the brand “not leaving home without” Pharrell Williams and Spike Lee. In a gangster rapper (Dre), ex-drug dealer (Jay) and the man once who helped push cocaine Rap into the mainstream (before seeing “Blurred Lines” and getting “Happy”) cashing in, is this only the beginning of fools rushing in to Hip Hop culture, or, are the fools our Rap heroes who are now older and—anathema to what Rap once stood for—truly down with “the man.” Furthermore, if this is only the beginning of “fools rushing in,” what steps do Rap’s next millionaires and billionaires potentially need to do in order to cash in from “fools” tripping over themselves to be down?

Fear about Rap entering the once shuttered doors of billion dollar boardrooms reared its ugly head when word leaked of Apple executives getting cold feet about the brand’s groundbreaking purchase of Beats Electronics. Upon realization that the purchase nearing finality, a video surfaced of Dr. Dre proclaiming, “The first billionaire in Hip Hop, right here from the mothafuckin’ West Coast—believe it.” The cities Compton, Watts and South Central Los Angeles were name dropped. Videographer, singer and actor Tyrese Gibson teased director F. Gary Gray for being “drunk off Heineken” and rumors began spreading that with the viral clip, Gibson may have crip-walked on the grave of a $3.2 billion deal. But very few, if any, reliable sources verified Gibson’s clip giving Apple cold feet. Most of what was reported was just gossip and Internet scuttlebut.

How The Beats/Apple Deal Got Lost In Translation

“This is our favorite bit of gossip from our sources,” Billboard.com reported. “Apparently, the Apple family near imploded with outrage when that video went up on Facebook of an ‘excited’ Dr. Dre with R&B singer/former Coca Cola pin-up Tyrese.” Sources such as VentureBeat.com posted similar reports. Continuing about the case of “when keeping it real goes wrong,” Billboard noted Apple is “a conservative company, particularly without the leadership of its guiding light Steve Jobs who would shake things up massively on a daily basis.” In final, they state that “[Dre and Tyrese’s behavior] is not the kind of thing Apple is used to.”

The idea that Dr. Dre’s proclamation would cause fear is intriguing because it potentially shows that moneyed corporate executives are completely out-of-touch with both Hip Hop culture at-present and black culture in general. Hidden inside the obvious fear of prematurely reporting the details of a multi-billion dollar deal that likely needed the cooperation of dozens of executives is some rather overt racism and classism. Dr. Dre, Tyrese and F. Gary Gray are some of the most mainstream, conservative contributors to Hip Hop culture. Regardless of whatever Gibson’s C-walking implied, no one even remotely connected with Hip Hop would assume any of these three men had active street gang ties in 2014. Gibson has appeared in various blockbuster movies, while Gray has directed them, and Dre has numerous endorsements talking about how banal he is. Why would they risk losing those millions by being middle-aged gangbangers? If the three of them were stereotypical “bros” shouting out San Diego, Pasadena and Lakewood, would there have been a similar uproar? The concession can be made that Dr. Dre’s mention of “Compton, Watts and South Central” keyed off thoughts of the most mainstream time those cities were linked, that being Tupac and Dre’s 1996 single “California Love.” Any thought of Tupac Shakur and gangs leads to thoughts of Rap in the mid-to-late ‘90s with drugs, violence and yes, Shakur being murdered in a drive-by shooting. It’s also entirely likely that someone, somewhere (let’s imagine it as Dre himself) had to inform Apple that Death Row (and Rap’s wholly criminalized era) had reached its demise by 1999, with Death Row itself declaring bankruptcy by 2006. Furthermore, Dre himself is a different man too, being so busy as a producer, executive and entrepreneur that his 2001-promised album Detox album still has yet to be released.

Insofar as Pharrell, Jay Z, Spike Lee and Beyonce, the quartet represent four different standards of Hip Hop cultural excellence now being promoted to the forefront of being the best of what mainstream American culture has to offer. Pharrell is effortlessly and unassailably cool. Jay Z provides the ultimate grandiose explication of the Horatio Alger myth, evolving from “D-boy to billionaire,” sampling a bit of the Berry Gordy and Diana Ross love affair mythology along the way with his marriage to Beyonce. Spike Lee? He once commissioned Public Enemy to write “Fight the Power” for a movie that ends in a race riot, while as well being black America’s cultural griot, preserving tales of the black experience—from black Muslim to black college (and more)—forever. When these four people are at the core presentation of what out-sized and capitalistic America has to offer, everything has changed.

Are Rappers Selling Out Or Are Corporations Buying In?

However, are our heroes selling out, or buying in? There’s an argument to be made that at some point, Rap music became bigger than having its success quantified by chart success or even retail brand engagement. And the line between being recognized and somewhat legitimized within mainstream society versus applying their standards to judge excellence within the culture is a thin one. At some point, Hip Hop culture had slowly become ubiquitous and relatable to all realms of global life, and that’s where the need for “buying into” avenues of wealth accrual at a higher level of the corporate environment needed to appear.

The evolution is clear. Run-DMC held a pair of Adidas in the air, and then had shoes designed for them. 50 Cent and Jay-Z didn’t need to prove their worth to Reebok to have shoes made to monetize their brand and image in a new vertical. Fast forward a few more years and when Jimmy Iovine wanted to get into the audio business, there was no cooler person (and more savvy businessman) for him to co-own the Beats brand with than Dr. Dre. Now, insofar as Dre working with Apple? Well, as an advancement from Run-DMC rapping “My Adidas” at Madison Square Garden, it’s amazing to conceptualize the idea that it’s Dre now handing out the shoes-as-marketing and retail design concepts for one of the world’s most respected tech-driven companies.

Why Corporate Interest In Hip Hop Is Here To Stay

Looking ahead, there are clear directives that must be followed by a now evolved Hip Hop culture to excel in this new, radical and corporate space. Foremost, education is key. People getting killed, raped, and disrespected on records no longer equates to people getting killed, raped and disrespected in real life. Rick Ross losing a Reebok sponsorship likely needed to happen, but a lesson about rappers’ personas versus their role as corporate pitchmen must be learned. Yes, Dre can get crunk in the studio, but he should also be expected to deliver when sitting in the boardroom. Yes, Pharrell is cool, but to quote his Rap progeny Pusha T, he also knows how to “put numbers on the board.” Jay Z can get slapped in an elevator by his sister-in-law, too, but when it comes time to hit the stage, he’s absolutely able to deliver.

For every yin there is a yang, though, and not every rapper must pursue such a deep level of corporate/professional engagement in order to achieve success.

Overall, May 2014 is the month when everything changed. Up headed down, left went right and rappers, East, West and everywhere now stand to gain from now incredible access to true wealth. What happens from here is anyone’s call. The corporate “fools” have rushed in to our beloved Hip Hop culture, and they’re clearly here to stay.