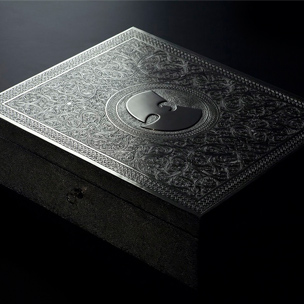 In 1997, on Wu-Tang Forever song “Bells of War” RZA infamously quipped that the next Wu-Tang album would come back with a comet in the year 2000. And while 2000’s The W arrived on schedule three years later, there was no moving of any celestial bodies. Since then, additional Wu-Tang albums have arrived with some amount of internal discord attached, and constantly evolving major label recording industry business models have made dividing royalties nine ways a difficult prospect.

RZA and his protégé Cilvaringz may have found a way to simultaneously eliminate both of the above issues. On March 26, Zack O’Malley Greenburg of Forbes.com exclusively reported Wu-Tang Clan would release a single copy of a secret album tentatively titled, The Wu: Once Upon a Time in Shaolin. The album is being presented as a commissioned art piece, with the intention of increasing its cultural cache as well as fetching a nice price from a potential buyer and a subsequent tour.

Wu-Tang Clan fans know the Staten Island, New York collective kicked off their career shrouded in secrecy over 20 years ago. Each member’s face was both masked and cloaked in a dark hood on the front cover of Enter the Wu-Tang (36 Chambers). Perhaps it’s only right the Clan reboot their legacy in a mysterious way. Through various interviews, more details are emerging about The Wu: Once Upon a Time in Shaolin. Here are the most pertinent facts about the Wu-Tang Clan album you may never hear (unless you’re a millionaire or willing to pony up to see the exhibit/tour).

The Album Container Was Handcrafted By British-Moroccan Artist Yahya

According to a press release for his 2013 “Invisible Light” collaborative exhibition with Mehdi Qotbi at Institut du Monde Arabe, Yahya describes himself as a self-taught artist who anchors his work in a particularly demanding ancestral craft of copperware. He specializes in the convergence of Eastern elegance and Western minimalism. In this case, Yahya crafted a silver and nickel box.

“A lot of the things that I do—from palaces…huge architectural things or tiny, intricate things—have been made by hand,” Yahya told Greenburg. “So I couldn’t really work out how we could do something together.”

After being given complete creative freedom and agreeing to sign a confidentiality agreement, it appears Yahya, RZA and Cilvaringz solved the problem

There Is Only One Known Copy In Existence

According to a 2010 study by DailyFinance.com, the average CD price in 2010 was $13.02 compared to $14.04 in 2000. Adjusted for inflation, compact discs were estimated to cost $17.83 in 2010, meaning fans saved roughly 25 percent compared to 14 years ago. What does all this mean? Various factors are driving down the value of commoditized music. Exclusivity is one of the few ways to raise that price.

“It belongs in an art setting, venue, a museum, or a gallery,” RZA  explained of the one-off art piece in an April interview with HipHopDX. “It’s as rare as any Picasso, any Van Gogh. It’s as rare—as I said in my article—as finding an Egyptian scepter. It’s as rare as the Mona Lisa. It’s rare, yo. It’s only one.”

The Title Is “The Wu: Once Upon a Time in Shaolin”

This one is pretty self-explanatory. Given the understandably secretive nature of RZA and Cilvaringz’s undertaking, it’s safe to assume either one or both of them came up with this title without putting it to a nine-man group vote.

When vinyl was originally en vogue, the average album maxed out at 41 minutes, because that was the maximum length one could fit on an LP without compromising sound quality. With such a high price tag, at least the Wu-Tang Clan’s potential benefactor is getting their money’s worth. Just for comparison’s sake, the longest Wu-Tang Clan album (1997’s double album Wu-Tang Forever) is 112 minutes and six seconds spread across 27 tracks. So someone may potentially be paying millions of dollars for an album slightly longer than Wu-Tang Forever.

As far as concepts go, this one’s a doozy. In order to combat the physical album’s erosion into extinction, RZA and Cilvaringz came up with the idea that this should be a one of a kind object that doubles as an album. As highfalutin’ as that sounds, it may have some merit. Part of what makes art so precious is its exclusivity (an idea that the proliferation of digital music has all but made obsolete) and this may either turn into a final roaring candle flicker before CD’s go lights out, or a jumpstart for how you think about music in general. And, oh yeah, there will most likely be a tour. Stay tuned as to what those ticket prices will be, though.

The Clan Was Not Originally On Board With The Concept

As part of Forbes’ excursion to Marrakech, Cilvaringz spoke briefly on how he tried to explain the concept to the Wu but they didn’t exactly see the vision. Ringz stated, “To every clan member whom I called once the idea was kind of set, it took an hour or more to really break it down. It’s not because they didn’t get it. They got it. But they couldn’t see the greatness of it or the importance of it, rather, until they had the whole picture.” So even the Rap gods themselves couldn’t see the importance of it right away. At least they’re human.

The Album Is Hidden In The Royal Mansour Hotel (For Now)

Fun fact: it’s approximately 3,661 miles from Staten Island, New York to Marrakech, Morocco. On the much less obscure side, major label albums are extremely susceptible to leaks and good, old-fashioned bootlegging. Recent albums released exclusively through Apple’s iTunes such as Jay Z and Kanye West’s Watch the Throne and Beyonce’s recent self-titled visual album have been able to avoid premature leaks. But once they hit torrent sites, thousands of consumers no longer have to bother with the idea of dropping $14 on an album. Extrapolate that problem to a potential multimillion-dollar art piece album, and you begin to understand why The Wu: Once Upon a Time in Shaolin is being kept under lock and key. On another continent.

Add in the fact that International artist, Yahya, revealed that he was hiding the artifact in plain sight at the ultra-swanky Royal Mansour Hotel in Marrakech, Morocco because… of course. The super-wealthy are so used to seeing objects of that calibre that the box has been able to live a fairly quiet life. Though, it’s set to be moved very soon, and considering the secrecy surrounding the project, was probably moved as soon as the story hit. “Wu-Tang Clan Ain’t Nuthing to F’ Wit,” indeed.

Cilvaringz Is The Album’s De-Facto A&R

The album is so secret, and the fear of piracy so intense that Cilvaringz (the albums sole producer and co-inventor) picked all of the beats himself without any input from the rest of the gang. RZA then approved said beats, of course, but then it gets slightly more bizarre. Following the approvals, the rest of the Wu had to lay their verses down to tracks that were similar, but not exactly the same as the one’s that will appear on the record. Seriously, why isn’t Cilvaringz working for a professional clandestine organization?

Even RZA Doesn’t Have A Copy

That’s right. Even Bobby Digital himself was not allowed a final copy of the masterpiece. The only person with access is one Tarik “Cilvaringz” Azzougarh. Not bad for a kid who first met RZA at a concert, where reportedly, his energy was so pure that it caught the genius beatsmith off guard. Fast forward some 17 years and one criminally underrated album later, and he’s the man with the keys to the throne.

With connections to every single major and minor producer on earth, it’s interesting that they’d choose the Watch The Throne alum to mix the album. While he’s well known for his adherence to the rough, gritty soundscape that the Wu were looking for, they could have easily gone with someone who actually made that sound what it was in the ‘90s. Whatever the case, a stellar mix can make or break a project, so let’s hope this whole thing comes up roses… If we even hear it at all, that is.