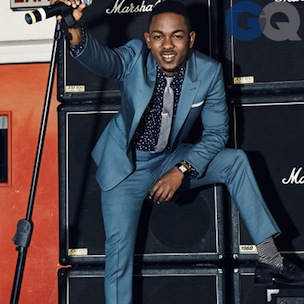 Grammy week is a marathon. For nearly seven days, Los Angeles, California is flooded with album listening and release parties, lunches, brunches, midnight brunches, dinners, conferences, concerts, camels, lions, etcetera—all under the banner of celebrating “Music’s Biggest Night.” In energy, it feels like a shinier SXSW, minus the independent spirit.

From Hip Hop’s perspective, the 2014 Grammy Awards will be remembered for Macklemore & Ryan Lewis’ polarizing win in the Best Rap Album category (The Heist). It’s difficult to remember a year with so many genre-challenging nominees. Drake’s Nothing Was The Same further blurred the line between Rap and R&B. Jay Z’s Magna Carta Holy Grail (or The Samsung Album) completely flipped the script on how music can be bought and sold, forcing the RIAA to rewrite its rules in the process. Kanye West’s Yeezus, with its gratuitous screams and absent snares, completely fractured Hip Hop nation. The aforementioned, The Heist, took a backdoor approach to radio dominance while bumrushing societal taboos on class and sexual orientation through an array of stadium ready anthems. And Kendrick Lamar’s Good Kid, m.A.A.d. City masterfully owned the best of the culture while pushing past Rap’s worst stereotypes. Any argument that Hip Hop is boring is immediately erased when analyzing this year’s field.

Grammy Awards aside, Good Kid…stands alone because of what it means to so many. Hip Hop is interesting because it often seems as if no one likes anything. Old Rap fans hate new Rap artists. Young Rap fans hate old rappers who haven’t retired. Fans of lyricists hate placating radio Rap. Club goers hate rappity-rap-spiritual-lyrical-mircal-whip emcees. Never has the genre been bigger and as diverse as it is today. But despite the differing perspectives, Kendrick Lamar’s debut opus is one of few offerings this year that touches every touch point. Every generation has found something infectious about the album. Commercially, it’s on par with or greater than any of this year’s nominees. Critics are immediate outliers. In that sense, Good Kid, m.A.A.d City is the ultimate rarity: It’s a unifying Hip Hop project. What distinction is more deserving of the title Rap Album Of The Year?

HipHopDX hit a slew of Grammy events this week. Below are a few of the highlights.

BMI’s “How I Wrote That Song” Seminar

Justin “The Company Man” Hunte is the Editor-in-Chief of HipHopDX. He was the host of The Company Man Show on PNCRadio.fm and has covered music, politics, and entertainment for numerous publications. He is currently based in Los Angeles, California. Follow him on Twitter @TheCompanyMan.