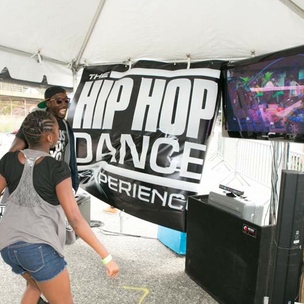 On KRS-One’s song “9 Elements,” the Boogie Down Productions emcee shares his take on the elements that compose Hip Hop as a culture. The first one he names? Dance. “One : breaking or breakdancing,” he rhymes. “Really b-boying, freestyle streetdancin’.” He’s not alone. Emcees have often praised the work of “b-boys gettin’ busy,” as Mos Def once put it on “Hip Hop.” While the culture has gone through various transformations and evolutions since its start out in the park, dance has always been an important element. It may not be done on cardboards or linoleum as much anymore, but it remains a valuable piece to the puzzle.

A new video game, The Hip Hop Dance Experience, hopes to reinforce some of what has made dance in Hip Hop thrive through the years. Break dancers may not rejoice because traditional breakin’ tracks aren’t the focus of this game, but other dancers will be able to enjoy much of what has had many buzzing from Run DMC’s “It’s Tricky” to Drake’s “Over.” Perhaps merging the likes of Run DMC and B.o.B. will refuel the passion for dance that many Hip Hop listeners have enjoyed since body rocking and freezing. Perhaps it will open doors for those who aren’t necessarily into Hip Hop to find joy in the rhythm of these notable tracks. The Hip Hop Dance Experience comes with routines from notable choreographers Laurieann Gibson, Dace Scott and Kid David. The game will also feature various modes, including “Dance Party,” where players can simply dance with a partner, “Dance Marathon” to check stamina or “Power Skooling,” a mode that helps players practice moves with guidance from tutorials. But in true Hip Hop fashion, there’s also another mode: “Dance Battle.”

To go along with the game, HipHopDX created a short list of some of the songs to be featured on The Hip Hop Dance Experience.

There was a time when B.o.B. would stare at the phone on his lap, hoping but not getting any calls back. He says as much on “Airplanes,” showing the struggle he had when trying to break into the industry. Ironically, this song made sure many would call Bobby Ray back. That’s how the story unfolded for the Decatur, Georgia emcee but the song was also intriguing for other reasons. Paramore’s Hayley Williams was introduced to Hip Hop and brought another emcee to the remix in Eminem.

In a few ways, this track set it off, set it off (Jada Pinkett). While it wasn’t the first folks had heard of Drake, it was the track that seriously catapulted him out of mixtape prince and into a more defined role in the Hip Hop globe. It also catapulted something else, hashtag punchlines and super-duper flow debates. But more than that, it showed that Drake had a knack for the appealing tracks, appealing to radio stations, clubs and beyond. So Far Gone brought him out of Degrassi land but “Over” brought him closer to the stardom he would soon achieve and it was the setup for tracks (and plaques) that would follow.

Say what you will about Flo Rida (and much has been said) but he’s consistently delivering Pop/Rap Dance hits. “Wild Ones” is one of his latest, but it doesn’t seem to be his last. Taking a gander at the weekly digital sales charts, one can see just how much damage Flo Rida can bring to a dance floor with songs like “Wild Ones.” Using a quick melodic flow, it seems Flo Rida’s found his pocket in the game, one that keeps his name buzzing beyond Florida.

If you want Hip Hop anthems, it’s hard not to run towards Naughty By Nature. With a penchant for addictive melodies and catchy hooks, N.B.N. have been able to create some of the more memorable danceable songs in the culture’s history. From “O.P.P.” and beyond, Treach and co. were able to become radio mainstays with lyrical swords sharp enough to leave many in awe.

Jay-Z once declared that the “only dudes movin’ units” included Eminem, himself and “Pimp Juice.” The latter, of course, refers to Nelly, who dropped “Hot in Herre” and became a household name for asking people to take their clothes off. While Nelly may not be moving as many units as Jay-Z nowadays, this song sticks out as one that brought the heat to many a dance floor upon its release. It also broke the “herre” into many conversations and rhymes, something clearly heard on Kanye West’s “All Falls Down.”

The repetition of “You’re A Jerk” may not seem like a great idea for a hook but the New Boyz made it work. The group didn’t seem to care about conventional wisdom. They came in the game with this new “jerk” dance, one that would become popularized to “craze” levels. They also brought in their fashion, a mixture of throwback snapback hats and skinny jeans (sound familiar?) which would inevitably influence several others to follow suit. They may not have been the first to ever jerk or the first to ever have this attire but they certainly helped bring all of it to the mainstream public with this song. Perhaps it was their ability to go away from the norm that helped them succeed, or perhaps it was just an undeniably infectious tune.

Much like “Over” brought Drake out of the mixtape world, “Moment 4 Life” placed Nicki Minaj center stage. Grandparents and children learned this song, making Minaj one of the most sought after emcees in the genre. With fellow Young Money star Drake backing her on the track, Minaj showed she could hold her own and make an impact with her rhymes and melodies. The song wasn’t just a danceable cut; it was also motivational and empowering for many of her fans beyond the Barb queendom.

Straight from the slums of Shaolin, the Wu-Tang Clan had success but their critical acclaim didn’t always equal nationwide dance floor love. That changed with this Kelis-assisted cut. “Got Your Money” brought that Wu flag into clubs and gave even more light to what the W was doing in the underground for years, a gateway for some to see the intricacies of 36 Chambers and more.

Q-Tip didn’t have to do this. He already reached iconic levels in many peoples’ eyes with his work as a part of A Tribe Called Quest. When your resume includes The Low End Theory and Midnight Mirauders, there isn’t much else you need to do. But Q-Tip wasn’t necessarily satisfied with ending his work there, so he jetted off to solo land. “Vivrant Thing” was a departure from much of what he had done, but it worked for Tip. It became a hit, with a head nodding beat by Jay Dee (l/k/a J Dilla) and Tip, proving the Abstract could do it alone too.

It may have been tricky for Run-DMC to rock a rhyme, but they made it seem effortless. Released on the group’s 1986 album, Raising Hell, the song became a strong and lasting hot. It carried a contagious jingle of a chorus and the hard hitting rhymes over head-banging instrumentation. It may have been tricky but it managed to make many rock to the beat and recite those rhymes, which were, of course, “very vital.”

This wasn’t supposed to happen. Snoop Dogg had his success in the early ’90s, becoming one of the major West Coast representatives in the genre, a significant element in the rise of California’s presence and influence in the game. But once a G grows, the mainstream game usually isn’t down with the change. While 2002’s “Beautiful” brought Tha Dogg back into the spotlight, 2004’s “Drop It Like It’s Hot” really cemented his longevity and chart topping appeal beyond his young pup years. He managed to make it cool to be a father of teenagers in this video, allowing his family to participate in the dance-floor friendly visuals while still having his anti-police, pro-ganja edge intact.

With “Lean Back,” Fat Joe officially went from Diggin’ In The Crates to dancing in the clubs. Few can deny the infectious hook, the easy-to-follow moves and the Scott Storch drums. The track brough Fat Joe into more households than ever before, introduced many to Remy Ma and allowed Storch to have yet another hit in his belt. While the song became the target of jokes of “Macarena” proportions by some, it can likely still make a dance floor follow its hook’s instructions today.

Some have argued that there is no song more important to the growth of the culture. Sugarhill Gang’s “Rapper’s Delight” was not the first Rap song ever made, but it was one of the first to open doors in a way that hadn’t been seen before. It has become a highly discussed and debated topical piece, from the origin of the lyrics to the impact of the song. But for many, none of that matters more than the appeal it still carries. Once the song starts, most know to start rhyming along and the breaks on the track can instantly make most b-boys start rockin’.

(** Denotes songs that will appear only on the Xbox 360 version)

Andres Vasquez has been contributing to HipHopDX as a staff writer for over a decade. He is also an educator and youth-leader. He is based in Los Angeles, California. You can follow him on Twitter at @AndresWrites.